The ZOTAC NITRO device is itself very simple. It's basically a VFD display to show stats and info, and three buttons along the lower edge to control everything. The shell is a rather vibrant orange, which is one of ZOTAC's signature colors. 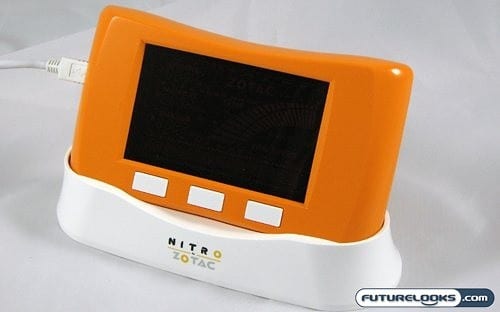 And like any other external display, you need a place to put the NITRO so it doesn't get knocked around. I've played with A LOT of external displays in the past, and the mounting options many have employed run the gamut from the "leaving you to figure it out" method (aka nothing), to stick on Velcro, to double sided tape. Rarely do I see a decent mounting stand included. The stand included with the NITRO supports the unit well, and allows you to push buttons without it crawling across your desk.

Called FireStorm, this is the software that essentially makes the NITRO light up and go. This stand alone applet allows you to modify options and make the same changes in software that you can make on the device. It's also the first thing we're going to look at when we dig into testing and use of this device.

Loading up FireStorm, you immediately notice two things. The first is that this program allows you make the same changes that ZOTAC touts you can make with the NITRO itself, essentially emulating programs like RivaTuner and the overclocking tab of the NVIDIA Control Panel. However it only emulates those programs in the area of overclocking, and does so in a way that ZOTAC hopes will reach out to those who want to try overclocking but don't know their way around the ForceWare Panel or other tweaking programs.

As a result of this scaled back approach, the second thing you notice is that FireStorm runs with very little footprint on system resources. This is good, as the program is required to run the ZOTAC NITRO. Even after running it for a few days, I didn't notice any huge Firefox-like memory leaks with the FireStorm program.

Under the options for this program, you'll find check boxes to toggle if you want it to start with Windows, as well as an option to remember and re-apply your current overclock at start-up. This feature is a response to the one problem with the FireStorm software and the NITRO; it doesn't maintain your overclock settings between boot up sessions.

Once you move past the FireStorm application and load up your favourite game, it's time to really see how well the ZOTAC NITRO works. On levels of both functionality and convenience, the NITRO is simple and easy to use. To select and change each option, you press the Set button. Once an option is selected, you get a + and - button, allowing you increase or decrease the clock speed or fan speed of the card. You can also setup overclocking profiles, saving a particular group of settings for later use. 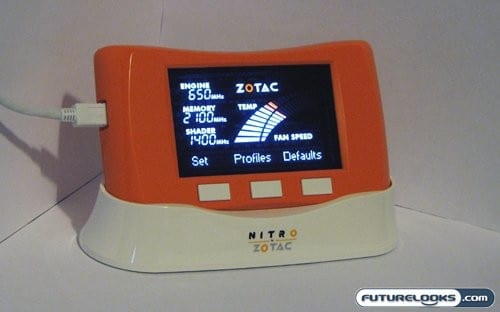 Finally should you muck everything up, you can simply press the Defaults button and set everything back to . . . well . . . the default settings. We didn't perform any benchmarks, as this device doesn't improve the overclocking ability of your card. However, as we ran through 3DMark Vantage and Team Fortress 2, we found that we could incrementally increase the speed of the video card and see near instant results.

Now through out all this, the problem of the NITRO only working with ZOTAC cards was sticking in the back of my head. Our test rig uses a ZOTAC GeForce GTX 260 AMP! Edition video card, so I of course didn't experience any problems. I decided to swap that card out for the older Foxconn 9800GTX-512N Extreme OC video card we reviewed a while back, and then plugged in the ZOTAC NITRO. I did get an error from FireStorm on boot up, but I simply held down the Shift key while clicking on OK, and got all the same stats and functionality on the NITRO with the Foxconn card. Your mileage may vary with what functionality is available, but the device does have the possibility of working.