The sleeved cabling was a nice touch by Zalman, which made it easy to organize and separate all the power cables.  It’s nice to know that even on a lowly 360 watt power supply, they still took the time to add this higher end feature. Even after hooking everything up and tidying up things by hand, it didn’t seem that I needed to use Zap straps or the Velcro straps at all.  The sleeved cabling definitely makes things look tidy on their own, though tying away the cables anyway will allow you to increase airflow inside the chassis.

The number of different types of power connectors was nice to see in the Zalman ZM360B-APS power supply. Connectors include ones for dual PCI Express VGA power, dual +12VDC output, and SATA and standard HDD power connectors. Having these connectors make your video card and storage options a lot more flexible since you can run a higher end video card and either IDE or SATA drives right out of the box.  I would not have expected to see these connectors in an entry level power supply Zalman Technologies, but here they were. The Zalman ZM360B-APS power supply seems to be a logical upgrade for any old power supply that has given up the ghost. 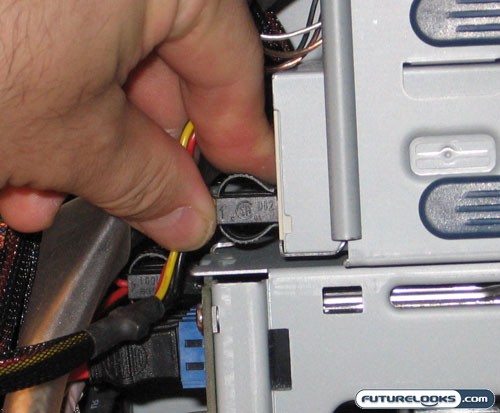 To test the how well the Zalman ZM360B-APS power supply would handle while being used on a real computer, I assembled a system that I would be used in most normal multimedia situations, but it definitely no gaming machine. The following components were used in the build:

Our operating system of choice was Windows XP Pro with all the latest service packs applied.

To test the performance of the Zalman ZM360B-APS power supply, an idle environment and loaded environment were established.  The idle environment was established by allowing the computer to sit powered on for a minimum of 30 minutes after initial logon into the Windows XP desktop. To load the computer we ran Symantec 360, Futuremark Corporation 3Dmark06, and Passmark Software’s BurninTest 3.5.  We also did a disc copy from two optical drives and played music through media player from the hard drive.

The voltage readings were taken by using a digital volt meter taken under idle and loaded environment. A sound meter was also used to measure the noise level coming from the rear of the computer at a distance of 6 inches away. With all these programs running, how did the Zalman ZM360B-APS stand up and how loud did the power supply get when loaded?  Let’s find out!

The Zalman ZM360B-APS power supply is also very quiet. The readings were taken 6 inches away from the back ventilation area of the power supply. When loaded, the noise level only increased by 2.5dBA and the noise produced was not annoying by any means. The majority of the noise generated likely came from the programs accessing the hard drive and the CPU fan increasing speed to meet demands.  None of the noise seemed to actually be coming from the power

The large fan in the power supply did not seem to be moving very much. A visual check of the fan showed that it did not speed up or slow down during the test.  I was expecting that the fan would speed up to deal with the increases heat and demands, but instead, it barely looked like it was moving at all.

The Zalman ZM360B-APS is an attractive power supply despite its small power rating. It is a good choice for anyone looking to replace their original equipment power supply and has a great deal of flexibility for future expansion. The polished and finished look of the metal is one of the great features in this power supply and gives it a very performance oriented look.

The added value of having all the extra power connectors makes the Zalman ZM360B-APS such a great purchase. The two video card power connectors allow anyone to add an extra video card or two into their computer without upgrading to a higher wattage power supply, within reason.  The most high end cards will still require a bit more juice at full load.

The stable performance under load, sleeved cabling, extra assortment of power connectors and the attention to detail on the finish of the power supply is why the Zalman ZM360B-APS power supply gets a rating of 9.0 out 10 and a full recomendation by me.