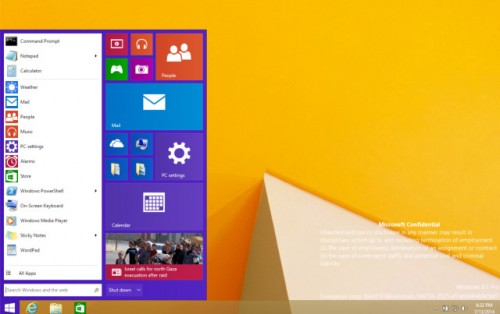 Recently, we reported about some possible changes Microsoft may be planning for Windows 9. It should also be very clear the primary image there was a modified Windows 8 box as we didn’t have a real image of the Windows 9 box to show you. This may have changed with possible leaked images of the Windows 9 RC version. And it honestly looks like Microsoft has found a nice compromise.

One of the most, if not the most, complained about things when it comes to Windows 8 was the missing “Start” button. Microsoft not only plans to return the “Start” button to us in Windows 9, but merge it with Metro UI in the above hybrid look. We think the look is very interesting, but is a bit of a step back with an extra step of “press Start button”  being added to every task. We hope the leaked look of Windows 9 is an option for those without a touch screen because the lack of choice was the real sin of Windows 8.

In fact, we at Futurelooks want to know which UI do you like best: Classic, Metro or this new hybrid? Let us know through the comments below!