Now, as a true Mario Bros. fan, you gotta love the “ding” sound when a precious coin is added to your ever growing stash.  The only problem, in my opinion, is that you don’t hear enough of that.  Over the years in the Mario Bros. genre, it has moved away from the basics of collecting coins, getting more lives, and saving the smokin’ Princess Peach. 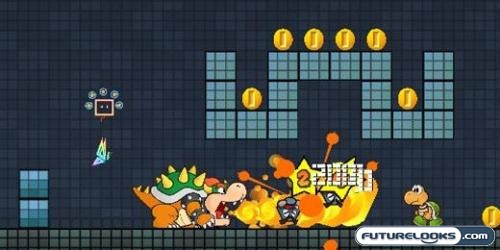 The voice-overs in Super Paper Mario are few and far between, but the whimsical actions of your characters will hold your interest.  The only character that actually has a voice and speaks during the game would be Mario.  He doesn’t really talk, but he makes funny noises that make me laugh.  But, don’t be too disappointed, Mario is not the only character that makes noises.  One of them passes gas loudly in order to escape, which definitely adds to the humour of the game for those immature adults like me.  Even Bowser’s heavy footsteps bring a smile to my face as he lumbers past the screen.

All-in-all; what more can you ask for from a game that has been around since before I was born?  Crisp sounds, interesting background music that suits each level you play and each area you’re in, funny tid-bits, and quirky expressions are the make-up of the audio plethora that you will find with the game.  But, enough about the sound, let’s move onto the meat!

This game has EVERYTHING.  You have the basic jump attack.  More often then not, this attack will work.  But if that fails, each one of your characters has an extra ability that you can utilize to upset the baddies.  Now if that fails, you have “super” friends that give your characters the ability to pick up baddies and throw them at another, or butt stomp them (my fav!), or many other abilities and powers that help you progress through the game.  Again, if that fails, there are a TON of power-ups that you can employ that will help weaken the baddie or make you invincible, and by invincible I mean turning you into a giant original 8-bit Mario Brother that can bust thru anything just by walking through it, or by giving you a bunch of smaller 8-bit plumbers that surround you like a protective shield. 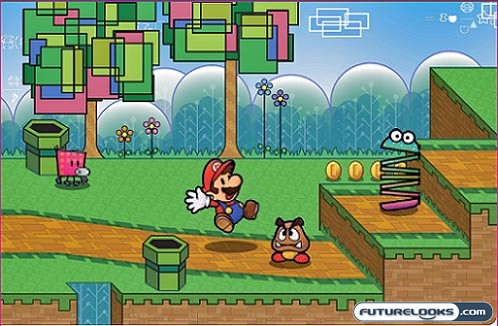 Each level in this game is designed to be challenging yet simple enough that you’ll want to smack yourself for not thinking of it the first time.  You start the game with a single Pixl buddy and as you progress through the game you’ll encounter more friends that will help you find new treasure or solve puzzles.  The puzzles aren’t too difficult which allows all ages to play.  Even my 50+ year old father can get the hang of the game without losing interest in it, and my 8 year old cousin is just laughing because he can do things that his uncle can’t!

Although, I do find that with all the Mario Bros. RPG style games get a little repetitive after a while, this game does have some re-playability.  As you progress through the game you begin unlocking “secret” areas within the cities where you can play mini-games.  Some of the mini-games are similar to what you would find in the Mario Party game series.

Super Paper Mario does not utilize the functionality of the Wii-mote and nunchuk like I thought it would.  The nunchuk isn’t used at all which disappointed me a little, and you turn the controller horizontal so that it feels like you’re holding the original two button controller, but you do require the pointing ability of the Wii-mote now and then, and the motion sensing capabilities.