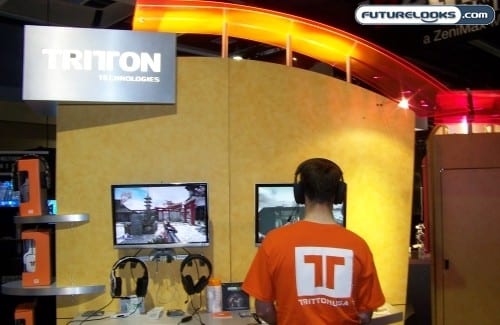 A couple months ago, I met up with Tritton Technologies at PAX 2009. PAX is about both big and independent game creators showing off their latest and greatest creations. Most importantly, you get to play them, allowing consumers to experience  your work in hopes that they will soon rush out to buy the title. In order to make the best impression, it’s extremely important that the player gets the whole experience and that’s where we often see audio over looked. Seriously, can you imagine trying to play something like Borderlands or Darkest of Days on a $10 headset? I don’t think so!

Here at Futurelooks, we appreciate the best possible audio experience and apparently so does Tritton Technologies. Allow us to present to you, their AX51 Pro Headset. 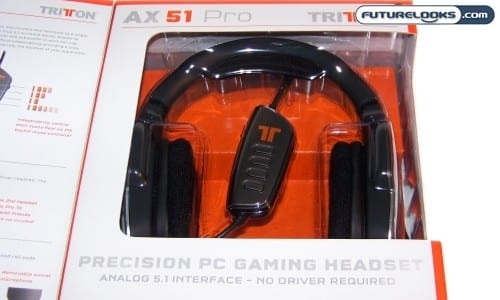 There are three major features built in to the AX51 Pro Headset. First, the 51 denotes the 5.1 experience offered by the AX51 Pro. This is made possible by the specially designed In-Line Controller and independent Drivers that separate audio giving it that 5.1 experience.

There’s a 1x40mm Front, 1x30mm Rear, 1x30mm Center, and 1x30mm Subwoofer built in to each ear piece. The Front, Rear, and Center produce 20-20KHz frequencies while the Subwoofer produces 20-120Hz which any audio-phile knows is the common range of any Sub. At 20Hz, the headset should produce some crazy low thumping.

The audio can be manipulated by the In-Line Audio Controller. It allows you to control the Master Volume as well as each individual Sound Field, or channel, control. It’s as easy as selecting the desired channel with the Controller while using the toggle switch to find the desired volume.

Based on this design, there can be no doubt that the AX51 Pro is specifically tuned for PC Gaming. If it’s console play that you need, rest assured they offer an equally impressive AX180 Headset, which we’ll get our hands on soon.

What’s in the Cool Box?

In the non-blister packaging, you’ll find the head set connected to an amply long, high quality cord. There’s a separate boxed power adapter which makes it possible for the head set to offer the best amplified audio. 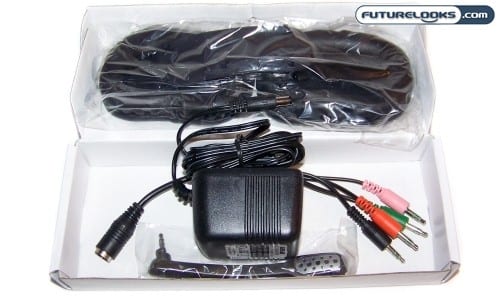 In another smaller box, you’ll find the In-Line analog jack adapter that plugs directly in to your motherboard or audio card’s audio ports. They’re color coded so that you don’t have to do anything but plug and play. And, of course, can’t forget the Mic boom which comes as a separate detachable piece. Also included are two extra replacement earpiece covers for when they need replacement after years of LAN Party abuse. I find this to be a very nice touch in an already nicely designed head set.

My initial impresson was…”Now that’s a headset!” and with good reason. 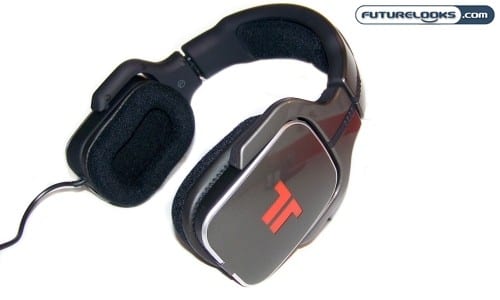 The AX51 Pro sports a polished, gun metal gray finish that really stands out. Right away, these things made me want to jump straight to testing. But, we must continue with our initial impressions. Though you might expect the set to be heavy quite heavy, the fact is that they are surprisingly light. Despite the use of lighter weight materials, nothing feels thin or frail at all. I found them to be a very sturdy with some initial bending and twisting.

Throwing them on my head, they seem quite comfortable. The wide, black well padded head band displaces the weight evenly and helps assist holding them in place. The band doesn’t apply too much pressure on the ears at all. The cups and band work together well fitting the ears quite nicely further complimenting the overall comfort. The real test will be whether they feel the same after extended periods of gaming.