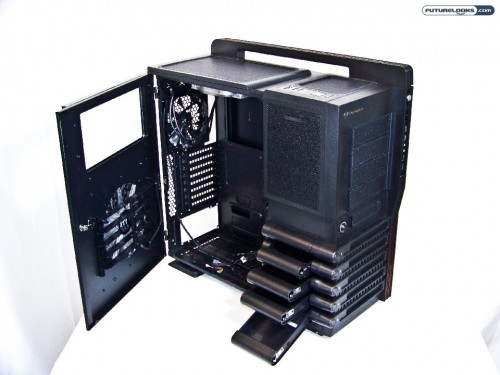 You no doubt want to know how the installation went and if there were any issues. About the only thing I can nit pick about would be how the five removable trays function. They tray holes line up fine with the hard drive, but getting them out can be a little fussy. Sometimes the button needs a harder push and a bit of finesse to get the drive to unlock. 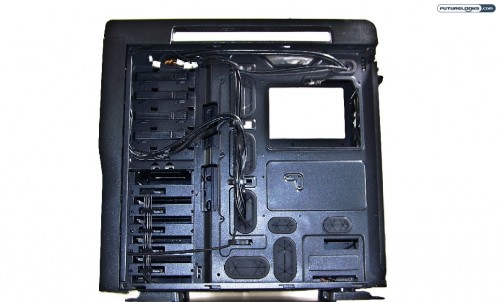 On the other hand, installing the test system in the chassis is very easy. The motherboard cut out is so large that any CPU socket placement on any motherboard will fit in this case without removing the board. There is ample room for hiding a great deal of wiring behind the motherboard tray and the case will help you make any configuration look superb and tidy. 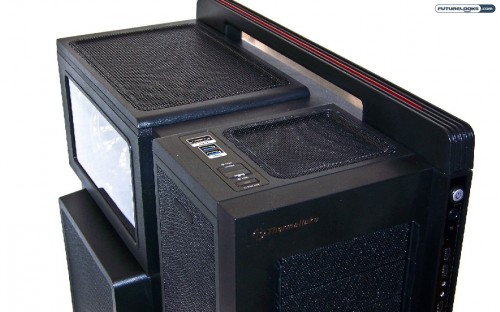 The head set mount on the side of the case actually came in handy. It’s completely removable too if you don’t need it or if you’re transporting the case so it doesn’t snap off. When most everyone is done using their headsets, they put it them on the desk and quite often, at least around here, they get knocked off. The hangar actually kept them off the floor on a fairly consistent manner, preventing headset damage.

Overall, it’s a fairly easy to build with case even with a minimum amount of cable tidying. As you can see, the cavernous interior really helps beginners and enthusiasts alike, have a great system building experience. 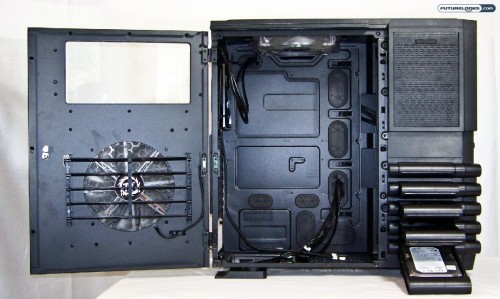 Part of our thermal testing includes checking out the air flow design within each high end computer enclosure. The Level 10 GT pulls a massive amount of air through the front and side panel fans. Because the rear fan isn’t as large, most of the air escapes through the rear top. This might prevent the right amount of cool air from hitting the CPU heat sink resulting in higher temps. Let’s find out if this is true. 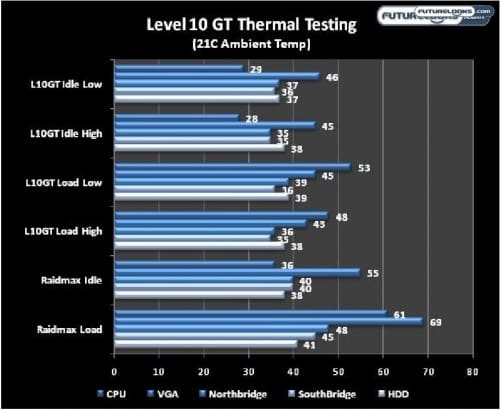 Based on our numbers here, it would appear that the side fan helps make all the difference. It sends more than enough air in on the video card area which has no other place to go than up through the CPU and out the top. The front fan does more to help push that air towards the back, thus lowering system temperatures.