Taking a Peek Inside the Thecus N5200B Pro 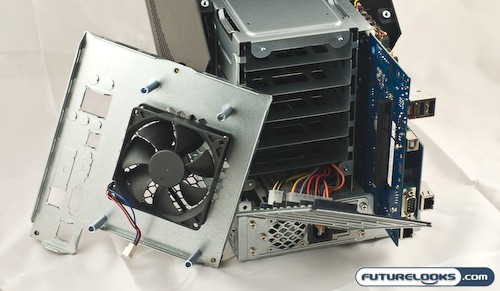 Disassembling the N5200B Pro was disturbingly easy. I had the whole thing in pieces in seconds after getting the three screws backed out. They are thumbscrews no less, offering a tool-free entry. Here you can see the 120mm fan that keeps the unit cool under regular operation. I did like seeing that the fan itself was easily user replaceable and adds to its potential user serviceability. 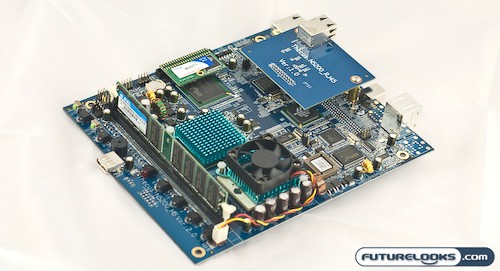 A few more seconds later, I had the guts layed out on my table and as suspected, it is definitely more computer than appliance. The system relies on a DDR 512MB memory module and a Celeron ULV 1.5GHz processor to power itself. A small cooling fan is attached to the CPU. Based on the modularity of these two main hardware pieces, you can see the upgrade potential built into the N5200B Pro. I’m sure people have attempted upgrades to a 2GB module and a Pentium III M CPU already. The board also stores its operating system on a 128MB Flash Disk Module plugged into an IDE header. The second Gigabit Ethernet port rides on a daughter card above the standard PCB.

Based on my inspection of the innards, I was fairly pleased with the build quality of the inside of the device. With easily replaced parts due to its ease of disassembly, the N5200B Pro does have the propensity to be inexpensive to keep running as surplus parts should decrease in cost over time. This is a good thing as a device like this tends to stick around for the long haul.

Although you can start with just a couple drives and add drives later, we’re just going to skip that and just start the ball rolling with a set of FIVE Seagate ES.2 1TB 7200RPM SATA Drives courtesy of our good friends at Seagate Technology. 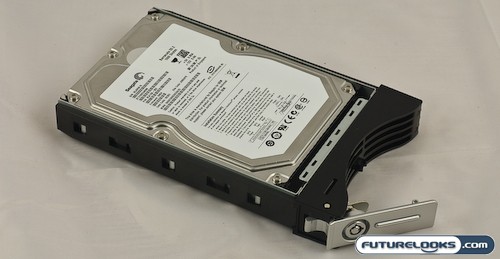 Before all the fun begins, you’ll need to get your drives nestled into their hot swap drive bays. We repeated this procedure five times because we had five drives. 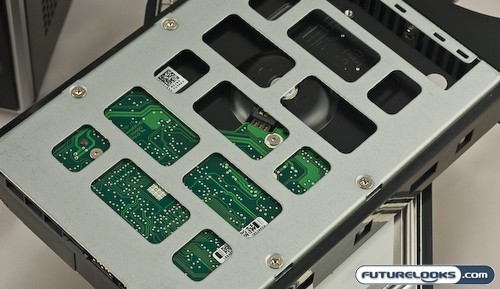 Since you’ll never see them again once they are inserted, I wanted to point out the swiss cheesing in the base of the drive bays. This will help with a bit of the cooling rather than covering them up and letting the poor drives roast under pressure. You can see here that the mounting screws fix to the base of the drive to keep them in place. All that’s left is to plug in the power cord, connect one or both of the Gigabit Ethernet ports to your network and power it up.