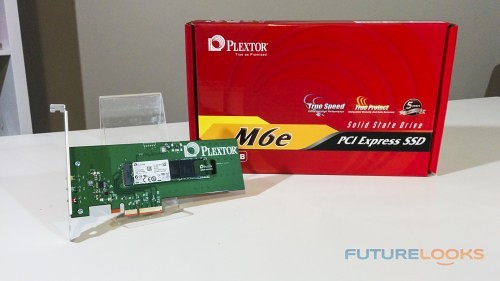 When it comes to DIY performance upgrades, the two biggest strides have been made in high performance graphics cards, and the mass market adoption of SSDs. While most high performance GPUs still only need a spare PCIe slot, and adequate power, for it to give you a generational boost in performance, SSDs, however, have changed with the recent unveiling of the Intel Z97 and X99 platforms, offering higher performance than before. The new M.2 SSDs, no bigger than a stick of gum, shame even the fastest 2.5 inch SATA units, and unfortunately, don’t just “plug in” to older motherboards. That’s why the Plextor M6e is such an interesting product to those of us, still hanging on to an “old skool” platform. 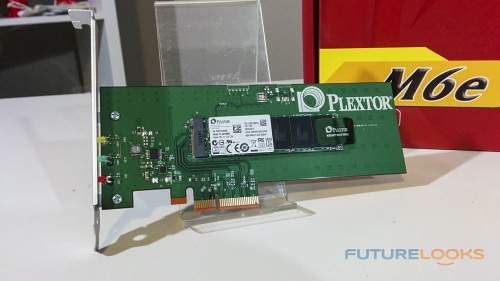 The Plextor M6e is essentially, a PCIe Gen2 x2 card with an M.2 slot, and one of the company’s M6e M.2 2280 SSDs pre-installed into it from the factory. This allows older systems to use the latest SSD technology, without having to completely replace an older system. We reviewed the bare M.2 2280 version recently, and came away very impressed with the performance for Intel’s next generation platforms, and it was priced reasonably against the top end SATA SSDs. So we’re eager to see how it does in our “old skool” Intel X58 platform, which will be the subject of our testing.

The adapter itself is a half height card, with a full height bracket attached. LEDs on the back indicate read write states, and the card physically fits into any PCIe Gen2 x2 and above slot, without the need for external power. This version of the M6e comes in three models: 128GB, 256GB (as tested), and 512GB.

In terms of performance specs, as indicated above, the adapter seems to provide no added overhead as the specs seem nearly identical to the M.2 2280 version. The PX-AG256Me, which we’ll be testing today, is in the middle, in terms of sequential write speed, but all the products have the same top read speeds at 770MB/s, which far exceeds even the highest end SATA SSDs on the market.

The entire series offers a high level of system compatibility with support for all flavours of Windows 7 and up, including various distributions of Linux. TRIM, SMART, NCQ, including 256 bit AES encryption are all part of the list of features. 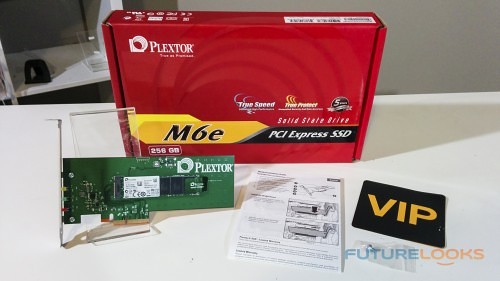 The Plextor M6e doesn’t come with much in the box. But it also isn’t needed as the card is a complete plug and play solution, and should be recognized like any other SSD. You’ll get basic instructions, including an invitation to their VIP Club. 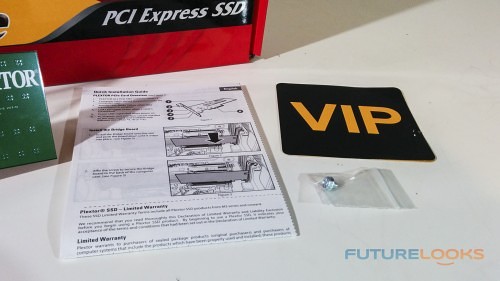 Most curious was the inclusion of a slot mounting screw. While most cases are tool free, the Plextor M6e could be potentially carrying  your OS or valuable data. So having it fixed with a screw, might not be a bad idea.

Let’s throw the Plextor M6e in an “old skool” rig that we still rely on every day, and see what happens!