The N5200B Pro feels like a pretty solid piece of equipment, but has some areas that make it feel a little bit lesser than it should be. 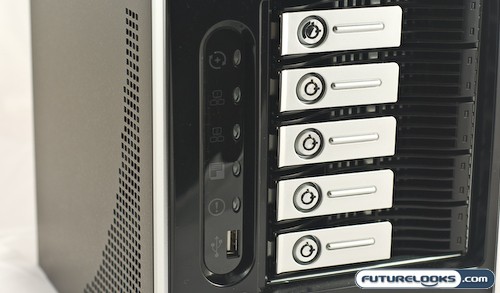 For starters, the drive bays are made of a combination of plastic and stamped steel trays. Even fully locked up in N5200B Pro, they jiggle. As we’ll find out later, even with drives installed, they still jiggled. Although if you leave it alone and don’t jiggle them, they won’t bother you, but there is an opportunity to introduce some vibration dampening into the drive trays. There was none, not even a thin layer of rubber to keep things vibration free. I also found it quite disturbing to see that the lock mechnisms could possibly be defeated by hand, potentially making the bays inaccessible to both you and the vandal.

On the subject of security, because devices like these typically contain important files, the fact that you could open the thing up without a key from behind is rather frightening. There was no mechanism in which you could throw a padlock on it and the screws can be removed with just a simple philips head screwdriver. There isn’t even a laptop lock port so you could at least keep it attached to something. 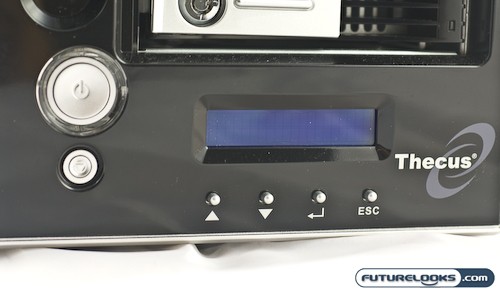 Security issues aside, the N5200B Pro does have a nice LCD display that gives you the 411 on drive status and other useful information. Buttons underneath allow you to cycle through the information. A main power and rest switch sit to the left of the display, just like a regular PC, which isn’t too far from the truth, as we’ll find out.

The left side of the N5200B Pro is where you’ll find the operational status lights and a USB port for plugging in your USB thumb drive or camera. Also here, you’ll see the two Gigabit Ethernet activity lights for each port. When both are on, that means both ports are working. When one is on, you need to figure out why the second one isn’t working. The drive bays themselves also employ an LED system to indicate status. 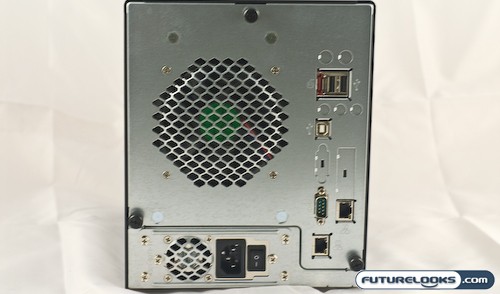 Moving to the back, you’ll see the main cooling fan including two additional USB ports, eSATA port, USB port for direct connecting the NAS to a PC (yes, you can do that) and the two ethernet ports. The lone legacy serial port is for use with some UPS devices. The powersupply is at the base of the unit and adopts a very rack server like appearance. It also incorporates its own fan unit so that if the main fan fails, the system will still operate and can affect a proper shutdown. The main power switch is also attached to it.

As mentioned earlier, there is nothing keeping anyone from breaking into the back of this unit as there are no provisions for physical security measures like a padlock. So I guess it’s only logical that we investigate the guts of this device next.