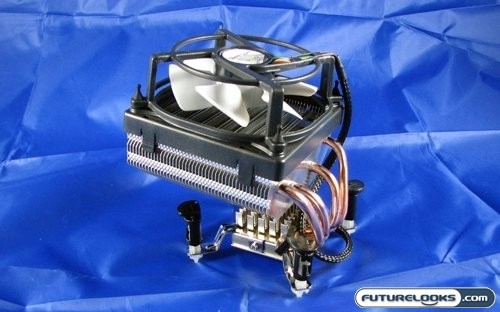 When we last checked in with GELID Solutions, they were just starting out. The company was only a year old, and wasn’t all that well known yet. The only product they had sent us was some thermal goop, which we actually found wasn’t too bad. Well GELID has been quite busy. Today we’re taking a look at their first CPU cooler, the Silent Spirit Quad Heatpipe CPU Cooler. The cooler employs 4 heatpipes and a raised set of heatsink fins to attempt to cool your CPU quietly and effectively. The heatsink is cooled by a 92mm PWM powered Silent 9 fan, and is rated at a fan speed ranging from 900 RPM to 2000 RPM. Noise levels hit 11 dBA to 23.5 dBA respectively.

As for pricing, it’s hard to determine as the GELID Silent Spirit is only available from one online store in North America. Our good friends over at NCIX.com have it listed for $34.99 CDN, which puts the Silent Spirit in close competition with the venerable Arctic Cooling Freezer series. That’ll be handy, as both the Arctic Cooling Freezer and the GELID Silent Spirit share similar specifications. They both sport heatpipe designs, silent fans, and well thought out fin design. They’re also both mid-range coolers, which will make things interesting when we put the Silent Spirit up against some of the coolers we’ve previously reviewed on our hot-running test bed. For more in depth specifications, you can check out the product home page. 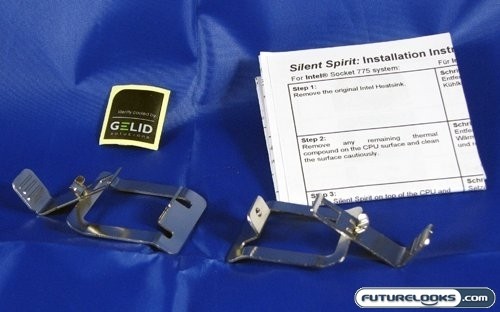 Inside the box, there are mounting brackets for both Socket 775 and Socket AM2/AM2+, and they’re designed to use the OEM mounting bracket that is already installed on your board. Socket 939 users aren’t left out in the cold either, as the included clip should connect to that bracket as well. As for paperwork, GELID included a single sheet installation guide as well as a case badge if you want to advertise your cooling solution of choice. GELID also sends word that a new mounting bracket for the INTEL Socket 1366 will also be available in the near future.

The Silent Spirit Up Close 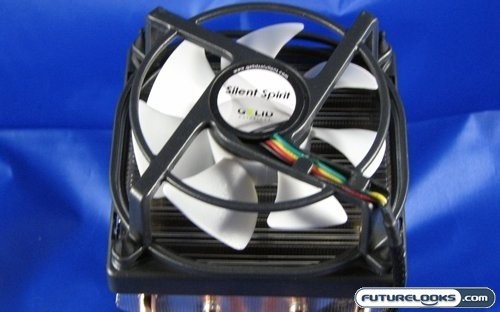 As noted, the fan tasked with cooling the heatsink portion of this CPU cooler is billed as a silent model. The reason this fan is able to remain silent is due to its design. One of the main causes of noise in computer fans is the turbulence generated between the tips of the blades and the walls of the fan housing while the fan is spinning. The model of fan used for the Silent Spirit employs a design that eliminates this housing, which eliminates the noise. The fan is also mounted using rubber plugs, which will reduce noise further by absorbing and eliminating vibrations. 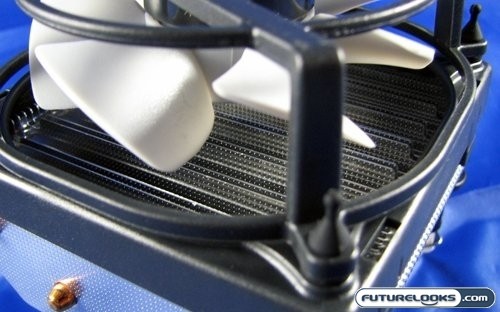 The multitude of fins on the heatsink portion of the Silent Spirit should further enhance its cooling abilities. To effectively cool a CPU, an actively cooled heatsink (ie: one with a fan) needs as much surface area on it’s cooling fins as possible to dissipate the heat generated by the processor. This is done by either adding lots of fins, or adding material to the fins to increase their surface area. Since the Silent Spirit is a relatively small cooler, GELID went with the latter choice. They added a whole bunch of bumps to the surface of the heatsink fins. They also staggered the height of the fins across the length of the heatsink. These two engineering decisions should, in theory, give the Silent Spirit a good boost over other similar CPU coolers.