Search
Home
Reviews
Intel SSD 750 Series 1.2TB PCIe X4 NVMe Card Review
As it stands, the Intel SSD 750 PCIe 1.2TB is the fastest workstation, quasi-enterprise PCIe SSD available that doesn't carry an enterprise price. It's super easy to setup and manage. Just keep an eye on it because it's absolutely worth its weight in gold.
Pros
Cons
2015-04-02
9Overall Score
Prev1 of 2Next

There are three main SSD form factors available today. The first is the standard 2.5 inch SSD, the second is the stick-of-gum sized M.2 PCIe SSD, and finally we have PCIe SSD cards, which are more commonly found in servers in enterprise. 3.5 inch SSDs are most popular, offering great performance and value, and the new M.2 PCIe SSDs have homes in both new motherboards with the new slot, and even come with adapters, allowing you to reinvigorate an older system.  Finally, we have the PCIe NVMe SSD cards that fill a large void for pro users willing to spend more for top performance for desktop use.

The recently announced Intel SSD 750 Series fills that void, and comes in two flavors: A PCIe 3.0 X4 card  for top performance, and a 2.5 inch version. Today we’ll looking at the PCIe version that goes up to 1.2TB, and offers high performance without the enterprise cost. Just how high a performance and cost? Let’s get some answers!

Intel SSD 750 series PCIe 3.0 X4 1.2TB card is best suited for your empty PCIe X4 and above slots, found on most motherboards made within the last five years at least. Naturally, the performance of the card is going to be higher than the 2.5 inch version, and thus, will be the focus of our performance review. 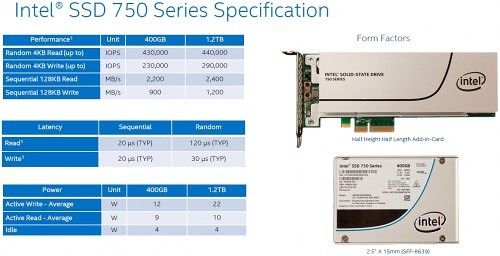 As you can see above, the PCIe version out-muscles the conventional 2.5 inch version in the same series, but it does put up a fight. Intel also launched two new cables to pair with the 2.5″ SSD. One is the SFF8639 (small form factor) desktop cable option and even smaller SFF8643 cable option for mini-ITX systems. These will properly power the 2.5″ SSD and help save a little space. That’s all we’re going to say about this one for now.

The Intel SSD 750 PCIe utilizes NVM Express high performance 20nm NAND best suited for multi-core systems. If you recall your SSD history, Intel launched similar NAND in their SSD 520 which was necessary in order to stack chips for higher capacities. With the PCIe 3.0 X4 card, space isn’t a problem. However, the 20nm NAND should make higher capacities feasible in the 2.5″ SSD. Could we see a higher capacities later? It’s very plausible.

All Intel SSD 750 PCIe 3.0 X4 cards will ship with both a PCIe low profile and conventional slot cover. This is useful for installing into systems with low profile slots only. The only thing you need to do is make sure you have an appropriate PCIe x4 and above slot to plug the card into.

The final specification is of course the price. With 1.2TBs of storage onboard, the Intel SSD 750 series PCIe x4 card will retail for around $1000 US. So you’re looking at about a buck a gigabyte, putting it on the more premium side of the consumer fence. However, you also get an enterprise grade 5 year warranty to go with that. 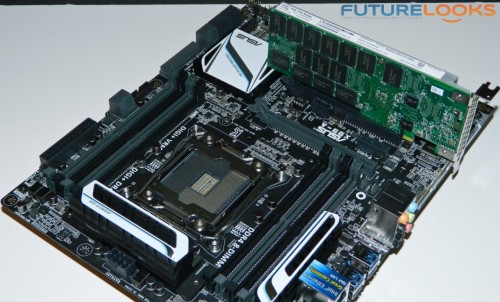 In order to test out the Intel SSD 750 series PCIe x4, we assembled the following test system, on an Intel X99 platform.

We updated all software to the latest versions, including the latest motherboard BIOS, Intel’s Management Engine software, Chipset driver from ASUS and the very important Intel NVMe Driver 1.1.0.1004-x64 driver.

Since we have seen the 2.5 inch SSDs a thousand times, we’re happy to look at something different for a change. The card has an attractive aluminum heat sink stretching across the length of the card. Our unit came pre-installed with the shorter PCI bracket. However, just a couple Philips screws later, and the adapters were switched, allowing us to mount it into a conventional ATX test bench.

Besides just installing the card and loading drivers, like you would any graphics card or audio card, you have some options that you can tweak with the included software.

Intel’s SSD Toolbox is a very handy tool to use with the SSD 750 PCIe card. It’s proven useful keeping SSDs clean and running at optimal speeds despite capacity loads. It’s just too bad that so few intuitive tools like this are bundled with SSDs.