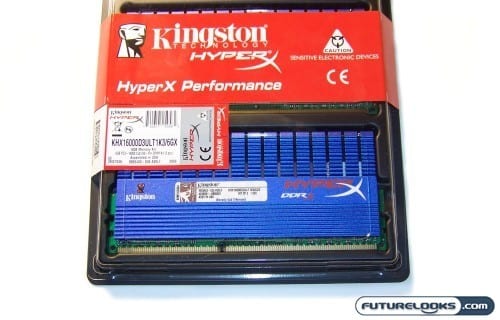 More and more users are finding 64-bit Operating Systems like Vista to be quite beneficial and compatible for their computing experience. This is especially true for professional users who are using the latest Intel i7 systems. The i7 system is such a fast number crunching beast that adding a 64-bit OS and more than 3GB of Triple Channel memory really allows the system to do an extreme amount of work in a shorter amount of time.

If you’ve been following the i7, then you know that it’s anything but boring and has proven itself to be a capable in the realm of overclocking. In order to reap the full performance benefits, one needs memory capable of keeping up or exceeding the overclocked processor’s speed. Kingston Technology has made this possible by extending the HyperX series to include their new HyperX 6GB 2000 MHz Triple Channel Memory. Today we’re going to check out what it can do for your “Pro” system.

How Does Triple Channel Work?

We’re glad you asked. The new I7 processor has an Integrated Memory Controller (IMC) that simultaneously accesses three memory sticks at once. The IMC controls the data flowing to and from the Triple Channel Memory. The result is a certain amount of memory bandwidth which varies depending on the frequency of the installed memory. Naturally, lower frequency memory offers lower memory bandwidth while higher frequency memory offers higher memory bandwidth.Think of it as having three hands to accomplish an objective rather than only two like the previous generation processors.

In this particular case, we have three hands moving at 2000 MHz versus three slower hands moving at 1333 MHz. All of that memory bandwidth allows the I7 to perform a great deal more executions than previous generation processors. Rendering and compiling programs, or movie encoding simply goes quicker than ever before.

The memory is programmed via the SPD chip to operate at 2000 MHz in a 3 x 2GB configured kit.  The memory timings tick in at 8-8-8-30 using a 2T Clock requiring a measly 1.65 Volts. This may not seem that important to you. But, it’s taken some detailed work to produce ICs that can handle these frequencies and so little voltage. Producing quality 2000 MHz ICs that meet or exceed JEDEC standards for Triple Channel memor can be expensive.

Each module offers two different programmed XMP profiles that your X58 motherboard of choice should support:

If the memory timings confuse you, that would be 8 (CL) – 8 (tRCD) – 8 (tRP/tRCP) – 30 (tRAS) and a Command Rate of 2T (CMD Rate) all found your computer’s BIOS. You never know when you may need to manually configure your memory timings, so it’s good to have the information readily available. 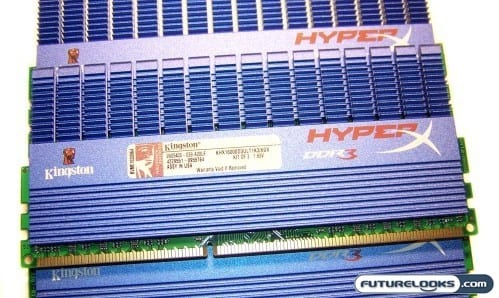 Kingston doesn’t waste much time on flashy packaging. They put their money in to the memory kit’s quality. Naturally, you can tell right away this is HyperX in all its powerful simplicity. The new HyperX Heat Spreaders can be found across the entire series. If the kit you’re researching doesn’t have a model number starting with KHX, it’s not HyperX.

Needless to say, the new spreaders are quite attractive. They’re thicker and look more aggressive than any previous generation HyperX memory. The blue has pretty much become a Kingston standard color for the series and won’t be changing any time soon. It’s very easy to spot the good stuff from the bad stuff in the display cases thanks to the blue spreaders.

Even though the spreaders appear rather girthy, they’re actually quite light being made from anodized aluminum. It’s essentially the same kind of aluminum used on performance based motherboard chipsets. If the aluminum is capable of cooling extremely hot chipsets, it will never have a problem with memory modules.