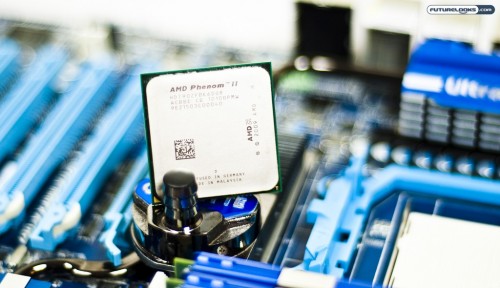 This week AMD unleashed a new processor to the world. While not quite to the fanfare as an over-hyped Apple product launch, their latest creations, the Phenom II X6 1090T 3.2GHz Black Edition and Phenom II X6 1055T 2.8GHz processors represent something that many AMD users have been looking forward to for a while now. Though not quite a match for the highly rated INTEL Core i7 980X 6-Core processors, AMD has created something extremely special for those of us with a regular salary but still have an insatiable need for performance. How about a 6-Core processor starting at $209.99 US?

AMD may not currently have a CPU to compete with INTEL’s latest and greatest, but they don’t have to have one. Instead of having a head to head race, they’ve stuck to what they’ve done best which is to provide the best features at the best possible price. Just recently we checked out their AMD 890GX platform which gives us an integrated graphics card that supports DirectX 10 and even has dual monitor support without having to buy another video card. The platform also gave us SATA 3.0, USB 3.0, DDR3 and support for every AM3 and AM2+ they have ever made (including the poster child of today’s review) all for as little as $129.99US based on a very capable MSI 890GXM-G65 motherboard.

AMD takes that same line of thinking with their new 6-core processors. While the INTEL Core i7 980X 6-core happily hangs out in top dog territory at over $1099 US, the AMD six shooter starts the party off at $209.99 US with their entry level 1055T 2.8GHz while enthusiasts will love the 1090T Black Edition 3.2GHz unit for $309.99 US. Since the 1090T is a Black Edition, that means that those brave enough to bump some voltages and do some overclocking may see even more value. Even novices can sit back and enjoy with the help of AMD’s own Overdrive software.

So to you and me, the Thuban represents a pretty phenomenal value in a true 6-core processor, aimed at competing with INTEL’s lower level Core i7 Quads-Cores and especially INTEL’s Core i5 line up. But we’re not going to tell you to jump ship from INTEL. Instead, we’re going to explore whether or not all you patiently waiting AMD users should make the jump to a six shooter or not.

Now before we get to looking at pretty graphs with numbers, let’s check out some of the new deal-maker features of the Phenom II X6 CPUs.

More Cores Without the Calories 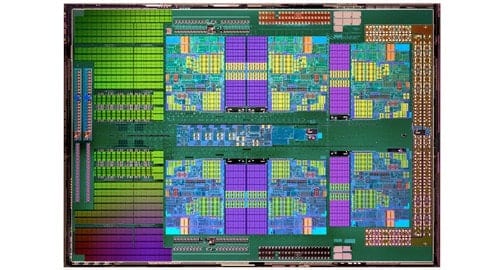 First off, AMD hasn’t reinvented the wheel. Fundamentally, what they’ve done is taken the proven Phenom II X4 platform and squeezed in an extra two cores. The two new cores have an extra 512K of L2 cache on-board which takes the total amount of cache on the chip to 9MBs vs the 8MBs of the Phenom II X4s. Secondly, they’ve done this without having to increase power consumption. In fact, both the Phenom II X4 965 and the new Phenom II X6 1090T have exactly the same TDP rating of 125Watts. So for those of you afraid of burning a hole in your motherboards, it’s all good. More cores. No power consumption penalty. 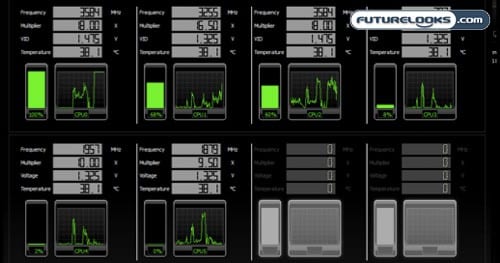 In the new X6, AMD has recognized that more cores aren’t always the way to go. Sometimes, a couple of really fast cores does the job better than a bunch of cores altogether. Taking a page out of INTEL’s Turbo Boost book, AMD has come up with their own version called Turbo CORE, or more accurately Turbo CORE(s). The “T” in the 1090T and 1055T stands for this.

In a nutshell, it allows the CPU to dynamically overclock up to three of its own cores to provide extra performance. In the case of the 1090T pictured in the screenshot, we see that a couple of the cores have hit 3.6GHz, one is at 3.2GHz, which is the stock CPU speed, and the rest of them are clocked way down. This is the Turbo CORE technology dynamically overclocking the core most under demand and under-clocking the ones that aren’t being utilized as much, all while keeping the specified 125W TDP. AMD also gives you the option, through AMDs Overdrive software, to boost down to only one CPU (to save power) or up to five CPUs (at the expense of rated TDP).

Amongst all the dynamic Turbo CORE’ing, the CPU still takes advantage of all power saving technologies to reduce power consumption during less aggressive usage scenarios. You can also shut all this off and overclock all the cores to oblivion if you wish too.

No. You Won’t Have to Buy A New Board.

One of AMD’s biggest value propositions is the fact that they realize consumers don’t want to buy a new board every year. Consumers do want the ability to upgrade their CPU with a simple drop in upgrade. This has been a hallmark of AMD technology and has been one of the things that they touted very proudly at their AMD Tech Tours over the years. AMD has promised that over 160+ motherboards will have BIOS updates to support the new Phenom II X6 CPUs. Unlike INTEL boards that seem to randomly change sockets, making your board obsolete for the next upgrade, that AM3 or AM2+ board that you have in your existing AMD rig will probably work just fine with this new chip.

Overall, the Phenom II X6 has quite a lot to offer existing AMD users and new users. The fact that you can get a six core workstation or high performance gaming machine going for under $1000 US is pretty appealing to people looking for a new system, while the ability to fetch a top of the line upgrade for as little as $209.99 US is also very appealing. It also makes spending $1000+ US for just a CPU somewhat silly. But wait…there’s one more thing…