Classic Combatants Are Back 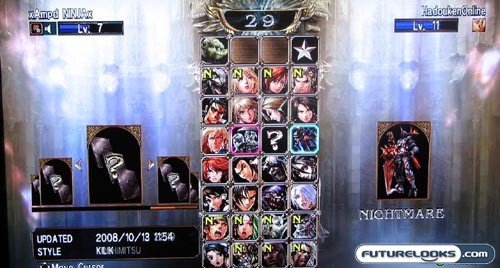 If you’re looking for a wide variety of characters, you’ve come to right place. Only about half of the 30 selectable fighters are available from the start, so you’ll need to either unlock them or earn gold to buy them in the Character Creation section of the game. Among the familiar faces are the spritely Talim, the pirate Cervantes, the monstrous Astaroth, and the outlandish Yoshimitsu.

Oh, and let’s not forget about the ever-menacing Nightmare, who looks more bad ass than ever. I don’t care if he’s slow and cumbersome; Nightmare is epic! 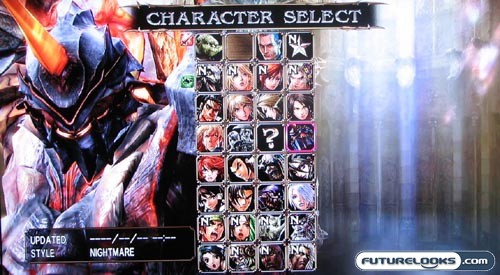 Joining them are a couple of new characters. Algol is a new boss character wielding the Soul Calibur and Soul Edge. Hilde is the daughter of the king of Wolfkrane, a fictional kingdom being attacked by Nightmare’s forces. She uses a sword and a spear.

Introducing the Power of the Force 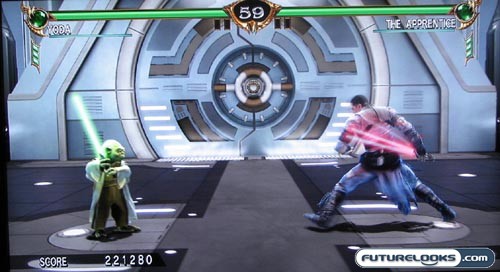 In Soul Calibur III, we saw exclusive characters offered to the versions sold on the Nintendo GameCube (Link from Zelda), Sony PlayStation 2 (Heihachi from Tekken), and Microsoft Xbox (Spawn). Namco has taken a similar approach with Soul Calibur IV, but the special characters come from the same universe. The one with the Force, midichlorians, and the Skywalker clan.

Included as a bonus character in the Xbox 360 version of this game is Yoda. The PlayStation 3 version gets Darth Vader. Both versions gain access to Darth Vader’s secret apprentice, as revealed in The Force Unleashed. For now, there is no way to pit Yoda against Darth Vader, though this may become a possibility with downloadable content (DLC). 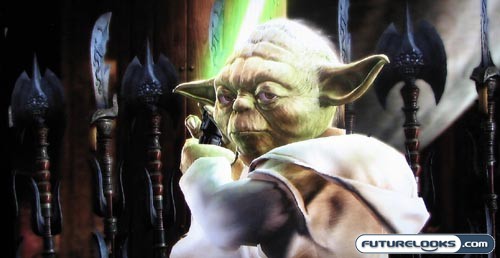 This was a very strange decision on the part of Namco and I feel that it is more of a gimmick than anything else. While the Apprentice (Donald Trump would fire him in a heartbeat) battles in a similar fashion as the rest of the Soul crew, Yoda is less than half the average height. As a result, any high and most mid-level attacks miss him altogether. It’s funny playing as him, but incredibly frustrating playing against the Jedi master. He’s very cheap.

Creating Your Own Warriors

A big part of gaming these days involves customization and personalization. While you can certainly customize the existing characters with new clothes and weapons (both of which affect their ratings and abilities), it could be more fun to make a new character from scratch. The character creation tool is powerful, but be prepared to spend some time with it.

You’d be surprised what you can do with the character creation tool. I was playing online (more on that in a moment) when I came across someone who made a giant cat. This kitty is deadly! 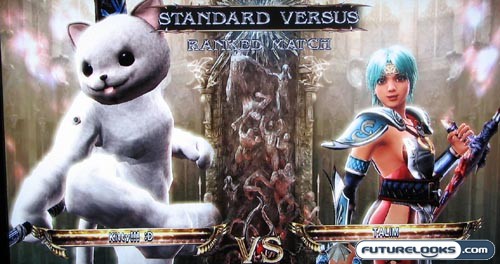 Essentially, the cat suit and head serve as armor. As the battle progressed, I was able to decapitate the cat and reveal an otherwise normal-looking girl. The busting of armor is quite satisfying and can lead to some rather sultry screenshots. Other players I encountered online mimicked Papa Smurf, Silver Samurai, and the protagonist from Assassin’s Creed.