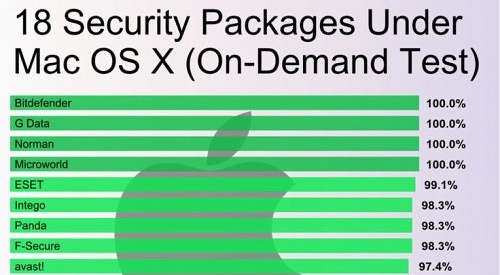 When in comes to Apple and their Macintosh (Mac) computers, how worried are you about your computer being infected with malware? A little? Not at all? Is there even malware targeted for Mac OS? Well, it seems that there is an increase in Mac OS malware and if you have not thought about it yet, it is probably about time to start thinking about it and how to prevent any intrusion.

Since April 2012, along with the Flashback Trojan, there have been over 700,000 attacks on Macintosh computers. Some people may just assume that Mac OS X itself is enough to help secure their systems against malicious attacks. Mac OS X (10.7/10.8) is not half bad when it comes to mail and browser downloads, but any external storage, such as USB flash drives and optical discs (CDs, DVDs), will still be a potential security issue. Having a third party security suite will help combat any issues that arise from there too.

In a recent study, 18 malware security package scanners were put to the test to see how well they would perform against the rigorous activities of searching for and eliminating Mac OS malware.

These 18 security packages were tested for speed of detection, efficiency of removal and how much of a load they would put on your system. After all, people would look for speed and high effectiveness, whilst not draining system resources, right?