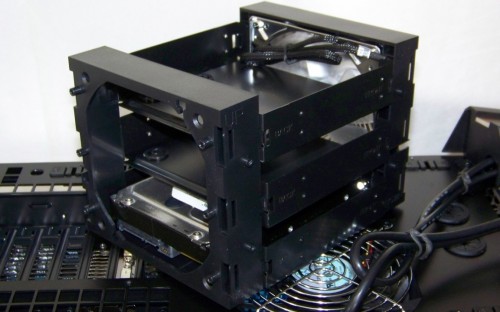 The Silverstone RV03 was mostly easy to work with in terms of mounting the system and setting the system up. Especially the hard drives that mount in the back of the motherboard tray. The chassis layout really helps clean things up during and after a build is completed. The removable drive cages were a little tricky to align when attaching the three trays to the fan caps that secure them. While it is tooless, the little tabs on the trays weren’t very durable under repeated use. Silverstone has since revised this due to user feedback and quickly sent replacements to us.

Originally, the case top (which is actually the IO area commonly the back of conventional cases) lost two legs after repeated use. Silverstone has since remedied this by revising the plastic lid making it a bit more flexible and resilient. The replacement top has fared well since the revision. 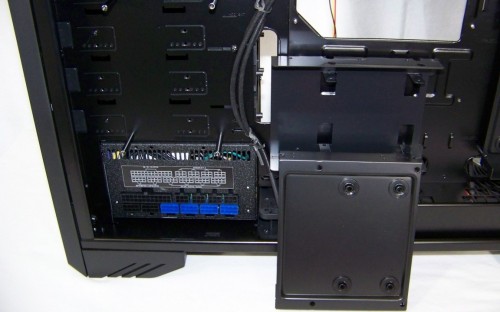 Installing the power supply is a little tricky. The lower hard drive tray has to be removed first. And, the Strider’s thicker, rough finish was a little too thick which resulted in both the case and PSU getting scratched up getting it inside. While this was my experience, Silverstone said they made slight chassis adjustments to all current stock very early in shipment. So by the time you get yours, this problem should not exist. This also didn’t affect any of the smoother power supplies stacked in the lab.

That said, the PSU bay houses any standard size PSU. If your system requires a larger 1000 watt or even 1200 watt PSU, all of the Strider series will fit as they share the same size chassis. However, other vendors’ larger wattage PSUs are longer and won’t fit. Make sure you double check that before ordering yours or just make it a combo with a Silverstone PSU to alleviate any concerns.

Since there isn’t a fan control built in to the case, I used my own Sentry LX to control the RPMs. I also used the 5 sensors attached with thermal tape to the side of the stock AMD CPU cooler, North Bridge heat sink, South Bridge heat sink, bare PCB spot closest to the GPU and hard drive center. This should give us any direct cooling benefits from the case. 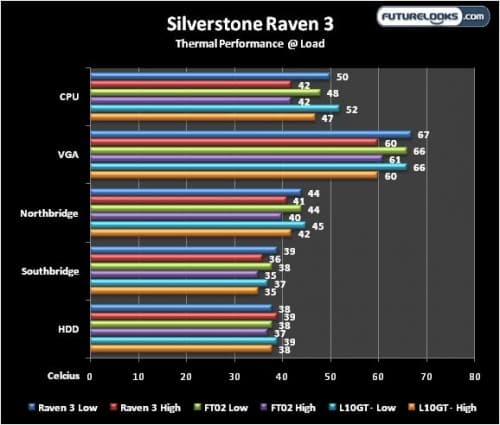 The RV03 and the previously reviewed FT02 are very close cousins in both features and design. It wasn’t a surprise to see both perform so closely in terms of temperatures. The hot air quickly escapes through the top as well as the bulk of any system noise.

The case fans do range from 19dB to 34dB when measured alone at low and high speeds. Keep in mind is that the test system is much louder and drowns out any case noise. However, the Fortress 2 is slightly quieter in spite of having three 180mm fans. But this drop in noise is most likely due to the thicker case panels of the FT02. The FT02 blocks about 10dB while the RV03 blocks almost 8dB of total system noise. Plus, the bulk of the noise does escape through the top unlike the Level 10 GT which escapes out the side and back.

Any good after-market silent CPU cooler and non-reference cooled video card installed within most any premium case including the Raven 3 can drop the noise up to 16dB in some cases. Especially when you compare them to the “worst case scenario” of parts we’ve planted in the RV03. 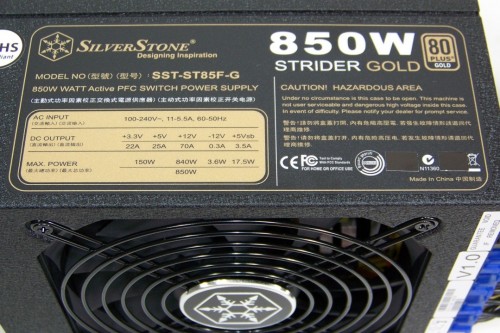 The ripple that the rails experience is in fact right at 3% throughout the spectrum. Each rail was also well above their specified voltage at all times. I couldn’t find any discrepancies with the trusty meter either. Temps reached 54C at the most but were otherwise lower during regular system use under regular system loads.

Maximum peak output of the Strider 850 is listed at 950 watts. Our PSU sample did not disappoint in that respect. It’s well outside it’s rated 850 watts yet still managed to maintain an 80Plus efficiency standard at the outer reaches of capacity. This is good news for those worried about a little extra head room for any hardcore build. The other good news is that we didn’t need to make you sit through 10 pages to figure this out. It’s good. Period.

Now that we’ve got all the testing out of the way, let’s summarize our thoughts on these two products and take it home!