A Look at the Base 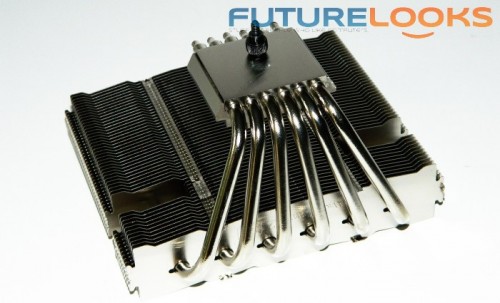 Notice that the upper fins are offset and not centered over the copper base. This can be a good thing or a bad thing depending on how it’s installed. Many smaller mini-ITX motherboards have the PCIE slots just a little too close to the CPU sockets. If this happens to you, just orient the cooler accordingly so you can access the slot.

I did notice that the base is not perfectly smooth. You can see the straight sanded surface lines which means there is some areas that will rely on the thermal paste to help transfer heat. For maximum cooling potential, it’s always best to ensure the base is at least very smooth, if not polished. The more surface contact area, the better the cooling overall.

Naturally, enthusiasts using smaller compact computer cases (typically used for Multimedia systems) want to know which current small cases the NT06-PRO can fit. When sizing up your choice, keep in mind that the NT06-PRO is only 82mm tall (3.25 inches). Silverstone already states compatibility with the SG05 through SG08 enclosures. Some other small HTPC cases include: Thermaltake (Armor and LanBox), InWin (Wavy, Buc 101, and FanQua), Bitfenix (Prodigy and Survivor), and Fractal-Design (Node 304 (reviewed here) and 605 (reviewed here)) just to name a few.

The next obstacle and common issue you’ll face is selecting a m-ITX board that doesn’t crowd the PCIE and CPU slot together. If you already have one, hopefully orientating the cooler in another direction will allow proper installation. Otherwise, just make sure the mini-ITX board you’re buying has a CPU socket beyond the half way point on the board for best results.

We recently unboxed the ASUS Z87i-Deluxe mITX board so you can use that as a frame of reference for what to look for. What will likely be an issue are any of GIGABYTE’s current mITX boards as the placement of the CPU socket is directly beside the PCIe slot. You can see what we mean in this article. Now on to testing!

The processor was left idle for an hour and then loaded for an hour at different intervals coinciding with using low and high fan speeds. Since the cooler includes a PWM temperature controlled fan, you can expect performance in between the two fan speeds. To keep in line with previous cooler tests, Arctic Silver 5 thermal paste was applied before mounting. 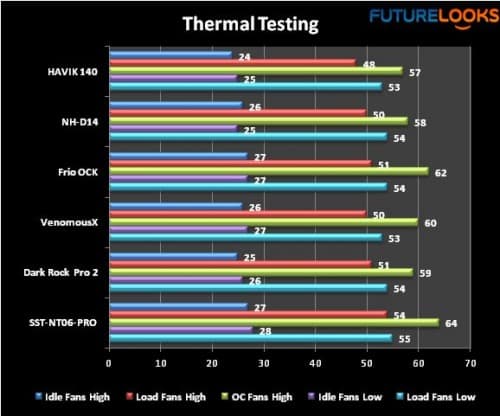 Overall, the NT06-PRO actually performs pretty well. I didn’t bother overclocking the processor with low fan speeds because it’s  just not worth the trade offs with this cooler. However, since it can manage a hex-core this well at stock speed, it won’t have any problem cooling a quad core unless you forget to apply thermal paste. Let’s look at noise levels next. 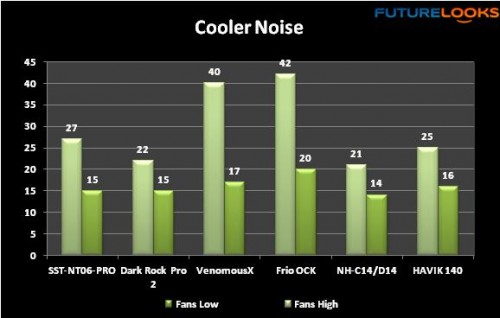 The fan doesn’t really get too loud. Granted, it’s 27dB on an open tech station but inside a case, it will be much less noticeable. Given the temp results from thermal testing, I’d even recommend manually setting the fan to automatic or even low so it remains very quiet throughout use. 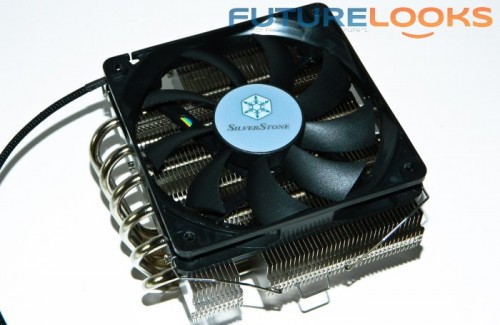 Installation was comparable to many other coolers tested but some configurations require more finesse. Additionally, the cooler’s light weight 20mm thick fan didn’t really ever offend the ears with its noise. Now that we know it can handle hex-cores admirably, it should have no problem with quad-core processors so you can enjoy the lower noise.

So how much will the Silverstone NT06-PRO low profile CPU cooler cost you? It retails for around $58.00 US from NewEgg and other retailers as well which is within reason for a higher performance, yet low profile, CPU cooler that can still remain silent. If you have a an HTPC in need of better cooling, this product comes Highly Recommended.