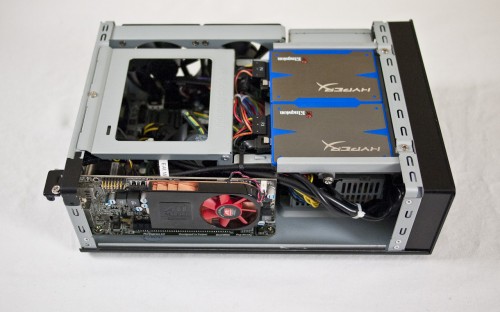 Our mini ITX demo system that first appeared at the NCIX Windows 8 Launch Event is quite the conversation piece. Especially once people realize that inside the understated ANTEC ISK300 mini ITX case lies a full desktop Core i7 3770K CPU, two Kingston HyperX 120GB SSDs, 16GBs of HyperX DDR3 LoVo memory, and a discrete AMD HD 5570 low profile GPU all plugged into a GIGABYTE Z77N-WiFi motherboard. The fact that all of this works together fantastically today, without exploding, tells us that mini ITX is ready to become a do it all platform. However, two things still plague small form factor systems in the form of noise and heat.

That’s why we’ve asked Noctua to send us over some of their premium cooling products to see if anything could be done about that and they responded. We recently received their brand new NH-L9i low profile CPU cooler for INTEL processors and two of their NF-R8 80mm PWM fans, to see if we could reduce the noise, the temperatures, and ideally, both at the same time. 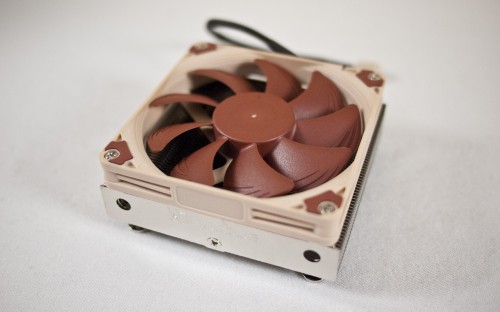 The Noctua NH-L9i and its AMD brother, the NH-L9a, are somewhat of a departure from the massive array of fins and fans that we’ve seen from this company in the past. But with DIY mini ITX market starting to grow, thanks to the availability of cool and capable components, the company has really put all they know into creating a well built premium cooling product. With the exception of the mounting mechanism, the AMD and INTEL version are identical in specs and performance and both retail for around $49.99 US. They also back it up with a crazy 6 year warranty.

The cooler features a special NF-A9x14 PWM premium fan that is no more than 14mm in height, attached on top of a beautiful nickle plated array of aluminum fins, attached with two heatpipes, that are mated to a nickle plated copper base. The heatsink itself is a mere 23mm in height and when combined with the 14mm height fan, making it just a tad over 37mm once you take the mounting mechanism into account. The fan itself reaches an RPM of 2500 on its own, or you can limit it with the included low noise adapter down to 1800RPM.

Because the heatsink is in strict compliance with INTEL standards, it leaves enough room on mini ITX boards to mount your PCIe graphics cards and your RAM. It’s rated for 65watt TDP CPUs but can take higher wattage CPUs with caution. While our Core i7 3770K is a 77 watt TPD part, there is potential to undervolt to meet that standard. The stock Intel cooler we’ve been using is pretty meagre so I can’t see how this Noctua couldn’t handle the load. 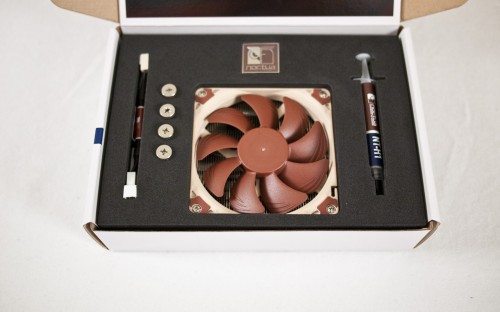 Accessories in the box include a full tube of their excellent NT-H1 thermal compound, four mounting screws for mounting the heatsink to the board, a low noise adapter for even quieter operation, and a Noctua case badge that does not disappoint in quality either. Also in the box are four screws that allow you to mount a higher speed 92mm fan with a height of 25mm, in case you want better performance and are willing to live with higher noise. 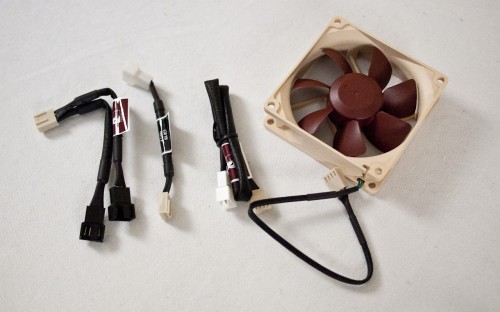 Noctua’s original 80mm fans are now PWM which means that they are now automatically controlled up to the 1800RPMs that they are rated for. Combined with their SSO bearing for long and quiet operation and their special PWM IC that reacts quickly and draws as little power as possible, it seems perfectly suited at replacing the two fans (one ANTEC Tri-Cool 80mm and one Glacial Tech 80mm that was in a parts bin) and potentially improving on both noise levels and maybe even temperatures. But I’ll take noise levels first because the two stock fans create quite the ruckus.

You can mount the fans with the included rubberized fan mounts or the more conventional screw mounts. We’ll be opting for the screw method because there simply isn’t enough space in this case to make the rubber mounts work. As far as installation goes, Noctua includes everything you need in the box including a Y-Adapter for mounting two fans to single fan header on the board. This is great because many mini ITX boards have very few of those. You also get an extension cable and if you need even lower noise, a low noise adapter is included in the box and will limit top end RPMs to 1300.

Retail price of the NF-R8 80mm PWM fans hits around the $19.99 US price range. They are definitely not cheap, but they are one of few quality 80mm fans still left on the market. Did I mention the 6 year warranty? 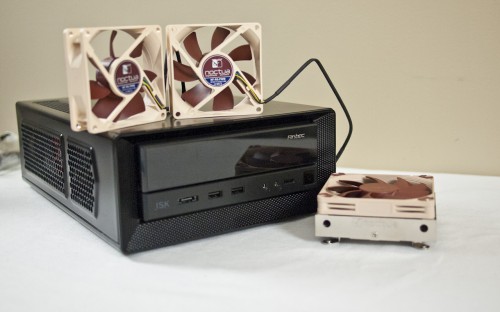 As mentioned earlier, we are seeking a way to reduce either the temperatures, the noise levels, or both, in our mini ITX demo system. While we have been mostly impressed with the way the system handles itself thermally, the noise produced by the system is extremely annoying. It’s not just the volume, it’s also the tone. We’re hoping that with the Noctual NF-R8 80mm PWM fans and the NH-L9i together, we can attempt to achieve one or the other, or both, but we’ll gladly take a couple degree hit if we can just get this system to shut up.

We’re going to start by replacing just the fans first, then we’ll introduce the new cooler afterwards. Along the way, we’ll do before and after shots using the excellent HWMonitor software and take stock of GPU, CPU, and system temperatures. We’ll also be taking noise readings at both idle and load. Idle snapshots will be taken with the system booted into the Windows 8 desktop after 30 minutes, while loaded scenarios will be produced using Unigine Heaven DX11 benchmark running for an additional 30 minutes. This will give us a min and max of expected temperatures to expect as well as the noise levels as measured by a meter held six inches away from the ventilation area closes to the fans.

Next we’ll cover off the installation issues/notes, and then reveal the results of each upgrade into the very tight confines of ANTEC’s ISK300 chassis.