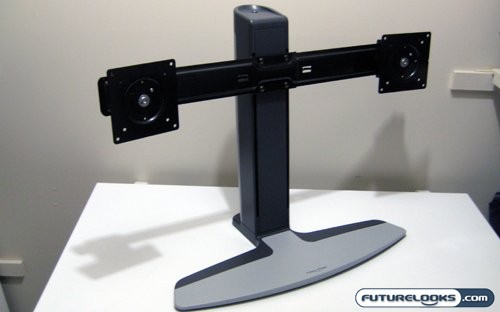 When configuring a dual monitor setup, it can be hard to get the panels mounted in a fashion that best fits the user. This is especially true if you are using two different makes or models of LCD panel, or if your LCD panels of choice lack any decently adjustable stands. Rather than suffering from the ergonomic detriments and inconvenience of such a setup, you should look at a monitor stand that replaces what is currently connected to your LCDs. Ergotron is a well known manufacturer of such products, and they sent us their latest multi-monitor stand to take a look at.

The Ergotron Neo-Flex Dual LCD Lift Stand is a simple dual monitor mount that provides full adjustability for two monitors of your choosing. The stand is billed as Ergotron’s most affordable stand yet still sports features such as simultaneous height adjustment (up to 5 inches), rotation of both panels from landscape to portrait mode, 360° rotatable base, and an relatively small footprint. It’s also quite a heavy duty piece of kit, and can support up to two 22″ LCD panels as long as they support VESA 75mm or 100mm mounts.

As for pricing, Ergotron has the Neo-Flex dual LCD stand listed on their web site for an MSRP of $149.99 USD.

At that bargain price the stand doesn’t come pre-assembled so I apologize for getting your hopes up with the introductory picture. Instead you get a whole host of parts and screws, and some good instructions on how to put it together. That’s what we’re going to look at first, followed by an assessment of how this panel does with two 22″ LCDs bolted to it. 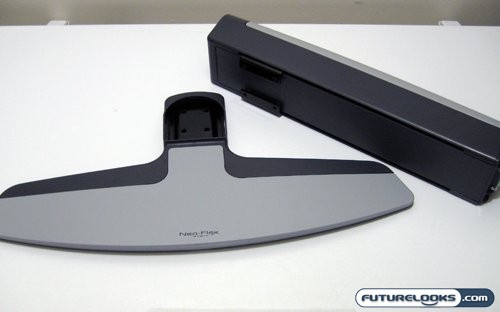 The first major assembly that makes up the Ergotron Neo-Flex Dual LCD Lift Stand is the base and neck. These two components contain all the hardware and mechanisms necessary to facilitate the amount of adjustments this stand is capable of. Both of these components I found were deceptively heavy, and felt quite sturdy. This means the hardware used is made of heavy duty materials, and the stand will easily counter-balance itself to prevent easy tipping. 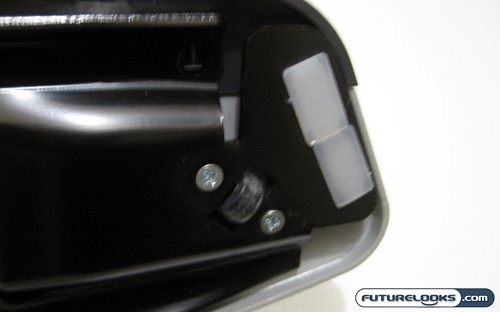 The bottom of the base is metal, and the whole rig sits on an interesting mechanism for rotation. Most LCD panels that I’ve reviewed feature a ring in their base that rotates like a Lazy Susan. The size of this stand precludes such a device. Rather, the Neo-Flex rotates on a single pivot point using two angled plastic rollers on the “wings” of the base. This makes it easy to swing your monitors around. Just watch your head, as two 22″ panels need a lot of swing room. 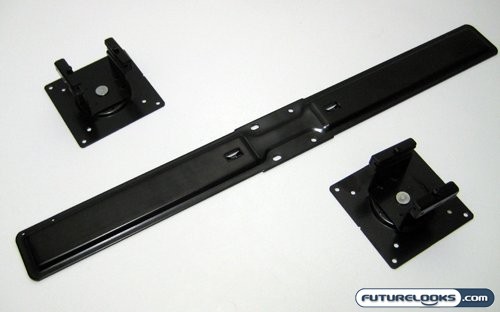 Next up in this cavalcade of components is the actual monitor arm and mounts. These are pretty self explanatory; the two mounts attach the monitors to the arm and the arm attaches to the base. Both the mounts have a slick sleeve inside them, to allow you to easily slide the monitors up and down the arm. They also rotate a full 360°. The arm itself has a couple of loops that, when coupled with some zap straps, easily facilitates cable management.