There was a time when just about every CPU cooler had a flat, or horizontal design. Of course, there were no heat pipes but they fit in every type of computer case which included micro-ATX and mini-ITX cases. Nowadays, heat pipes are the norm especially if a manufacturer is serious about cooling off high performance processors. This also meant limited after-market cooling solutions for the aforementioned smaller enclosures. Previously, we’ve tested products from Noctua including their NH-C14 and NH-L9i which are both solutions for cooling in tighter spaces. But the latter didn’t have heat pipes and the former is still quite large by design. That’s why we wanted to check out Silverstone’s solution, the NT06-PRO Nitrogen series CPU cooler.

The Nitrogen NT06-PRO is designed to fit thinner, more compact enclosures. The cooler has a slightly lower profile and features a fan that can be mounted on the top or bottom of the horizontal fins. We thermal tested the CPU cooler on an Intel Core i7-980X as well as tested how it works with various enclosures. More on that shortly.

Heat pipes do most of the cooling in any cooler design and the NT06-PRO has six of them running from the copper base up to the aluminum fins. Two wires fasten the 120mm PWM temperature controlled fan. You can control it automatically or manually through your motherboard’s BIOS by simply plugging it in the 4pin CPU header on the board. 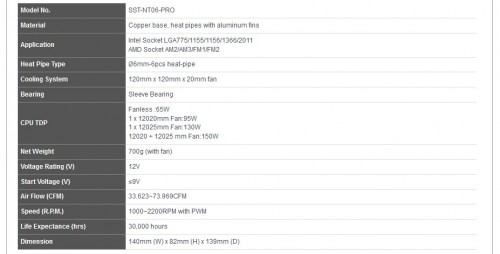 The thinner 20mm 120mm fan fits the top or bottom of the heat sink head. Users can also add a second fan if it helps move a bit more air to help cooling potential. The cooler also has the potential to run fanless for lower 65 Watt processors. Keep in mind that chassis airflow should be decent for preservation of the CPU. Otherwise, the 1000-2000RPM fan moves a decent 33-74 CFM. Not too bad for a 20mm fan.

One technical aspect of the cooler is that it weighs only 700 grams with the fan. The Noctua NH-C14 weighs as much as 1000 grams with both of its fans installed. System integrators seem to trust lighter weight CPU cooler a bit more than the heavier due to shipping damage risks.

In terms of cost, the Silverstone NT06-PRO retails for around $58.00 US from NewEgg and other retailers as well so it definitely isn’t inexpensive. But it’s well inline with other specialized coolers we’ve tested.

Inside an environmental friendly box are the heat sink, detached fan, manual, a baggy with universal back plate, CPU socket specific mounting bolts for the back plate, top plates for securing the CPU cooler, and four metal wires for mounting the 20mm x 120mm fan and one optional fan. Keep in mind the wires are meant to only work with 20mm thick fans. However, a little patience in cable management will accommodate a 25mm thick fan if needed.

Closer Look at the Silverstone NT06-PRO 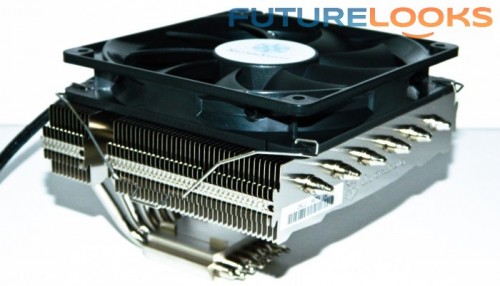 The Silverstone NT06-PRO is a professionally machined and assembled heat sink. The fins are quite sturdy and perfectly straight. You can see that the fins all connect at the seams without any protruding, or crooked edges. 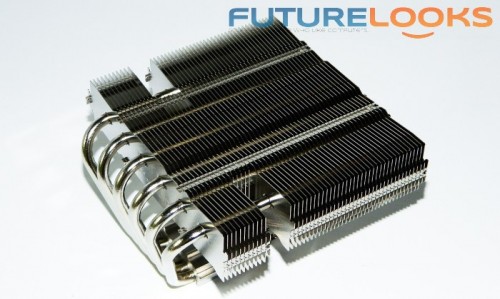 Two spaces are provided over each side of the fins to allow users to access the mounting hardware with any tools. The heat pipes terminate at the base and top professionally without any dirty joint molds. Overall the quality is very high end.

Let’s keep going and have a look at the quality of the machined base then move on to testing!