Futurelooks stops by the Thermaltake/Tt eSPORTS suite at CES 2012 to grab a drink and see what they have new for gamers and enthusiasts. The breadth and depth of the product lines have really grown and for both brands. For starters, Tt eSPORTS has expanded out to a whole new line of headphones that address the needs of audio enthusiasts to gamers, and they’ve also worked extensively with their top gamers to create two new signature mice. Thermaltake continues along with the introduction of a new Level 10 case for more price sensitive customers and a cooler that they think will go head to head with proven performers like the Noctua NH-D14. Check it out above in 1080p HD or directly on YouTube.

The Tt eSPORTS “Chao” Series of Headphones and Headset Series 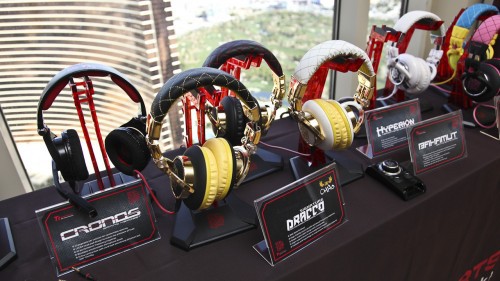 TT eSPORTS new headset series is geared towards a more fashion forward crowd. With bold colors and styling, the new Chao series (not to be confused with “Peter Chao” from YouTube) will definitely please those looking for something that will make you stand out in a crowd. The line up is divided into three which includes a regular “Dracco” line that gives good sound quality and a wide range of colors. There is also a signature line up that is geared towards those looking for something with higher quality audio and a bit more “bling” with the gold accents. The higher end “signature” series will go for $99 US and the regular line will go for $69 US.

Gamers are also taken care of with a new Dracco gaming headset that will retail for $79 US and contains a microphone similar to the one used on the original “Shock” series. The sound quality will be similar to the regular Dracco line. They also showed off a new Chronos headset that is still in prototype and will offer more premium materials for high performance gaming.

Tt eSPORTS went to their top two RTS gamers to design two distinctly different mice for different styles of play. First, they went to their top team player “Softball” and created the new Theron laser mouse which has an APM (Actions Per Minute) function that actually changes the lighting intensity depending on how high your APM is. It includes a 6500DPI sensor and also features weight management. The mouse has good ergonomics and is easy to handle.

The other mouse was created in conjunction with their top team player “White Ra” and is a bit different because it uses an optical sensor. Called the “Saphira” the mouse features an optical sensor instead of the typical laser sensor. So if you prefer the performance of an optical sensor over laser, then you have a choice between the two depending on your playing style or the games you prefer to play. Both of them will retail for $69.99 US and they should both be on the market by March 2012.

The Level 10 was a very expensive case. So the company retooled and brought out the Level 10 GT. But what if the $300 ballpark is still too much for the Level 10 look? Thermaltake has an answer and they call it the Level 10 GTS. It has all the styling cues of the Level 10 series and still has a headphone hook and hot swap drive bays, but in a slightly smaller mid-tower size. There’s room for lots of fans, you even get USB 3.0 ports, and there’s no denying it is from the same family of cases. You should be able to pick it up for around $129 US but they are working had to hit that $100 sweet spot. You’ll get a choice of black or white when it comes out. 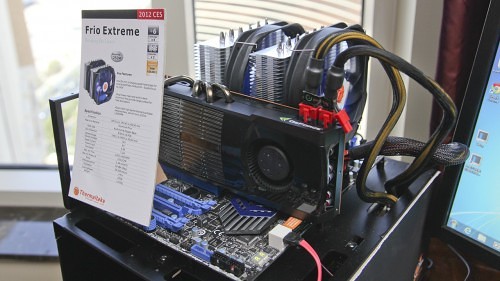 Thermaltake also unveiled new colors for their Frio Series of coolers. They are bringing everything in white too and the pricing will be the same as the originals. But the really interesting cooler was the new Frio Extreme. They claim it is one of the highest performance coolers on the market with support for up to three fans and up to 250W of heat dissipation. They are aiming at a price of below $89 US and they have their sights set on performance leaders like Noctua’s NH-D14, but without the brown/beige color that turns a few stomachs.