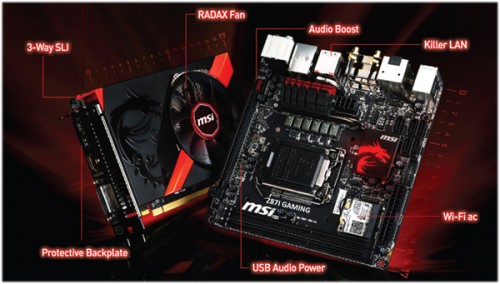 When it comes to performance computing, sometimes small size means compromise. Today MSI decided to put a stop to that nonsense with the release of the Z87I GAMING AC motherboard and GTX 760 GAMING ITX graphics card. While small, these two new components are not lacking on the spec sheets. With features such as Killer LAN, 802.11ac and Audio Boost the Z87I GAMING is ready to support you wherever you go knowing you’ll be able to connect to networks with the best speeds for gaming.

The GTX 760 GAMING ITX GPU features MSI’s new RADAX fan which is a true Hybrid design fan that boosts lower noise and up to 30°C lower temperatures compared to any other card in its class. Basically you’ll have the great foundation for a great little LAN warrior, or even a nice home-built SteamBox. It would work great inside one of the BitFenix Prodigy cases that we’ve had a lot of fun building.

For all the spec waggling, MSI hasn’t just focused on raw power. With small size comes the challenge of cooling and noise. First they reduced audio noise on the motherboard with Audio Boost, splitting off the audio signal from other components to avoid electrical noise and provide clearer audio, and focusing on using the best components available for the audio circuit. They then went and put in HDMI 1.4 with full 4K UHD ultra high resolution support.

On the video card side MSI had to rethink cooling, and came up with the aforementioned MSI RADAX fan. This true Hybrid Radial/Axial fan combines the best of both cooling technologies, reducing temperatures and noise at the same time. This is all in a video card that still sports the same features found in other MSI GAMING series graphics cards. It’s almost as small as the GTX 650 Ti, but obviously much more powerful.

Pricing details haven’t been released yet, but we look forward to taking a look at these new components in the very near future. MSI’s announcement gives us a great option to look to for our next big (little) LAN system build. The full press release can be checked out below.

The long awaited products for gamers who prefer small-sized gaming machines are finally here! Today, world-renowned hardware manufacturer MSI officially announced the Z87I GAMING AC motherboard and GTX 760 GAMING ITX graphics card offering many gaming features in the small mini-ITX form factor. With features such as Killer LAN, 802.11ac and Audio Boost the Z87I GAMING is ready to support you wherever you go knowing you’ll be able to connect to networks with the best speeds for gaming. The GTX 760 GAMING ITX features MSI’s new RADAX fan which is a true Hybrid design fan that boosts lower noise and up to 30°C lower temperatures compared to any other card in its class. Both motherboard and graphics card offer excellent chassis and component compatibility and are the optimal combination for your living room PC or LAN Party gaming rig.

MSI’s Z87I GAMING AC has inherited the outstanding genes of MSI’s GAMING motherboards, which have won more awards than any other gaming motherboard on the market. It is equipped with the Killer E2205 Ethernet which offers the fastest low latency to game lag free. Additionally, MSI’s Audio Boost comes with the highest grade built-in amplifier and audio capacitors, giving gamers a stunning in-game audio experience. The audio circuit board signal is split from other components to avoid lower noise and provide purer audio quality. For those gamers who are using external USB audio devices, MSI’s USB Audio Power provides more stable power and a higher quality signal resulting in a better audio experience. The included Intel Wi-Fi AC solution provides a maximum transfer speed of 867Mbps, and supports Intel’s exclusive wireless video transmission Wi-Di technology! There is a built-in HDMI 1.4 video output that supports 4K UHD ultra high resolution. These gaming features will enhance the gaming experience and this all packet into a very small mini-ITX form factor which will give gamers the edge on the battlefield.

When we created the new GTX 760 GAMING ITX Graphics card we realized that with a 30% shorter size (only 17 centimeters!) the challenge was to still provide the great and silent cooling that has been synonymous with other MSI GAMING graphics cards. We found the solution in the new MSI RADAX fan, a true Hybrid Radial/Axial fan that combines the best of both worlds and reduces temperatures up to 30%. Consisting of elements similar to the MSI Propeller Blade fan, combined with a traditional blower fan we can increase airflow, exhaust hot air through the rear of the card and keep temperatures and noise better than any other product in its class and form factor. The MSI GTX 760 GAMING ITX also inherits all the features of the MSI GAMING series graphics cards: the exclusive one button overclocking Gaming App, Predator video capturing and more importantly, Military Class 4 components for excellent stability and lifetime. The MSI GTX 760 GAMING ITX, combined with the MSI Z87I GAMING provides a unique, rich Gaming experience optimized for today’s online and social gaming world while offering amazing thermal and acoustic performance in the mini-ITX form factor.