If I wasn’t listening for it, I probably wouldn’t have noticed that the Momentus 7200.4 created just a little more vibration through the aluminum chassis of my MacBook Pro. I can’t say that it was noisier than the Hitachi 5400RPM drive that I just pulled out of the machine. I did notice though that after periods of time where the drive is sitting idle, it’ll make an audible clicking to get itself back into the action. This is likely the ramp load feature that parks the head off the platter when not in use, springing back to life. Other than that, it appears that the “Quiet Step Technology” is working.

The other thing about 7200RPM drives is the fact that they do produce a bit more heat than slower platters. Since the MacBook Pro has an aluminum shell, it should be easy to notice a significant temperature variance. Sadly, there really wasn’t one… or rather … gladly. The bottom of the notebook directly beneath the drive only registered 37.5C even after being on for a couple hours.

My subjective impressions revealed that the drive boots faster and just seems overall more responsive. Let’s see what the benchmarks say. We ran the QuickBench Extended test which measures read and write performance from a sample of files from 20MB – 100MB. The test was run five times. Let’s start with the original Hitachi 5K250 drive… 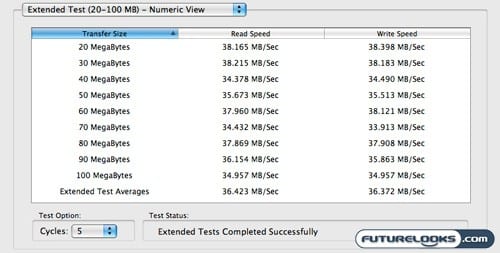 The Hitachi 5K250 isn’t a speed demon that’s for sure. As a SATA150 drive, it has a handicap of 150MB/s. But then again, the MacBook Pro matches that with a SATA150 controller. However, we are nowhere near the limit putting down an average read speed of 36.423 MB/s and a write speed of 36.372 MB/s. It’s really only barely faster than a USB Hard Drive. I’m sure that the stately speed does contribute to the nearly 4 hr battery life of the MacBook Pro. Let’s check out the Seagate. 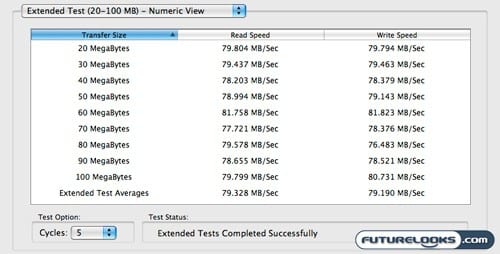 This is MOST impressive! The Seagate Momentus 7200.4 totally annihilates the Hitachi with a read speed of 79.328 MB/s and a write speed of 79.190 MB/s. I knew I wasn’t hallucinating when I noticed how much faster this drive performed during boot up and during regular operations.

Seagate has done a really great job with the Momentus when it comes to power consumption vs performance. While the Hitachi spins up at 5 Watts, idles at 2 Watts and benches at 3 watts, the much faster Seagate spins up at 6 Watts, idles at between 2 – 3 Watts (it jumps around) and benches at 4 watts. Considering the huge performance gain, I will gladly give up the 20 – 25 minutes of battery life that I lost. It’s rather insignificant considering how much faster the system performs.

Hard drives are the last bottleneck in portable device performance and while Solid State Drives are addressing that fairly quickly, their cost and their relatively small sizes make it impractical for folks that have their whole lives on their notebooks. Storage capacity still remains king and if you’re toting around your music collection, videos and pictures, the priorities for your storage solutions are pretty clear: size matters.

In this case of the Momentus 7200.4 500GB Notebook Hard Drive, we’re given very few downsides to the upsides. For starters, the drive is still remarkably quiet except for the occasional click as the head moves back to the platter from park. The drive also performs amazingly, completely destroying the stock drive that came in my Macbook Pro. Did I mention that it was also double the size?

The only downside is that you lose a bit of battery life (20 – 25 min), but it’s an amount I can live with for the performance it provides. It’s just so much more responsive with it than without it. I think Mr. Dinosaur USB Drive above reflects my feelings about this drive the best: I love it and want to give it a big hug!