There are a total of five buttons on the Sansa slotMusic. Along the longest side are the rubberized buttons for controlling your track play. There are the buttons for forward and back, and then there is the play/pause button in the center. This play/pause button, when held, also acts as the power button. Next to the forward button is a small LED indicator light.

On the short edge next to the 3.5mm headphone jack are two more rubberized buttons for controlling the volume. As there is no external display on this player, the only way you can know the current track or volume level is to listen to the song. This is the same scenario that you’d get with something like the iPod shuffle.

On the other end is the exposed slot for the microSD memory card. It is spring-loaded and will accept non-slotMusic microSD cards as well, though there does not appear to be any support for microSDHC cards. 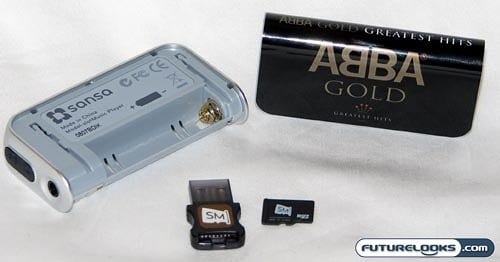 The entire shell easily slides off to reveal the internal guts of the Sansa slotMusic player. It is here that you install the provided AAA battery. This gives off quite the raw appearance when open, but it helps to provide a cleaner look when the protective shell is reinstalled.

You will also notice that there is no way to connect the slotMusic player directly to your computer nor is there a jack for inserting a wall charger. This is said to add to the player’s simplicity, but it does take us back a couple of steps in terms of the level of technology involved.

The Purple Haze of New Tunes 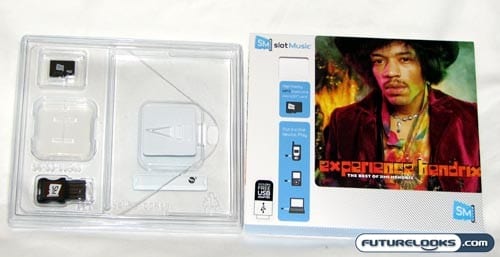 Getting tired of listening to ABBA? Just as you would go to the store to buy a CD, you can go to a store to buy a slotMusic memory card. The example shown here is an album with the best of Jimi Hendrix. This kind of transaction appeals to people who prefer physical media over a digital download, but it is far from being the greenest solution.

The only point of real interest is the fingernail-sized microSD card in the corner. The rest of the plastic packaging, meant to provide the same physical dimensions as a CD, is ultimately useless. You also get an extra USB microSD card reader in the package.

On the bright side, all the MP3 files contained on the memory card are DRM-free, so you can use them in non-slotMusic products as well. Further still, each memory card (about $15) is 1GB, so any extra room beyond the preinstalled album can be used for storing more tunes or documents as well. If you’re going to buy a microSD card anyway, getting the “free” music is a nice bonus, even if you don’t have a slotMusic player. The microSD card can be used with a BlackBerry and other smartphones, for example.

Keeping Organized with the Wallet 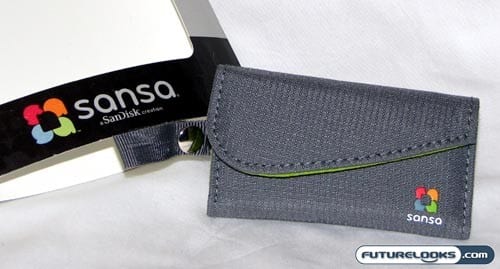 To accompany your ABBA or Hendrix shelled Sansa Slot Player, the Sansa Card Wallet comes in handy for storing your microSD albums while on the go. This wallet is separate from the player itself, but it provides room for up to six more albums. When you purchase a slotMusic card with music, it comes with a small memory card holder (about the same size as a standard SD card case) that features the album art.

By placing your memory cards into these slightly larger cases, you not only gain a little extra protection (and lessen the possibility of losing them), but you can more easily identify which card contains what tunes.