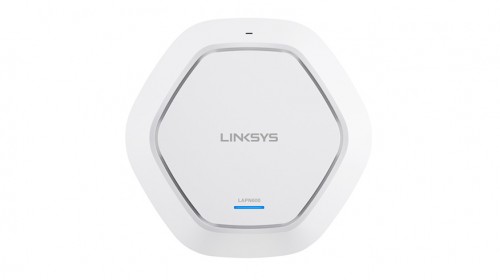 In this the second decade of the 21st century, the need for businesses to have full and reliable internet access in undeniable. But we’re not talking computers, are we? More and more businesses are facing a rapid increase of connected notebooks, smartphones and tablets and an increase in use of multimedia and video on their networks. This much traffic needs robust backend support, and Linksys thinks they just the solution for that. The company is jumping back into the business world with two new wireless access points.

The Linksys Wireless-N LAPN300 and LAPN600 access points are what the venerable company is offering up. They sport very similar feature sets, with the former being single band (2.4GHz) and the latter being dual band (2.4GHz and 5GHz). Both units can function as access points or range extenders, and support such enterprise level goodies as advanced security with RADIUS support and PoE. They also tie in perfectly to your GigE network, and are future proofed with IPv6 support.

Pricing for the LAPN300 and LAPN600 access points are $199.99 USD and $299.99 USD respectively, and they should be available now from your local corporate sales rep. For more details check out the press release below.

Irvine, CA – February 18, 2014 – Linksys® today announced the expansion of its business networking line-up with the first of its business grade wireless access points. The two new Linksys Wireless-N access points are ideal for businesses to deploy a fast, highly secure and reliable wireless network or to upgrade an existing wireless infrastructure.  The new access points can be deployed as an access point or range extender.  Many businesses are facing a rapid increase of connected notebooks, smartphones and tablets and an increase in use of multimedia and video on their networks. The Linksys Business Wireless-N Access Points use the widely adopted 802.11n wireless technology to provide a fast and highly reliable wireless network and support advanced features such as Power over Ethernet for flexible placement, plus Rogue AP Detection and 802.11X supplicant for enhanced security.

“Wi-Fi is far more crucial to businesses these days – and is being deployed for many reasons. In office environments wireless enables employees to work anywhere, have fast and free access to the web on mobile devices and enables new experiences such as voice over IP and video conferencing. At the same time hotels, retail stores and restaurants use Wi-Fi for hospitality purposes and in production, and in logistics facilities it is used to connect handheld devices for real-time inventory control,” said Steven Lin, director of product management for Linksys Business. “All businesses have one thing in common though; they all want their business processes to run smoothly, which requires reliable solutions like we are offering with Linksys Business.”

The Linksys Wireless-N Access Points can be deployed as a Wi-Fi access point or range extender to connect notebooks, smartphones, tablets, and other Wi-Fi devices to the network and the Internet.

The Linksys Business Wireless-N Access Points are planned to roll out in February through major distributors. SMBs and resellers can find a participating distributor at our website:

The Linksys brand has pioneered wireless connectivity since its inception in 1988 with its leading innovation and engineering strategies, and best-in-class technology, design, and customer service.  Linksys enables a connected lifestyle for people at home, at work and on the move, and with its award-winning products, simplifies home control, entertainment, security and Internet access through innovative features and a growing application and partner ecosystem. For more information, visit www.linksys.com, like us on Facebook, follow us on Twitter or watch us on YouTube.