I said it when I first saw it at CES and I'll say it again now that I have it in my hands: the Samsung Series 9 is gorgeous. It doesn't do the "teardrop" profile that you find on the MacBook Air, but it is very thin throughout. The brushed metal is cool to the touch and the little chrome edging adds a nice dash of class. 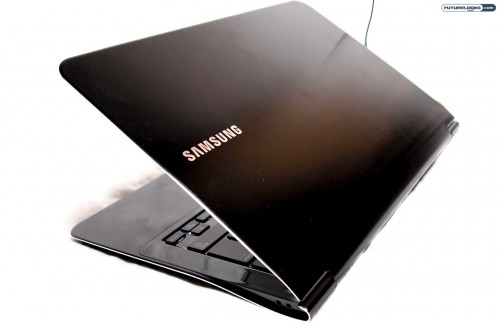 The build quality, as far as I can tell, is top-notch. It doesn't do the unibody construction like Apple, nor is it super rugged like the Getac V100, but you can tell that you are not getting an inferior product when you hold the Samsung Series 9. It's a premium product with a premium finish and a premium price to match.

Because it is black and because of the finish they chose, the surface does become a fingerprint magnet though. You don't notice this quite as much with the silver aluminium finish of Apple's offerings, so it is important that you carry a cleaning cloth around with you. This is no different than so many smartphones and tablets that we see on the market today. 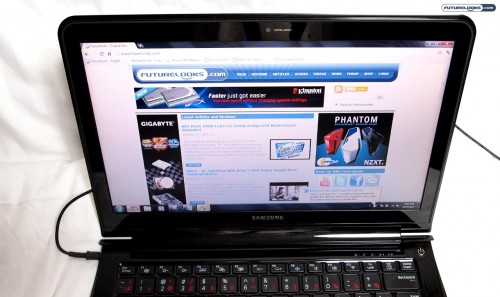 One of my biggest gripes about the vast majority of consumer-oriented laptops these days is the use of a glossy screen. Yes, I completely understand that the glossy displays provide for more vibrant colors and sharper contrast, but they are also virtually unusable under any kind of direct sunlight. If you feel the same way, you'll like Samsung.

That's because they've opted for a matte display on the Series 9. This is much more friendly under various lighting conditions, both dim and bright. It's also generally easier on the eyes. The LED backlighting helps in this regard too.

As far as viewing angles, the screen is perfectly usable under fairly wide angles both vertically and horizontally, though extreme horizontal angles result in weird color effects. You get a reddish hue across the entire display. Something that we're not sure a color calibration would fix. But given the personal nature of a notebook PC, though, this isn't really a cause for concern. Just center yourself on the laptop, as your normally would, and it's all good. Very good.

Let's start with the keyboard. You get the same kind of chiclet or "island" keyboard that you've seen before, which is generally a good thing. The keys have a good amount of travel and separation, making typing a fairly comfortable experience. 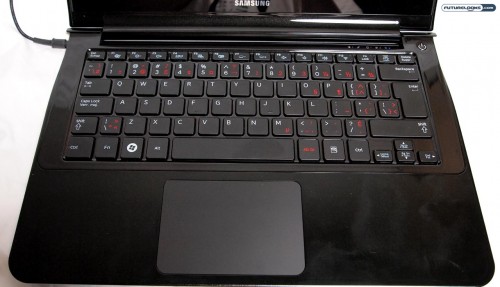 That said, I have at least two negatives to say about this keyboard. While it addresses the too-small right shift key on the Samsung N220 netbook and others like it, the Series 9 adds in a too-small left shift key. I keep hitting the extra "" key every time I want to hit shift. It's annoying. Just give me the "wide" shift key on both sides. Please.

Second, the large trackpad might be a little too sensitive. I'm a bit of a "lazy" typist, so I tend to rest my wrists a little too much. This means that I keep doing things on the trackpad with the pad of my palms (beneath my thumb) accidentally. Maybe that's my fault, but it's still a concern.

To this end, the trackpad is also a double-edged sword. You see, Samsung got rid of the traditional trackpad buttons and just made one big pad. It clicks in, if you want to do that, but a "tap" also registers as a click. It's also notable that the left side registers as a left-click and the right half registers as a right-click. This sounds like a good idea and it mostly is, but I did find that I had far too many unintentional "taps" than I would have liked. These quirks will require tuning with the software to work out, but you risk desensitizing it too much.

Aside from that, I appreciate the multi-touch gestures and the overall feel of the large pad. 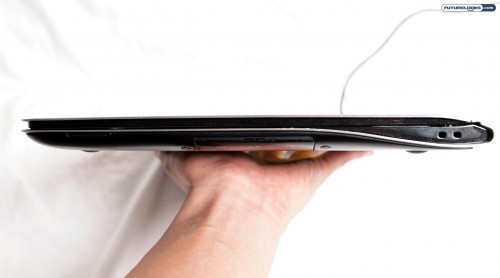 To see how long that six-cell battery can last on this machine, I put it through the usual battery rundown that I do with every notebook and netbook that I review.

After allowing the laptop to complete its bootup process, I open up a 720p HD video (about an hour in length) and allow it to play at full-screen. The power cable is then removed and the video is left to loop infinitely. During this time, the Wi-Fi radio is left on but is inactive. The notebook is also set to full brightness and full volume, as well as going to hibernate when the battery is at less than 5% capacity.

Based on these circumstances, the Samsung Series 9 lasted three hours and 20 minutes before putting itself to sleep. That's adequate for most people and it will presumably last longer with lower brightness, lower volume, and less heavy lifting than playing an HD video full screen.