CES 2010 revealed a lot of new innovations for PC enthusiasts. MSI Computer was at the show and had a few things they’d like to let Futurelooks’ readers in on… 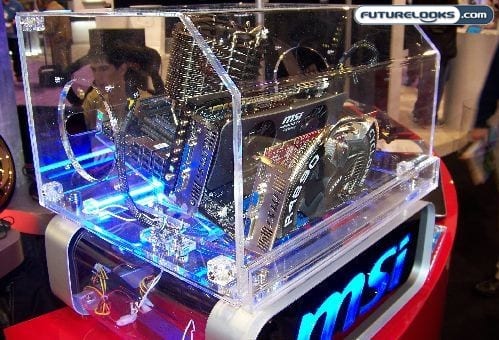 Don’t eBay your mismatched PCI Express video cards just yet. During our visit with MSI Computer, everyone got an up close look at the Big Bang Fuzion series of motherboards. This new series features the new Lucid Hydra chip which allows the board to operate any ATI or nVidia PCI Express video card together, allowing them to scale in performance sort of like how SLI and CrossFire do when you use matching cards.

Rajiv Kothari of MSI Computer take us through all the features of Big Bang Fuzion boards arriving at the end of January 2010:

It’s great to see high quality features like Quantum Wave Audio with EAX 5.0 and THX Audio as well as a couple you’re familiar with already like OC Dashboard and OC Gene for that quick on the fly overclocking with just a press of the button. It’s definitely one of the the easiest way to overclock a system!

Speaking of Overclocking, Rajiv also had a moment to take us through their AfterBurner software:

As mentioned, the voltage tweaking when using one of MSI’s own video cards is definitely an advantage for any enthusiast. Not to mention, MSI video cards are typically priced competitively with the competition, making this a definite feature that you’ll want if you want to take your overclocking seriously.

MSI is clearly serious about performance and overclocking in 2010. With both AfterBurner and Big Bang Fuzion, it definitely looks like MSI is ready to fight for a spot in the performance motherboard market. 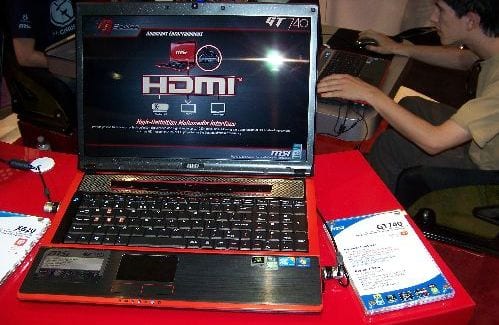 Not to be forgotten is MSI Computers treasure trove of notebooks computers. Among the very large array of the latest low carbon footprint laptops and netbooks, was the newly released GT740 Gaming Laptop. It comes with features like the a powerful Core i7 720QM Processor on the new H55 Chipset, up to 4GB of 1333MHz DDR3 SODIMM memory, and an nVidia GTS250 Graphics supplying the graphics horsepower.

While the rest of the market seems to be building low powered devices, this beast definitely looks like a bit of a dinosaur. However, if you don’t mind lugging it around, it can definitely provide you with most of the gaming juice that you normally get from a mid-range gaming desktop.

If you’re looking for more CES 2010 coverage do stay tuned and don’t forget to check out our YouTube Channel for more exclusive videos created by the Futurelooks Team.