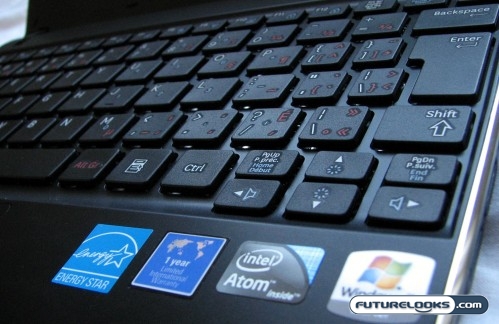 Despite what the folks in Cupertino may lead you to believe, the netbook form factor will continue to survive in the face of these new-fangled Internet tablets. The technology continues to advance in this realm, introducing us to higher-end finishes and improved horsepower. Just as the Intel Atom N280 provided some good performance upgrades over the N270, the “Pine Trail” Atom N450 is supposed to be pretty hot stuff too.

One of the newer netbooks to feature this processor is the Samsung N220 and, by the looks of things, it could be a very viable option for mobile computer users.

Easily the most notable feature that you’ll find on the Samsung N220 is the Intel Atom N450 processor. While it is not the dual core Atom that we all desire, the 1.66GHz CPU does offer two threads and a 512KB L2 cache.

Running our way through the spec sheet, we discover Windows 7 Starter as the operating system, as well as 1GB of DDR2 RAM, a 10.1″ WSVGA matte display, Intel GMA3150 integrated graphics, 250GB 5400rpm SATA hard drive, Bluetooth 2.1+EDR, 802.11b/g/n Wi-Fi, built-in webcam, and multitouch trackpad. For ports, you get a multi-card reader (in the front), three USB 2.0 ports, a VGA port, LAN port, and jacks for headphones and a microphone. 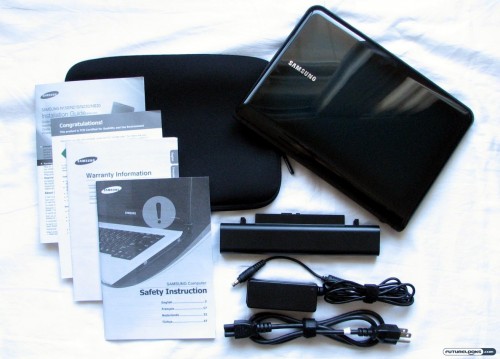 Cracking open the stylish brown paper box, you find the usual assortment of accessories that accompany most netbooks. In addition to the Samsung N220 itself, there is the six-cell battery, power supply with wall cable, and the supporting documentation. There is also a neoprene protective sleeve included in the box. It’s plain black and a little on the thin side, but the zipper portion does have a raised ridge on the inside to protect your N220 from scratches. The non-zipper side, however, feels quite cheap by comparison. 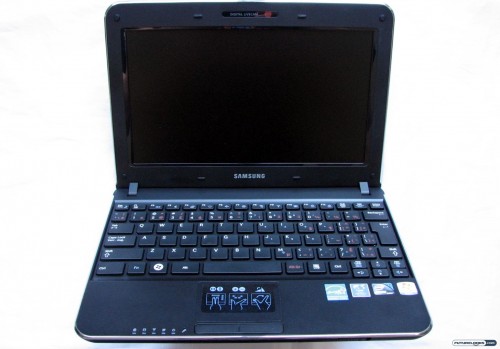 One of the first things that struck me about the Samsung N220 was the choice of materials. It feels a little more like a premium product, thanks partly to its superior build quality, but mostly because of the choice of plastics. The keyboard and palm rest area is a matte black that exudes a certain aura of class and the whole thing feels quite solid in my hands. This is in sharp contrast to something like the Gigabyte M912, which despite being much more expensive, felt quite cheap in the hands.

This Samsung netbook otherwise looks like a pretty standard netbook in stature, but it is interesting that the multi-card reader (SD/SDHC/MMC) is located in the front rather than on the sides. Similarly, there is the power slider switch in the front, rather than somewhere above the keyboard.

Just like what they do with their LCD monitors and HDTVs, Samsung has also taken the Touch of Color styling cue to the netbook. The top cover may look like a regular glossy black, but this version actually has an aqua green tinge when held under certain light. It’s an extra dash of class that sets it apart from many other netbooks.