Every Port and Jack You Want 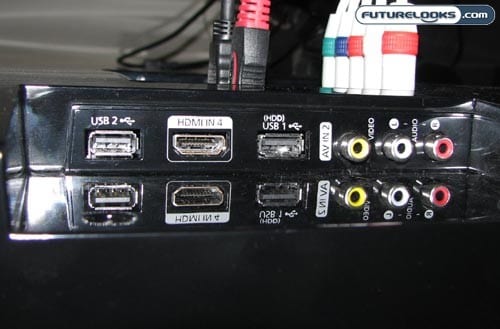 While you will certainly be using the access panel on the back of the television for most of your connections, it is nice to see a healthy assortment of ports along the right side (when facing the TV) too. This way, anything that isn’t going to be all that permanent can still get hooked up without having to rip the unit off the wall or climb in behind your entertainment center.

Along the right side, you’ll find a pair of USB ports, a single HDMI port, and a set of inputs for RCA audio and composite video. There’s no component access here, but the three other options are more than enough for most temporary connections. The USB port is particularly handy, because this is where you’d insert USB flash drive for the integrated media player function. 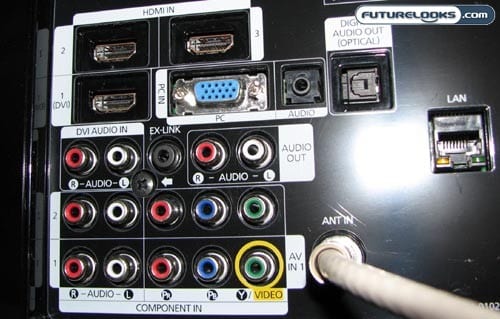 Moseying around to the rear, you’ll find that the panel with all the ports is actually located off to the side rather than smack in the middle. It’s on the left side (when facing the back of the TV), so it’s not that far away from the side access panel.

Once again, you get a reasonably healthy complement of ports and jacks. Along the top are three HDMI ports (in addition to the one on the side), the PC input (VGA) with a stereo mini jack for audio, and a digital (optical) audio out. One of the HDMI ports can be used for DVI instead, but you’ll need to provide your own adapter.

Moving our way down, you get two component video inputs (one of which can be used for composite), stereo audio-in and out ports, the antenna port for your cable TV, and the LAN port off to the side for network functions. All in all, I don’t have any complaints regarding connectivity. 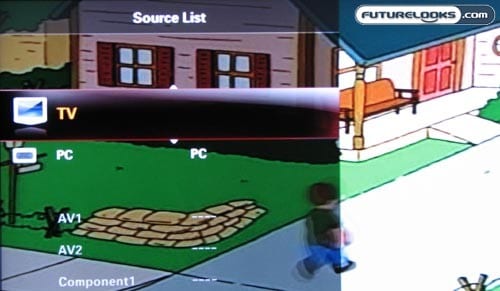 To give the Samsung LN55B650T1F a proper run for its money, I tried a myriad of different devices. Watching cable TV straight out of the wall was acceptable, I suppose, but I’m sure you can figure that the 480i resolution stretched over a 55-inch canvas leaves a lot to be desired.

Using the Asus O! Play HD Media Player with an HDMI cable was a vast improvement, of course. The colors were rich and vibrant and I was very happy with the viewing angles as well. The dynamic contrast was well within the acceptable range, though the blacks weren’t quite as dark as I would have hoped.

No Noticeable Motion Blur in Gaming? 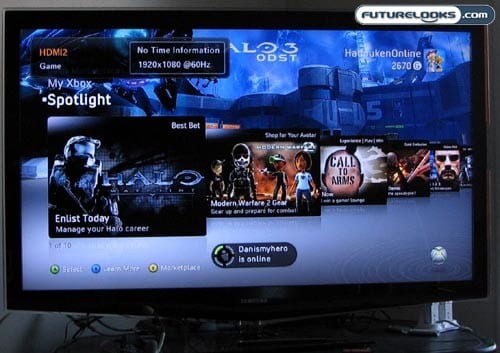 If you were to ask someone a few years ago, they would tell you that LCD HDTVs suffered from motion blur and that you could really only overcome this by going with plasma instead. The gap between the two has been greatly reduced and Samsung takes it half a notch further with 120Hz Auto Motion Plus. This “intelligently estimates the action, then creates and inserts an extra frame between frames to create a much shaper viewing experience.” To put this to the test, I tried my hand a few video games on my Xbox 360. I played NHL 10, Tekken 6, and Guitar Hero World Tour.

In terms of the action on the screen, I found the movement to be fluid and with no real noticeable motion blur. I did encounter an issue with Guitar Hero, though, when the vocal track started to get “chopped up.” I can’t say for certain whether this is a product of the TV, but I did not have this problem with my smaller 32-inch Samsung Series 3 LCD.