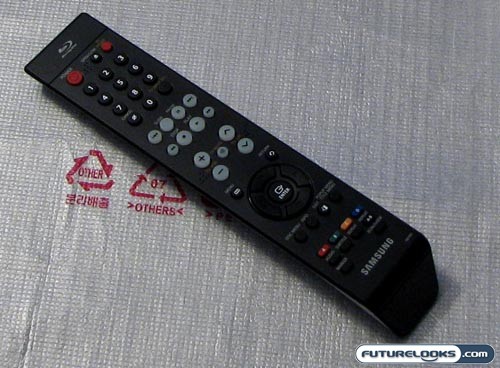 As far as I can remember, Samsung hasn’t done much to change the remote on this Blu-ray player compared to its older counterparts. This is unfortunate. The player itself has good build quality and looks great, but the remote feels cheap by comparison. The choice of plastic is like that of a $10 universal remote. I also don’t like how the back side of the remote is not black; it’s a light gray. The confusing buttons near the bottom of the remote need some work and, unlike the remotes found on many of Samsung’s HDTVs, the buttons cannot be illuminated. It’s definitely no Harmony One Remote.

If you’re hoping to use the Samsung BD-P1500 as your all-in-one video system, you are going to be sorely disappointed. The player will access BD-ROM, DVD-Video, DVD-R/RW, Audio CD, and CD-R/RW discs, but for whatever reason, it won’t take DVD+R/RW discs. Furthermore, the BD-P1500 cannot be used as a DivX player, nor will it accept MP3 CDs. Seeing how both the Xbox 360 and PS3 can be used as home video streaming media machines, I can’t see why a standalone Blu-ray player can’t do the same.

The back of the player is similarly barebones. You can do composite or component video to accompany the stereo analog audio, but there is no built-in support for 5.1 speaker systems. For that, you’ll need to use the provided optical digital audio out, leading it into your own home theatre receiver. There is also the HDMI port, of course, but there is no port for DVI. For that, you’ll need to provide your own HDMI-to-DVI cable or adapter.

Lastly, you’ll find the LAN and USB ports. Before you get your hopes up, the functionality of these two ports is severely limited. You can’t use the USB port to send MP3 files or AVI video files, for example. Getting a firmware update is the sole purpose of the Ethernet and USB ports.

The Samsung BD-P1500 Blu-ray player also functions as an upconverting DVD player. What this means is that you can insert a regular old DVD and it will upconvert the feed into simulated high-definition. It’s not quite the same as watching a true 1080p movie on a Blu-ray disc, but the experience is better than a regular standalone DVD player.

Video quality was good and load times were in line with most other DVD players on the market. There’s nothing to write home about on this front, but considering that respectable upconverting DVD players can be had for under $100 these days, you shouldn’t expect anything groundbreaking here either.