The look, feel, and build quality of the drive is one thing to consider. Perhaps more important to many power users, however, is the overall performance of the drive. To test that, I used CrystalDiskMark 3.0 on my Dell Inspiron 640m.

The test rig has an Intel Core 2 Duo T5300 (1.73GHz) processor, 3GB of RAM, and XP Home SP3. I stuck with the default settings on CrystalDiskMark, so it does five passes with 1000MB worth of data, averaging it out to produce overall read and write speeds for both sequential data transfer (using 1024KB blocks) and random data transfer (using 512KB blocks).

For comparison’s sake, I ran the benchmark on the Patriot Xporter Rage, a 32GB Kingston DataTraveler 150 and a 4GB OCZ Rally2 drive. 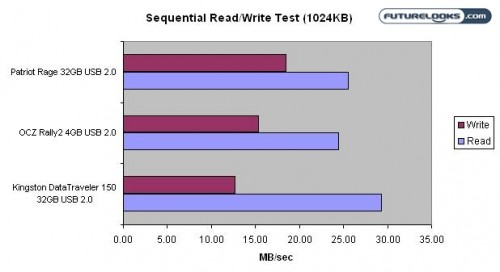 A similar phenomenon was observed when it came to the random read/write test as well. The Patriot clocked in at 1.51MB/s for write, compared to the 0.92MB/s for the Kingston. The read speed on the Rage was recorded as 25.69MB/s, slightly beaten by the 29.50MB/s for the Kingston.

Shown above is the complete data table, in case you want to see all the numbers. By and large, the performance of the Patriot Xporter Rage is within the acceptable range of most consumer-level flash drives these days. Even the diminutive Super Talent PICO-C Gold had a read speed of 24-26MB/s.

The Patriot Xporter XT Rage 32GB USB flash drive (PEF32GRUSB) is listed at just under $100US, but you can find it available through a number of online retailers for as low as $66.99 US. That’s about the same price you’d pay for the same capacity through other manufacturers too.

The overall performance of the drive is pretty much on par with its competitors, neither underperforming nor surpassing its compatriots by comparison. The quad channel technology really didn’t give the Rage that extra edge. Even so, the rubberized coating, rugged-like design, and cap-less retractable design help to make the Xporter XT Rage is suitable option for anyone needing a larger drive that can stand up to daily abuse.