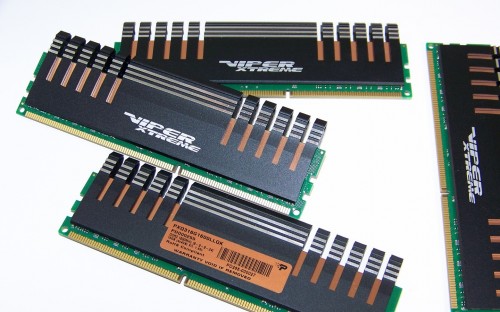 Since the latest Sandy Bridge and Sandy Bridge-E processors rely on memory straps in the BIOS, the options are essentially 1333, 1600, 1866, and 2133 MHz. That means the memory kit needs to be able to overclock an extra 266 MHz without using voltage that exceeds safe limits. For us, that’s 1.68 volts.

The Division 4 1600 MHz kit did in fact reach 1866 MHz using CAS 10 latencies. In other words, the system resolved memory timings to 10-11-10-30 to achieve stability. In most real world use, this overclock is basically unnecessary. You’ll see why in the memory benchmark and Cinebench results next.

This benchmark loads the memory and CPU’s integrated memory controller to measure data transfer rates between the two. In this respect, the XMP profiles are used in the BIOS which means the Gulftown and Sandy Bridge are slightly overclocked. Still, you will see the differences between the number of memory channels in use. 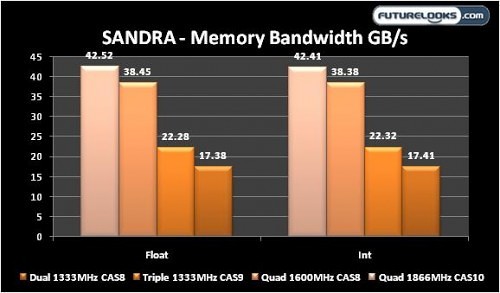 As observed, the data transfer rates increase each time a stick, or channel, of memory is added from system to system. Quad channel really screams producing just over 38GB/s (per second) data transfer rates. Notice that overlocking the kit doesn’t improve bandwidth that much due to the CAS 10 latency timing.

Cinenbench rendering is completely CPU intensive and means moving a lot of data back and forth between the processor and memory. For this benchmark, I used just the Division IV memory at 1333 and 1600 MHz using different memory timings so you can see the effect they have on CPU performance. 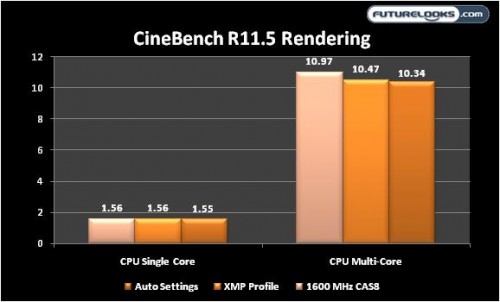 While the bulk of the scores are due to the CPU, you’ll notice that memory frequencies mostly influenced multi-core scores. Depending on your motherboard’s BIOS, your auto settings may do better. The XMP Profile can also be effected by the BIOS. And, just to be sure, manual settings were applied which is reflected in the results. Big rendering jobs get done faster with faster memory.

Alright, we know that memory speed helps the CPU. But what about something a bit more real world that tests a system’s overall performance? PCMark07 is about as good as it gets in that respect. Let’s see how it does when manipulating some memory timings. 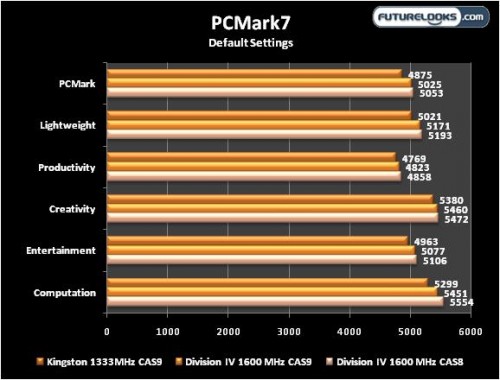 Since the bulk of the performance comes from the processor, I tested the main X79 system using dual, triple and quad channel configurations. Keep in mind the processor and memory can do a lot more when an SSD is used. Thus, we see the difference between the frequencies and timings again.

Good quality memory with low timings can do a lot for your processor especially with large programs. The Division IV 1600MHz quad channel kit features CAS8 timings which will give your system a noticeable boost in productivity. While it may not increase a game’s frame rates, it does help load your large games like Battlefield 3 a bit quicker especially if your system has a SATAII or SATAIII SSD.

Besides the great CAS8 performance, the Patriot Memory Viper Extreme Division IV series look really good. The black heat spreaders are simple yet aggressive in appearance. The copper insert adds a neat little accent to it that helps create what I feel to be the best looking black memory currently available. It’s definitely a performance enthusiast quad channel memory kit worth high consideration.

Ultimately, it comes down to price. The Viper Extreme 16GB CAS8 memory retails for about $110 US at Amazon which is the same cost as similar CAS9 memory from competitors. But if you’re in need of lower profile, attractive, enthusiast level DDR3 Quad Channel memory kit, the Viper Extreme Division IV is what I would recommend today.