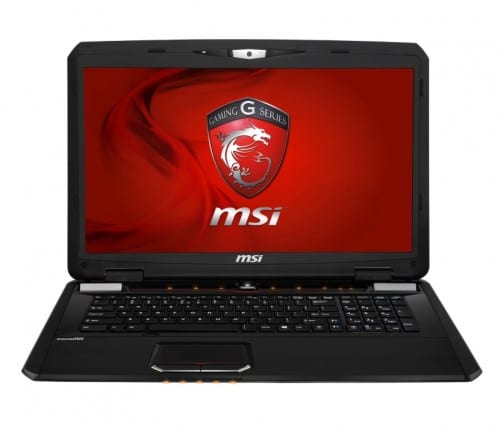 While the news has been mostly focused on the upcoming release of Intel Haswell; however, AMD is also releasing an update to the A10 APU lineup. As with previous releases, laptops will be the first to show off the new APUs and MSI will be first with their A10 Richland Mobile Gaming laptop.

The MSI GX70 and GX60 will be getting an update with the new AMD A10-5750M a combination of the Enhanced Piledriver cores and Radeon HD 8970M. MSI estimates an improvement in visual performance by up to 40 percent over previous generations. The new APU also increases battery life for both gaming and daily use.

In addition to the new Richland APU, the G series continues to include the Killer 2200 NIC, SteelSeries backlit keyboard, and THX sound with built-in subwoofer. The GX70 and GX60 promises to be the most power gaming laptop without a dedicate graphics processor. And if previous generations are any indication, some dedicated graphics units will get a run for their money as well.

MSRP will be $1299 US for the 15.6 inch model and $1399 US for the 17.3 inch unit with Windows 8 onboard. You can find out more in the press release linked below as well as the full spec sheet in the photo gallery.

Part of MSI’s award-winning G Series gaming laptops, the all-new GX70 and GX60 are now upgraded with AMD’s newest processor, which promises an increase in visual performance by up to 40 percent over previous generations. The new processor also increases battery life and CPU performance, resulting in longer gaming sessions with crisper, brighter and a more realistic visual experience.

“The GX70 and GX60 deliver the ultimate sensory experience for both professional and amateur gamers,” said Andy Tung, vice president of sales for MSI US. “MSI is committed to the gaming community and we understand that cutting-edge components results in exceptional performance.”

For more information about the GX70 or GX60, please visit http://www.msimobile.com or http://www.usgaming.msi.com/.