Making Sure You Get All Eight…Gigabytes… 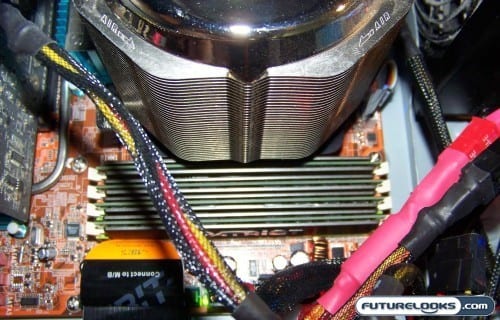 The trick to ensuring memory is compatible with your motherboard is by checking out its specs. Some older boards simply do not support this much memory or required specific types of memory with particular specs. If you’re out searching for a DDR2 motherboard, make sure you choose a good quality platform with an nVidia 590-SLI or newer, or AMD 790 Chipset for optimal performance. The latest of the DDR2 Chipsets can handle the lower 4-4-4-12 timings where as some early revisions may require 5-5-5-15 timings which isn’t a big deal.

Once you’ve got them installed, you can try powering up. If you get to the desktop, then your system is happy and ready to go. However, if your system exhibits sluggishness and random strangeness, it might just be that your motherboard just won’t play nice with all four slots filled. Then further troubleshooting will be required or perhaps an adjustment to voltage. Some older boards only support up to 2.1 Volts while this kit requires 2.2 Volts.

Running with memory in all four slots does require a bit of tweaking for some boards but hopefully our benchmarks show that it’s all worth it.

Since we know 800 MHz DDR2 memory works great for gaming, the bulk of the testing involved more professional as well as realistic uses for the Quad Kit. Only one gaming benchmark using Crysis was included. Otherwise, SANDRA CPU, Memory Bandwidth, and MPEG4 Encoding completed the test suite.

In order to properly test out the modules, we built two systems based on both an AMD and INTEL platform that uses DDR2 modules. Here are a look at the specs…

Overclocking wasn’t part of the exercise due to some chipset limitations in regards to support for this amount of memory. Each motherboard was able to overclock two memory modules to about 1000 MHz, but when all four modules were used, the systems couldn’t maintain stability beyond an extra 50 MHz even when adding extra voltage. If it’s overclocking you want, consider using two faster rated modules. 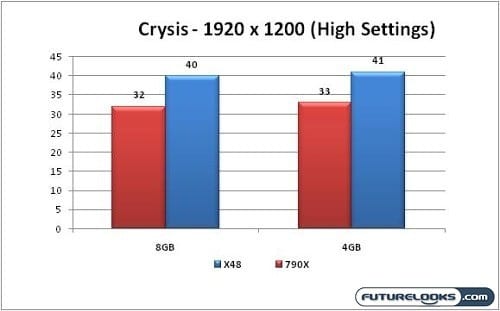 Again, with a capable video card installed, even the AMD X2 6000 made quick play of Crysis. As you can see, DDR2 might not be new hotness anymore, but it’s still quite capable in a solid gaming system. 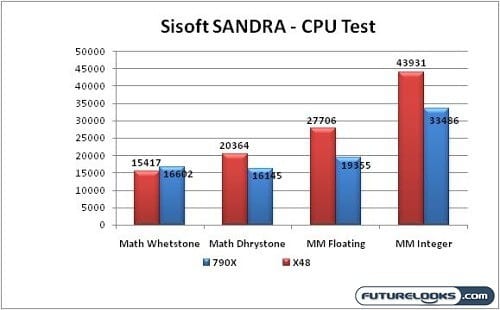 Compared to other systems of the same caliber, DDR2 has no problems keeping the processor swimming in data. These are very healthy results even on a Dual Core, whether INTEL or AMD.