Origin on the other hand has exactly that, nothing. I gave my account information to a colleague and he was able to access my Origin account with no issue. There’s no extra security measures beyond an email and password.

While game purchasing and management is nice, both software platforms need to offer more to the players to make their use compelling. In this section, we’re simply ignoring both being requirements for certain titles and look at why anyone would use the software beyond buying games. 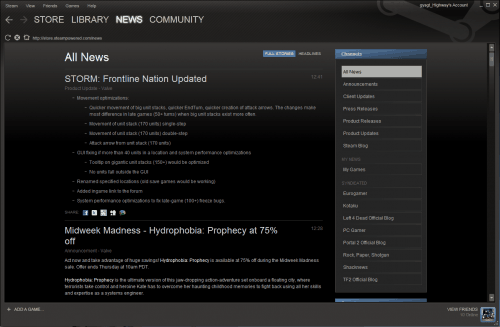 As mentioned before, Steam also has a News and Community section. Both of these do exactly what their titles imply. The News section is an RSS feed reader that keeps up news about game releases, updates, L4D2 weekly mutations, game news and random funny stuff game related.

The Community tab provides access to Steam Groups, metrics on your friends and a place to have your personal page with Steam. There is now a section to post, view, and share screenshots. Reaction to the Community section is mixed as some players don’t like their friends knowing exactly what they played and achievements they received. While other enjoy it for the exact same reasons. 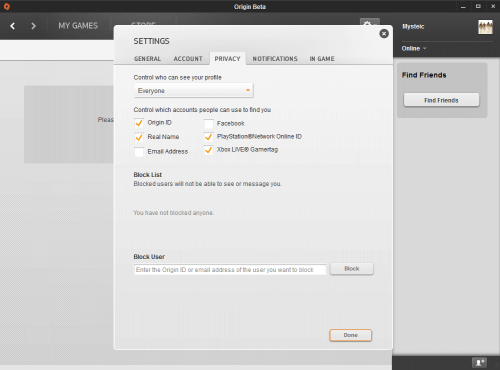 Origin is just too young to offer additional features. I can’t hold this against the software and I applaud EA’s Origin development team for showing restraint at first. It is a good idea as this is new territory for them to get the core of the software working well.

Origin is already leaps and bounds better than the EA Download Manager it replaced. It is said the first step to innovation is imitation. It seems to be a solid foundation for EA to build on and hopeful will provide competition for Valve in the future. I am glad someone else is trying this approach and hope EA brings innovation to the software distribution platform.

Since Origin is now the EA account management service I have to use it in Battlefield 3 for its news feed, buddy list and friend feed. This is perfectly fine with me and I hope it it carries over to all EA titles so I don’t have to manual find my friends again with every new title.

I cannot say for sure if this will work as intended with the final version of Battlefield 3, but there is a communications disconnect in the Beta. Battlelog, which handles servers and stat tracking, has its own friend list. There was a way to import your Origin friends, but this feature did not function at first.

Once this issue was corrected, Battlelog made Origin virtually unneeded as it was delegated back to just being a download service. I personal never even bothered to turn Origin on during the Beta, though Battlelog would launch it for some reason once I attempted to join a server. Battlefield 3 Beta and Battlelog currently take focus away from Origin, which is bad for the brand. 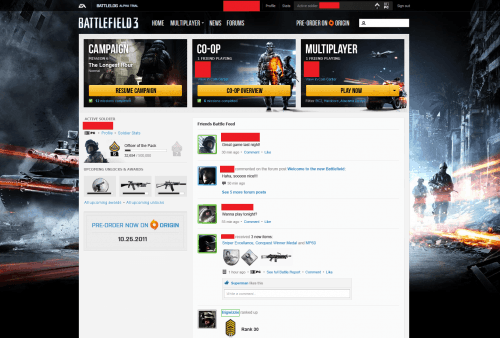 Lets talk about the elephant in the room. Many of you have seen news articles on the Internet about the issue with several EA titles and them being available on Valve’s Steam or not. The issue first came up when Crysis 2 was removed from Steam around June 12th. This occurred about a week after Origin was first available on June 3rd. Shortly after this, several other titles including Alice: Madness Returns and Shank were also removed. EA was quick to point the finger at Valve and claim their Terms of Service was changed recently causing this issue. Valve has not responded to this claim publicly to my knowledge.

A few weeks back, salt was thrown in the wound by EA when they publicized a list of digital distributors to have Battlefield 3 available for purchase. As Steam was noticeably absent, every game and tech site quickly posted this information. As a gamer, I am also upset about this but not for the same reason everyone else seems to be. I am upset because this is just another example of EA trying to throw its weight around.

EA’s initial claim that the problem was due to a recent change to Valve’s TOS doesn’t hold water. A change to Valve’s TOS should affect every game license they have or will have, yet only EA’s triple A titles of Crysis 2 and Battlefield 3 are being affected. Shank and Alice were both returned to Steam. In addition, not one other company has removed a current or upcoming titles from the service. 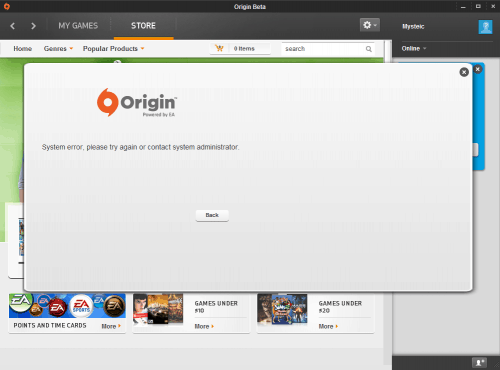 People here at Futurelooks.com have sent EA e-mails asking to provide us with more information. I personally sent one back in June related only to Origin as the Battlefield 3 issue had not arose. We were ignored. Another news site did manage to get EA to say the problem with the Terms of Service is related to how Steam requires DLCs and patches to be delivered.

Once again the evidence doesn’t support EA’s claim. It is true Steam does like to handle patches and updates to all titles available from their service, but I am sure this is a convenience not a requirement. I own at least 7 titles (5 of which are owned by EA) that have patches, DLC, and required updates either solely distributed or available outside of Steam. Bioware’s (owned by EA) exclusively does in game and site based purchases for DLC for all their titles.  This suggests to me the issue is really related to either the DRM being used by EA for up coming titles or EA looking to maintain more control over their content.

Several online only sites like Newegg.com that sell Battlefield 3 were also left off the list of digital retailers, yet Amazon was included. I hope EA takes note the only one people cared about was Steam. Bad Company 2 did not appear on Steam until only a few weeks away from release while other services had it available months in advance. This at least means there is some hope EA and Valve will work this out. I am just sad to see EA has gone out of their way to make themselves the bad guys.

Help Us Improve Our Articles by Leaving a Comment Below!