I’ve reviewed my fair share of notebook coolers and stands in the past, so you could say that I know a thing or two about what is currently available on the market. In reviewing these different coolers, I inevitably come across a gripe or two that I will have about each one. An aluminum stand, for example, may not have any slots cut into it and as a result, the vents on your laptop are blocked. Not good. On the other hand, I’ve also seen some decent powered solution, but they are made of some awfully cheap plastic.

It’s almost as if the developers at NZXT went through all of my previous notebook cooler reviews to see what I thought of them, because the Cryo LX addresses many of the issues that I have had with other products. You may better know NZXT as a company that produces power supplies and desktop computer cases, but they’re starting to expand into other realms as well. Based on my experience with the NZXT Cryo LX Notebook Cooler, this is a good move on their part.

Before we proceed, let’s have a look at the official spec sheet for the NZXT Cryo LX aluminum notebook cooler.

Indeed, big and beefy is an understatement. The NZXT Cryo is definitely LX, or rather XL! 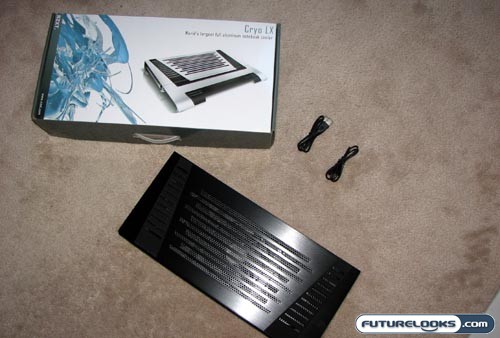 The NZXT CryoLX comes with not very much. Inside the box, you’ll find the notebook cooler itself, along with two cables. The first is used to provide DC power to the cooler via your notebook’s USB port, whereas the second provides connectivity for the integrated four-port USB hub. There is no instruction manual, but if you can’t figure out the two cables, you’re pretty much a hopeless cause. 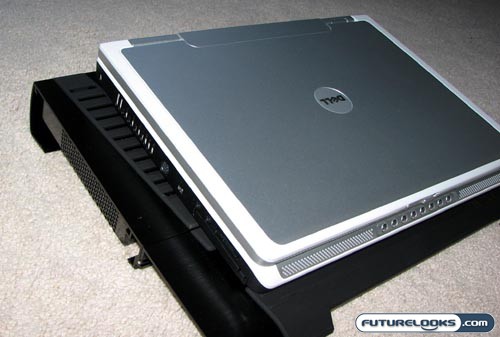 The first thing that you’ll notice about the Cryo LX is that this is one big honking thing! When I place my Dell Inspiron 640m (14.1-inch widescreen) on the notebook cooler, there is about two inches of extra space in every direction. That’s because the Cryo LX has been designed to accommodate laptops as large as 19-inches. You can tell that NZXT has serious power users in mind with this product and it really shows.

The build quality is absolutely exceptional. They didn’t go with cheap plastic or a thin sheet of aluminum. Instead, the entire Cryo LX is made of very thick aluminum and it has high quality rubber grips on the surface for holding your notebook in place. This rubber also ensures that the base of your laptop is slightly elevated from the surface. The black brushed aluminum (it’s also available in silver) looks great and feels very strong. 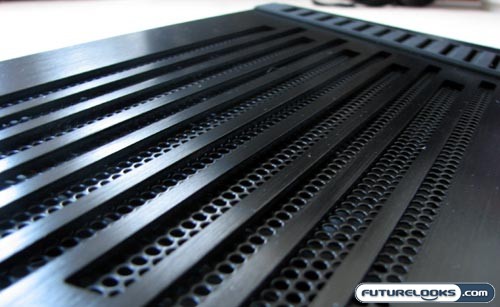 The bottom third of the Cryo LX can be folded away for ease of storage, and you simply flip this portion out when you’re ready to use your laptop. There is no locking mechanism, so it can be a little frustrating if you’re trying to set up the cooler using one hand. The large size prevents the Cryo LX from being a good candidate for portability. 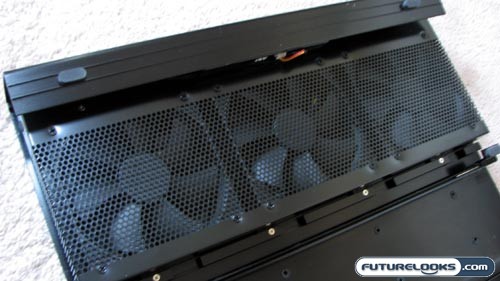 There’s not just one fan. There aren’t just two fans. NZXT has decided to include a trio of 120mm fans in the Cryo LX notebook cooler. Some people may think that this is overkill, but it does provide for some rather even cooling. Each of the fans has been enclosed in an aluminum grating to prevent the chopping of children’s fingers. This is one detail that is missing from many of its direct competitors. 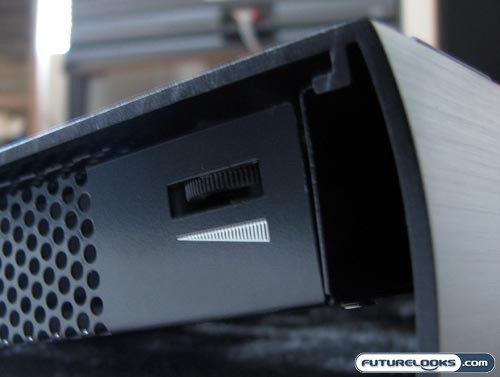 Along the right side of the Cryo LX is a small dial that can be used to adjust the fan speed. The difference between the lowest and highest setting is quite substantial, but even at the lowest setting, the fans can be quite noisy. This is not for the feint of heart. It’s also unfortunate that the dial cannot be used to turn the fans off altogether. This would have been a nice inclusion.