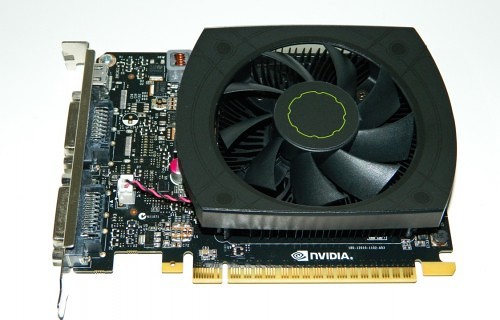 When I installed the GTX 650 Ti, my daughter asked if it’s possible that it comes in pink because it was so cute. It’s rare to see something marketed towards gamers that did not come with an enormous cooler. Although I would have liked to have used a mini- ITX board for testing, we’ll still need to see how it compares to its full sized competitors and for that, we’ll need a full sized system.

Screen resolutions are set at 1920 x 1080p on an ASUS VG27H 3D monitor. Benchmark resolutions are in the graph details. Power consumption was monitored to confirm the card consumes a measly 100 watts. Fan noise was recorded using an Extech sound meter which detects noise down to 30dB at 4 feet from source. 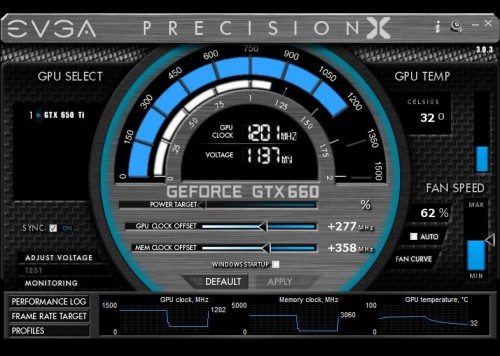 I used EVGA Precision X to try and get some extra frequency from the reference card. The reference card overclocks but requires manual fan control to make that happen otherwise it over heats quickly. Ultimately, at 1138mV the GTX 650 Ti overclocked to 1201MHz core and memory offset to 358MHz. Remember, stock is 925MHz core so that’s a 276MHz core overclock! This resulted in about a 14 frame gain in most the games tested which is reasonable trade for the extra heat.

Naturally, a better cooling solution is needed to support overclocking. Keep in mind this is a reference cooler and partner cards will almost certainly offer higher frequencies and more memory as well. We definitely trust those cards for extended overclocking more than we test this stubby little PCB. 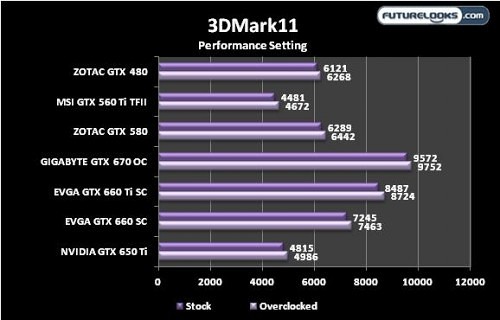 The GTX 650 Ti is still a strong little GPU despite it’s size. I wasn’t expecting the card to score so well over its older Fermi cousins. But it’s obvious this little Kepler has a heart of sheer will power. 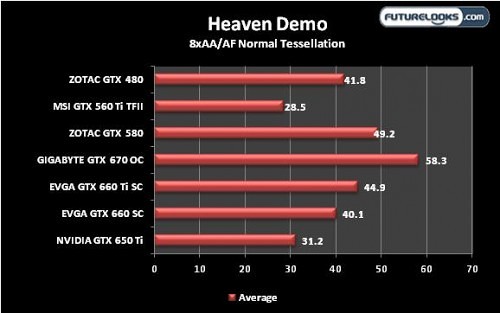 Again, the mini-Kepler surprises us, scoring better than even the GTX 560 Ti. This benchmark typically slaps cheaper GPUs around given all the extra settings. I can’t help but chuckle a bit looking at this little card on the open bench test system. I guess size really doesn’t matter in this case.

Now, let’s see what kind of frame rates the card gets in some hardcore game titles. 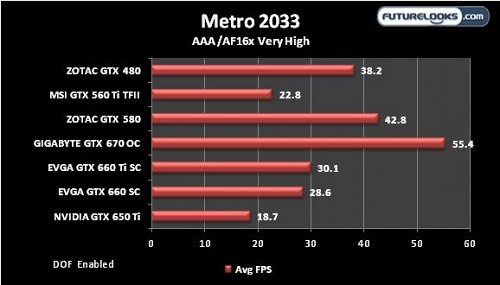 Metro 2033 requires a boat load of card resources and the higher memory bandwidth helps increase frame rates because of moving all that texture data. However, remember that this is at 1080p. If you turn down the settings a bit you can get another 10 frames out of the mini-Kepler which gets you just under 30 FPS. If you overclock it, you’ll get there with room to spare. 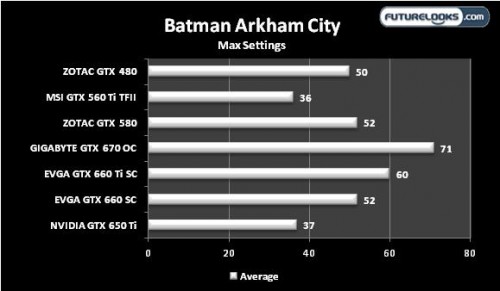 Batman AC is still quite playable with the new mini-Kepler. It’s not the smoothest at all times but definitely tolerable even with the PhysX settings enabled. It sure is a great looking game under Kepler with all the details turned on.