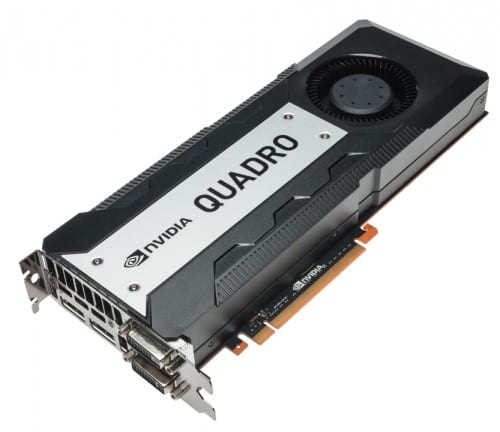 The graphics card market is always a dogged fight of territory, dominance, and market share. Nvidia and AMD pull no punches here any time they get into a fight. This time it is Nvidia throwing the first punch with the update to their Quadro workstation cards in the form of the new K6000.

The Nvidia Quadro K6000 may be the single most powerful workstation graphics card on the market. Starting with 12 GB of GDDR5 at 288 GBps making the K6000’s memory the fastest and largest available on a single card. This is paired with 2,880 streaming multiprocessor (SMX) cores based on the Kepler architecture. This is not a card for your average user, but it is still pretty cool.

GPU computing has proven itself to be more than for 3D rendering, video editing, and other more c0mputer intensive operations. If you’re a professional that is in need of the most powerful professional card on the planet for these and other purposes, then the Nvidia Quadro K6000 is currently the best of breed. In fact, this new Kepler has aided in professional duties from mining/drilling operations to finally rendering “Toy Story Like Graphics” in real-time. Something that Nvidia has been promising for quite some time.

Nvidia is leaving pricing of this new card up to its partners, but don’t expect it to be cheap when it launches later this Fall 2013.

“The Kepler features are key to our next generation of real-time lighting and geometry handling. We were thrilled to get an early look at the K6000. The added memory and other features allow our artists to see much more of the final scene in a real-time, interactive form, and allow many more artistic iterations.” – Guido Quaroni, Pixar vice president of Software R&D

“Compared to the Quadro K5000, the Quadro K6000 tripled the performance when running jobs on Terraspark’s InsightEarth application. With jobs running in mere minutes, we can run more simulations and get better insight into where to drill. In this business, drilling in the wrong place is a multi-million dollar mistake, and the Quadro K6000 gives us the edge to make better decisions.” – Klaas Koster, manager, seismic interpretation, Apache Corporation Unprecedented Performance The Quadro K6000 GPU is based on the NVIDIA Kepler™ architecture – the world’s fastest, most efficient GPU architecture. Key performance features and capabilities include:

“The NVIDIA Quadro K6000 GPU is the highest performance, most capable GPU ever created for the professional graphics market,” said Ed Ellett, senior vice president, Professional Solutions Group at NVIDIA. “It will significantly change the game for animators, digital designers and engineers, enabling them to make the impossible possible.”

The NVIDIA Quadro K6000 will be available beginning this fall from Dell, HP, Lenovo and other major workstation providers; from systems integrators, including BOXX Technologies and Supermicro; and from authorized distribution partners, including PNY Technologies in North America and Europe, ELSA and Ryoyo in Japan, and Leadtek in Asia Pacific. The new Quadro mobile workstation graphics product line will also be available beginning this fall from major mobile workstation OEMs.