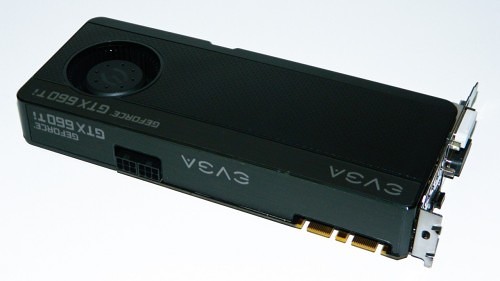 First up is EVGA’s GTX 660 Ti Superclocked edition which will join a whole family of SKUs based on the GTX 660 Ti GPU. Our sample is the one in bold which features a reference style cooler tacked on to the smaller foot print PCB. It’s aimed at offering serious graphics users a more affordable card without the cost of a fancier cooler.

As mentioned, there are several different SKUs coming from EVGA that range from stock to FTW which naturally feature the most cherry picked GTX 660 Ti GPUs. These are often capable of impressive overclocking. The FTW often sport the nicest coolers as well which is important to hardcore DIY users who like to show off. But back to the Superoverclocked edition, the aluminum heat sink is still quite large meant to cool all the vital power components and memory ICs. 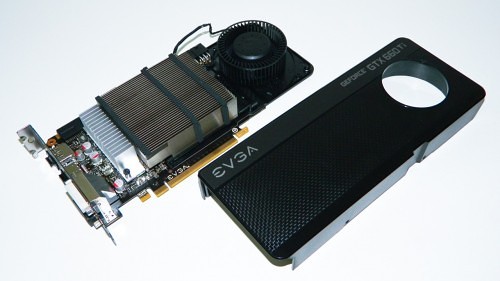 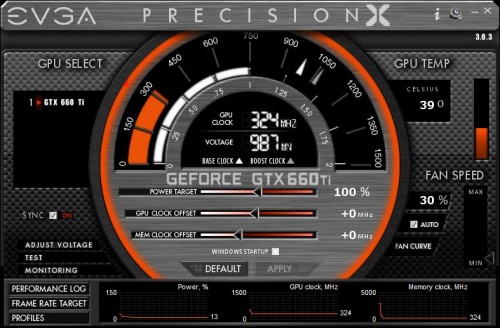 EVGA updated their PrecisionX overclocking and real time monitoring software recently with some additional tweaks. With this utility, users can control the GPU, fans, power, and memory. And, naturally it syncs all your settings across multiple cards in SLI mode. There’s also a special GTX 660 Ti skin available. Just add the skin, select the skin in the settings, and apply. Easy.

After applying your settings, users can utilize the new OC Scanner X which stress tests and monitors your overclocked card. There’s a built in GPU-Z type specification tab which works in conjunction with the cards major components and reveals hidden attributes. And, yes, the software works on any NVIDIA based video card. They really spent a lot of time on this utility and it shows. 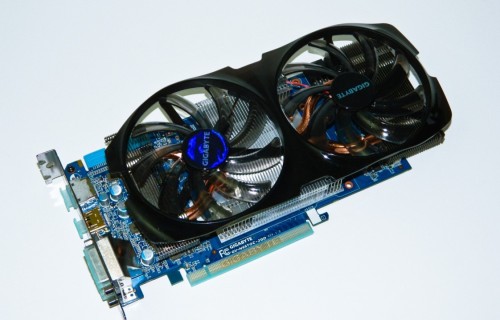 Returning to our lab is another one of GIGABYTE’s Windforce cooled GPUs. The GTX 660 Ti OC (overclocked) video card sports the highest GPU frequencies of the three at the $319 price range, making it the most expensive GPU in this round up. It’s designed around the company’s Ultra Durable PCB and component selection which specifies better capacitors, chokes, and the signature 2oz PCB. The card is built on the shorter reference PCB, making it easier to fit into more compact builds.

Naturally, being the highest OC’d GPU of the round up means extra GPU heat and the Windforce 2X (for dual fan) VGA cooler is used to expel that heat. The compact cooler features two large heat pipes fused to a smoother copper base that carries away the bulk of the heat to the ends where aluminum fins help dissipate heat. A secondary silver base plate cools the memory ICs and VRM components. Interestingly, two of the memory ICs are on the back of the card and not the side that touches the thermal pads. We’re assuming that because the back of the card gets more fresh air, engineers felt this was acceptable, but it might just have to do with the limited size of the PCB. 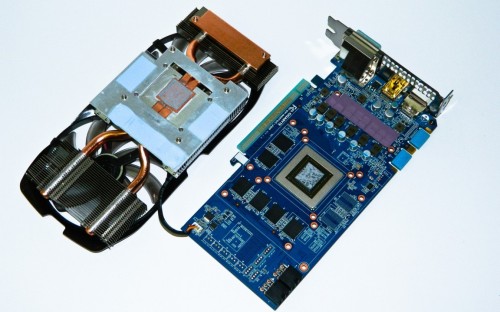 Unlike the EVGA card, the bundle is very basic in the GIGABYTE box. There are two 6pin PCIE to 4 pin MOLEX power cable adapters, a manual, and a driver DVD. The best part is that this card will work on a system with a minimum 450 watt power supply, making it’s size and it’s power consumption perfect for upgrading many pre-built systems on the market. Hopefully you have four unused 4-pin Molex connectors on your power supply.