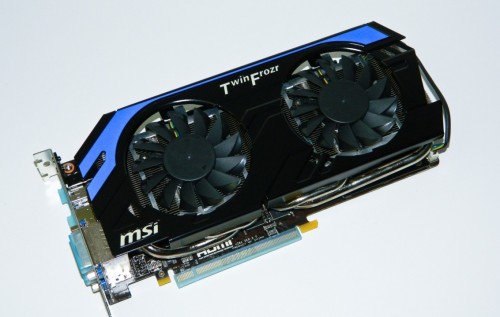 The Power Edition cards we’ve seen over the last couple years are a pretty strong breed. We saw this recently in their AMD HD 7770 GPU that we recently reviewed. The card is powered by a Triple Overvolt VRM design which does help overclock the GPU and stabilize power delivery. This requires a longer PCB design which is of no consequence if there’s a purpose to this. The cards till only requires two 6pin PCIE power cables.

The PE sports a black with blue striped Twin Frozr IV dual fan cooler. The cooler is substantial in design sporting four large heat pipes that stretch the length and width of the PCB. A secondary black plate covers and cools about half the components. In the past, typical loads pushed the fans to create about 20dB. Under atypical conditions, they can reach as much as 40dB in an effort to keep your GPU from overheating. 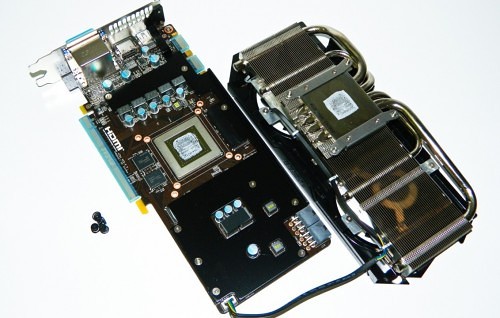 Our box bundle included two 4-Pin Molex to 6pin power cable adapters. While 450 watts is the minimum, I’ve found the PE series benefit from slightly stronger wattage PSUs, especially when overclocking and adding voltage. I would not recommend anyone overclock this card without a much more powerful PSU however so even the 450 watt minimum should really be updated.

Also in the box is a single VGA to DVI adapter, user guide, card documentation, plus a driver/software disc. MSI’s Afterburner overclocking and monitoring utility is included to get your OC fix. It’s been a staple piece of software for users and testers alike. 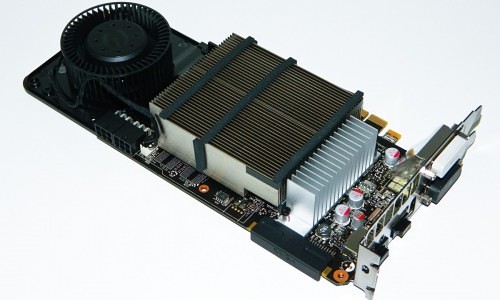 Installing your video card, video drivers, and any extra software is all part of the user experience. In the past, we’ve had a couple large cards require some effort due to really large PCBs and oversized PCI brackets. Fortunately, all the cards install easily and worked fine with the NVIDIA GTX 660 Ti launch drivers. Only the EVGA and MSI have their own official overclocking utilities which also worked without issue. However, both utilities also work for any supported NVIDIA GPU including the GIGABYTE card.

Here’s the test system break down…

Screen resolutions are set at 1920 x 1080p on an ASUS VG27H 3D monitor. Benchmark resolutions are in the graph details. Power consumption was monitored using a Seasonic Power Angel with a minimum of 1 hr observation time. Fan noise was recorded using an Extech sound meter which has a limited 30dB lowest noise level detection. Therefore, fan noise was measured from 2 feet away so we could hear SOME difference.

Not everyone likes overclocking the GPU because it’s a potentially risky business. It’s the one component that easily heats up inside cases especially when there’s limited air flow. Honestly, the gaming performance benefits are often marginal versus the risk. Unless it’s for bragging rights in benchmarks, most of the time, it’s not going to improve your gaming experience by a tangible amount. In any case, all three cards were pushed to see just how far they would go.

Top clock goes to the MSI GTX 660 Ti PE card which managed to successfully pull off the highest core base and turbo clock. The GIGABYTE GTX 660 Ti OC clocks in a bit lower followed by the EVGA GTX 660 Ti Superclocked. Naturally, the other side affect of overclocking, besides heat, is the additional noise generated by the cooling solution. The MSI card boasted the most noise at about 44dB followed by the EVGA at about 36dB. The GIGABYTE hit a comparatively pleasant 29dB.

EVGA’s Precision X and new OC Scanner X were quite nice to work with and relatively easy to figure out. On occasion, Precision X would need a setting applied more than once before it would take. But the utility works within Kepler’s power limits so it’s possible the right, or optimal settings weren’t being used on my part. MSI will have to work on updating Afterburner some more as the temperatures didn’t always report properly. Temps are important to be able to see when overclocking any component is starting to have adverse affects that need to be addressed.

Now on to the benchmarks! 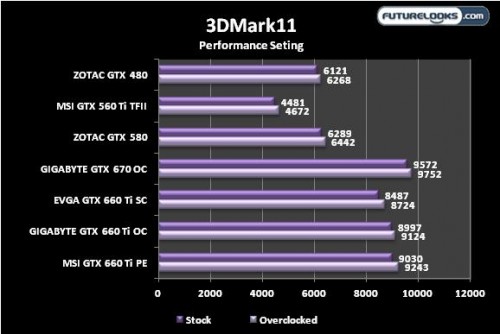 Starting off with synthetic benchmarks, the EVGA SC falls behind rather oddly. Granted, the card isn’t clocked as high as the OC and PE but the score seems a bit low. This benchmark isn’t the authority on 3D performance but it is recognized for giving us a general direction of potential performance. Let’s look at another one that can generate some frame rates. 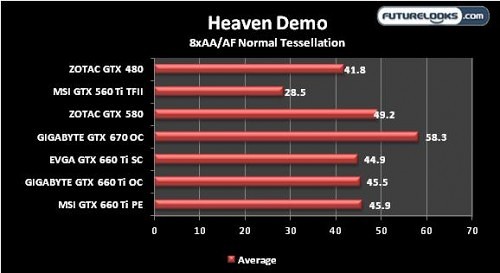 Under Unigine Heaven 3.0, the EVGA SC comes back to handle the tessellating, GPU crippling, Heaven 3.0 Demo. All three GTX 660 Tis leave one of our all time favorite GPUs, the GTX 560 Ti, in the dust. I’m beginning to love the new GTX 660 Tis and for good reason.

Let’s see how these tests translate into real gaming performance.