The Mophie Juice Pack installs very easily. With just a quick push into the precision formed shell, it is locked into place. There was no interference with any of the buttons, camera or headphone jack. However, when I tried flinging the combo at the couch, while hanging on to the Juice Pack, the iPhone 3G would dislodge itself, resulting in a slight flutter of the aorta. Luckily I was testing with the couch and not with the pavement. Removing it required a firm tug and wiggling so it isn’t going to slip off coming out of your pocket under normal circumstances. 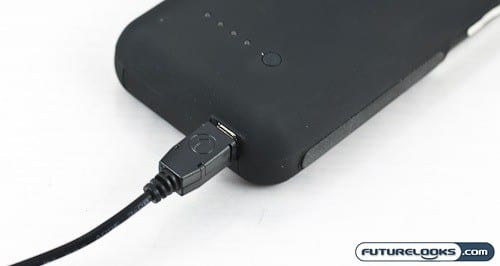 Charging and syncing is accomplished using a standard mini-USB cable like the one included, and is compatible with the wall plug adapter provided by Apple. I really liked that it worked the way it did as it also allows you to borrow a charger from anyone in the office or sync with any mini-USB cable in case you forget your signature white Apple one: it is no longer required if you have the juice pack installed. 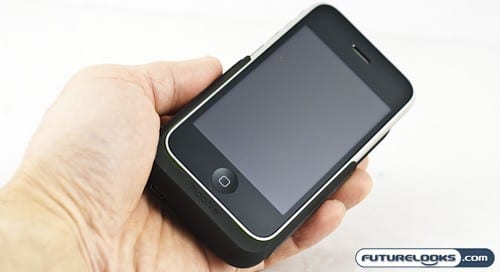 Once in your hands, the Mophie Juice Pack powered iPhone 3G feels quite solid and the texture and rubber grips provide a bit of confidence that it won’t come flying out of your hand. However, it will produce an unsightly bulge in your skinny jeans because it does double the thickness of the iPhone 3G.

If you insist on trying to cram the iPhone 3G down your tightest pants, the rubber side grips are glued on and as with all things glued, they will tend to peel when subjected to heat over time. It’s just what happens to things that are glued on. A better solution may have been a mechanical connection.

One thing about the non-slip surface that is good or bad depending on how you look at it, is how easily dust and scuffs show up on it. After a couple weeks of use, it really doesn’t look pretty anymore. But again, neither do fingerprints. Also, if you look at how scratched the Juice Pack is, that could very well have been your beloved iPhone 3G’s own skin.

As much as they tried, Mophie really wasn’t able to get this Juice Pack to really follow the lines of the iPhone 3G. You can clearly see that distinct separation between the design of the phone and the design of the battery pack. But functionally, it doesn’t interfere with any of the buttons or the camera. However, it just doesn’t look very well integrated and I know that some Apple purists are going to scoff at that for sure. It doesn’t help that the whole inside of the juice pack is neon green. You’ve probably figured out that you can’t put another case on while using the Mophie Juice Pack though I would imagine the ultra thin Invisible Shield products by Zagg would make it under the tight spaces.