Using the LG Optimus Quantum as our test subject, I went about typing out a variety of different things via Windows Phone 7. I composed e-mail messages, sent text messages, updated my Facebook status, and so on. This was done using both the virtual on-screen keyboard and the physical slide-out keyboard. 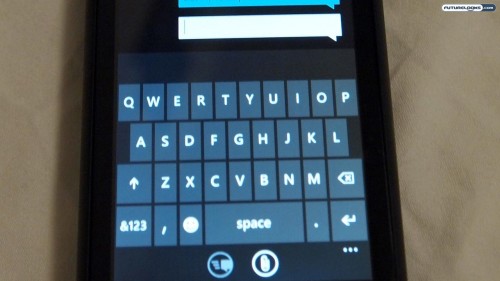 As I am partial to hardware keyboards, I found that option to be much more appealing. That said, the keys were too “smooth” and flush with the surface to provide the kind of tactile feedback that I prefer. Since some apps don’t auto-rotate to landscape mode, as mentioned earlier, this made for some strange typing situations too. This must be corrected as it only serves to ruin the user experience. But non keyboard phones should have less of an impact.

When it came to the software keyboard, I’d say the response was similar to the iPhone and Android phones. It did the job it needed to do and the LG-C900B offers haptic feedback too. This vibrates the phone ever so slightly with each virtual key press, giving you the illusion of a tactile sensation.

Social Media and Other Functionality 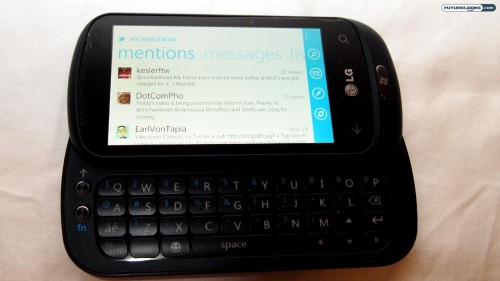 As can be expected with any modern smartphone, Windows Phone 7 is perfectly capable of handling all your social media desires. Facebook and Twitter do not come pre-installed, but there is something called “People” that can draw in your friend’s contacts and updates through Facebook and Windows Live. Oddly, you can’t comment or “like” any of these updates through “People.” That’s a strange disconnect. Thankfully, it’s not hard to find the official Facebookk and Twitter clients through Windows Marketplace. That’s also where you can download games (which show up under the pre-installed Xbox Live app), music (which get connected to the pre-installed Zune app), and more. 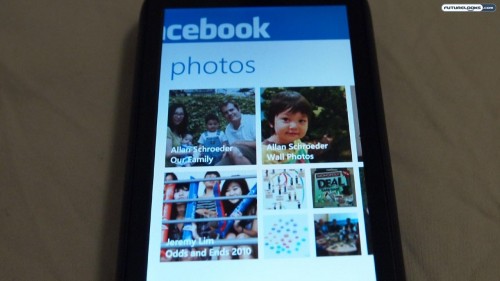 The Windows Phone 7 Facebook app is pretty interesting in how it displays your friend’s pictures, almost mirroring the tile-like appearance of the homescreen. The Zune-like fonts continue through both here and on the official Twitter application too. Naturally, third-party alternatives will evolve and grow with the times too.

Just as the iPhone ties into other Apple products and Android links up to your Google accounts, the same can be said about Windows Phone 7. Your default e-mail is through Hotmail. Your music is managed by Zune. This is both good and bad, of course, especially when it comes to the Bing default search engine (which you can’t change, but you can bookmark Google in the web browser). 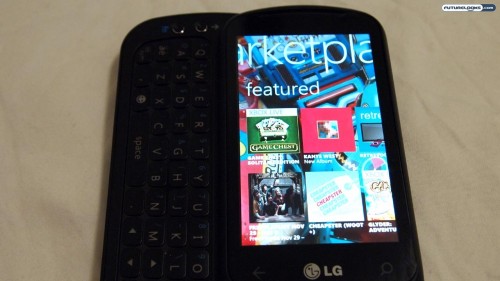 Considering where Windows Mobile found itself last year (along with the Kin), Windows Phone 7 is a monumental step in the right direction for Microsoft. It’s much more in line with the socially connected times and they’ve done a great job with making an aesthetically-pleasing interface.

The way that you make your way around social media is so much better than the silly TimeScape thing on the XPERIA. The live tiles are functional, simple, and attractive. By abandoning fancy visuals and going with clean yet brand-specific font styles, Windows Phone 7 certainly has a personality of its own. But it’s far from a perfect package.

The lack of copy-and-paste is odd. It’s also strange that you have to tap near the top of the screen to see your remaining battery life and signal strength; those should be persistent, at least on the home screen. While Android and iOS are both currently superior to WP7 in many ways, Microsoft has built itself a solid new foundation to grow and move forward. And come January at CES 2011, rumour has it that many of the current drawbacks of this OS will be alleviated. I guess we’ll see when Futurelooks hits the CES Show Floor in January.