As expected, Microsoft hosted a rather grand event yesterday, finally revealing the first couple of smartphones to be powered by the new Windows 10 mobile operating system, as well as update to the SmartBand wearable. In the context of computing, though, we got hit out of left field with the Surface Book, a device that none of us expected. And it sure sounds awfully glorious.

The Microsoft Surface Book builds upon the Surface name, obviously enough, but it is actually Microsoft’s first laptop. In fact, they’re going around call it the “ultimate” laptop, even though it may technically be better classified as yet another one of these 2-in-1 or 3-in-1 convertible numbers. The keyboard portion of the Surface Book can be detached, leaving you with a Windows 10 tablet, but you get the real magic when they’re together. That’s thanks in part to this funky new hinge with a Lenovo Yoga-like flexibility.

You get the latest Intel Core processor and powerful GeForce graphics, along with a 13.5-inch display, one terabyte of storage, 16GB of RAM, and a magnesium alloy body that screams premium. Unsurprisingly, this thin laptop doesn’t come with a thin price. The base SKU with just 128GB of storage and 8GB of RAM is already $1,500 with the top SKU going over $3,000. And like a Surface, it’ll use that Surface Pen if you’d like too. 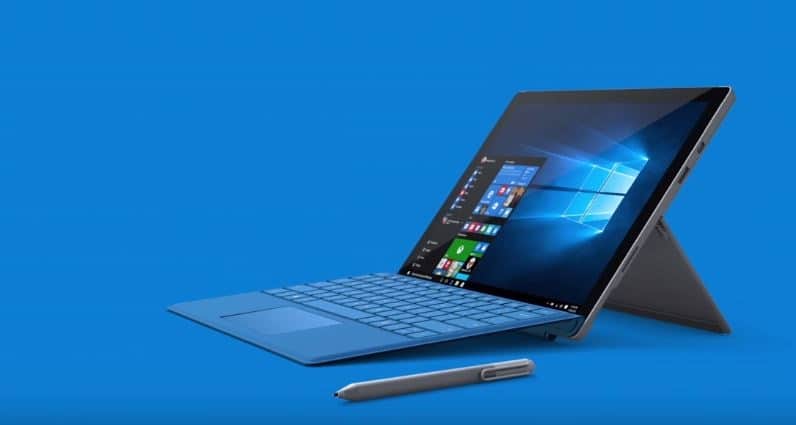 If you’d still like to get into the Surface game and want to shave a few dollars, the new Surface Pro 4 might be more your cup of tea. Unlike the more drastic change represented with the Surface Book, the Surface Pro 4 follows nicely after its Surface Pro 3 predecessor. As expected, it just jumps the specs a few more notches.

This time around, the tablet is suitably upgraded to Windows 10 out of the box. The 3:2 aspect ratio is maintained in the 12.3-inch PixelSense 2736 x 1824 display. Powering the beast is up to a Core i7 processor, Intel HD graphics or Intel Iris, up to 16GB of RAM, and up to 1TB of SSD storage, along with an 8MP rear camera, 5MP front camera, fingerprint sensor, and a 9-hour battery. The keyboard-touting Type Cover is said to be improved too.

Perhaps more usefully, the Stylus Pen can now attach magnetically to the side of the Surface Pro 4 for ease of transport. And it’s got an eraser too. The Surface Pro 4 starts at $799 with shipments commencing toward the end of the month, which is the same time that the Surface Book will start hitting shelves. And yes, you can play Solitaire on either of these. Peep the videos below for a closer look at both new Surface machines.