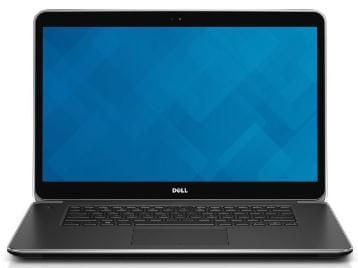 When Dell launched the original slim and sexy M3800 workstation notebook back in late 2013, many people were excited. Especially those of us that have to share elbow room with those “creative types” at the coffee shop with their MacBook Pros. While PC options based on the Windows OS give you tons more options and flexibility, and definitely value, sometimes you just want something slim and pretty to look at. Well, it seems Dell has done it again, with the launch of their updated Precision M3800 mobile workstation!

Like the previous model, the Dell Precision M3800 mobile workstation sports the same sexy composite shell made of aluminum and carbon fiber, but gets updates in the hardware department. For example, the you now get a choice between two beautiful 15.6” inch 10 finger multi-touch screens: A 4K Ultra HD (3840×2160): Dell UltraSharp™, IGZO2, or a FHD(1920×1080): Dell UltraSharp™. Both offer wide viewing angles, LED backlighting, and come with a premium panel guarantee.  But the biggest news is the addition of Thunderbolt 2 support, which allows you to use a range of peripherals including the lightning fast LaCie Little Big Disk external SSD drive which pushes up to 1375 MB/s read and write speeds. This updgrade alone makes it a must have for video editors using Adobe Creative Suite, which this notebook is also fully certified for.

You still get a 4th generation Intel® Core™ i7-4712HQ quad core processor, at least until the quad core broadwell ones are available, and you still get up to 16GB of DDR3 memory onboard. In terms of storage options, dell provides room for two devices inside including a 2.5 inch and an mSATA. That means that you could have up to a 1TB 2.5 inch SSD and a 1TB mSATA onboard. A NVIDIA® Quadro® K1100M with 2GB GDDR5 rounds out the hardware. Overall, the original, made better, and with Thunderbolt 2, it’s now faster than ever.

The Dell Precision M3800 mobile workstation will come pre-installed with either Windows® 8.1 Pro (64-Bit), Windows® 7 Professional (64-Bit) (even though mainstream support has ended for it), and a special developer option that lets you spec it with Ubuntu 14.04 LTS.

In terms of pricing and availability, you should be able to start pre-ordering it now starting at $1949 CAD, so around $1849 USD. Just for fun, we cranked it up, and found out just how quickly, you could blow over $3600 on the top end model with all the bells and whistles. So if you’re sitting beside a “creative type” and he doesn’t have this beside his coffee, he’s a hipster.

Full press release and details of the new shiny mobile workstation to have is at the link below.

“Dell workstation power is behind the work of some of the world’s top animators, film editors and visual effects artists, so at Dell we understand the pressure these professionals experience to deliver more creative output under increasingly tighter timelines,” said Andy Rhodes, global executive director for Dell workstations. “Whether it’s editing video while on location, presenting CAD ideas to customers, or doing 3D modeling, animation and rendering on the road, the Dell Precision M3800 delivers the ideal blend of form and function to meet rising demands for performance on-the-go.”

“Dell is proving to me that they are paying attention to high-end users and offering great performance specs in workstations built for high-end users,” said Cyprian York Sadlon, motion graphics artist and founder of Notch NYC studio in New York. “Now with the Dell Precision M3800[1], I have the processing power needed to go through all my footage and manipulate any photos that I’m currently working on no matter where I am.”

Starting today, the Dell Precision M3800 is available with 4K Ultra HD (3840×2160) resolution and IGZO2 technology on its vivid 15.6-inch UltraSharp™ touch display made with Corning Gorilla Glass NBT, delivering rich, saturated colour and stunning brightness, and enabling customers to view their content in even greater detail than was possible before. With more than 8 million pixels, the 4K Ultra HD screen option is the highest resolution panel available on a 15-inch mobile workstation today, boasting 3.4 million more pixels than the Retina display on the Apple MacBook Pro 15-inch and allowing customers to experience 59 per cent higher resolution. The Dell Precision M3800 display also features ten-finger multi-touch, providing customers with an intuitive way to interact with the workstation.

Dell is expanding its ecosystem by adding a Thunderbolt™ 2 port to the Dell Precision M3800, so users can take advantage of transfer speeds up to 20Gbps, enabling viewing and editing of raw 4K video, while backing up the same file in parallel. Intel’s revolutionary Thunderbolt™ 2 technology delivers the fastest, most versatile connection, simultaneously supporting high-resolution displays and high-performance data devices through a single, compact port.[2]

As film, animation and design projects often require managing large graphic and data-intensive files on-the-go, Dell has added additional storage options and increased total available internal storage on the Dell Precision M3800 up to 2TB, which is double the solid-state drive (SSD) storage capacity offered by the Apple MacBook Pro. Boasting the same unmatched portability and sleek design as the previous generation, the new Dell Precision M3800 has a starting weight of just 4.15lbs (1.88kg) and a form factor that is less than 0.71 inches (18mm) thick. Packed with a 4th generation Intel Core i7 quad-core processor, professional grade NVIDIA Quadro K1100M graphics, and up to 16GB of memory, the system delivers the power necessary to handle even the most demanding applications and workloads.

To demonstrate the performance benefits afforded by choosing a certified mobile workstation for video editing and viewing, Dell commissioned a study from research firm Principled Technologies[3] comparing the Dell Precision M3800 and the Apple MacBook Pro with Retina display across a number of resource-intensive tasks commonly performed in Adobe Premiere Pro Creative Cloud. The Dell Precision M3800 outperformed the Apple MacBook Pro, taking up to 26 per cent less time to transcode video, rendering video sequences up to 30 per cent faster, and dropping less frames during video playback. It also delivered lower surface temperatures when running an intensive workload, and unlike the MacBook Pro, the Dell Precision M3800 is ISV-certified for running professional software applications, guaranteeing optimal performance and support.

Creative agency Sparksight recently replaced its Apple hardware and Final Cut Pro software with Dell workstations and Adobe Creative Cloud software resulting in increased productivity and decreased costs. “With Dell Precision workstations and NVIDIA graphics, now we can turn around projects a lot faster and take on more clients, and that means we can grow and earn more revenue,” said Kelly Shores, CEO at Sparksight.

“When video professionals work with the latest advancements such as Ultra HD and 4K+, they don’t want to be held back by their hardware or software limitations,” said Simon Williams, Director of Strategic Alliances at Adobe. “Adobe’s collaboration with Dell showcases the continued innovations the companies bring to creatives, enabling them to be far more efficient, more mobile, and more fluid in their projects. The result: video professionals working with Adobe Creative Cloud including Adobe Premiere Pro Creative Cloud are now delivering amazing, cutting-edge projects that push all the boundaries. It’s an exciting time.”

The highly-configurable Dell Precision M3800 mobile workstation gives customers the flexibility to build a system tailored to their individualized needs, and starting today the system will be available with Ubuntu as well as Windows 7 and Windows 8.1 operating systems[4]. This is the first time Dell has offered a developer edition of the Dell Precision M3800 and it is a direct result of feedback from the developer community. Developers have been asking Dell to include a larger, high-performance Ubuntu-based system to complement its popular Dell XPS 13 developer edition. For more on Dell’s solutions for cloud developers and what’s new, read on here.

In conjunction with today’s announcement, Dell is partnering with Pitchfork Media to host a two-day event in Park City, Utah celebrating the intersection of film, music and technology and showcasing the company’s technology solutions for the media and entertainment industry.

Dell listens to customers and delivers innovative technology and services that give them the power to do more. For more information, visit www.dell.ca.

[1] Cyprian York Sadlon was selected for an upcoming Dell Precision marketing campaign and was seeded with a Dell Precision M3800 as part of the campaign.
[2] As compared to other PC I/O connection technologies including eSATA, USB, and IEEE 1394 Firewire*. Performance will vary depending on the specific hardware and software used. For more information, go to http://www.intel.com/content/ www/us/en/io/thunderbolt/ thunderbolt-technology- developer.html.
[3] Principled Technologies, December 2014 test report, “New Dell Precision M3800 mobile workstation vs. Apple MacBook Pro with Retina display” – http://facts.pt/PrecisionM3800
[4] Thunderbolt support on the Ubuntu-based version of the Dell Precision M3800 won’t be available at launch but will come available by spring 2015.