Putting the “Compu” in the CompuPrimus AW

In order to integrate laptop carrying functionality into the CompuPrimus AW, the designers took a slightly different route than we’re normally used to. 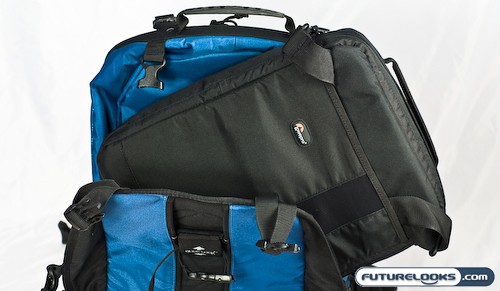 Instead of using a compartment that integrates inside the bag, either behind the straps, or somewhere within the front panel, Lowepro decided to piggyback a totally separate laptop sleeve into the front flap. In the Primus AW, Lowepro tried to sell this as a place to throw your rope and your avalanche gear. We quickly found out from real mountaineers that it was a bad idea; all the stuff would fly out in a slide. However, putting the laptop sleeve there also means that when you have to plop your bag down on a muddy surface, your laptop will be covered in it because the gear compartments are behind the straps. I think someone needs to actually go into the woods with this bag, however in the urban jungle, this isn’t a big deal.

The laptop sleeve is secured with a large Velcro panel to the inside of the flap area for security. If people can run, jump, and stick to it on Japanese game shows, then you don’t have to worry about someone running off with it. Although the sleeve is a separate unit altogether, the zippers allow you to access your laptop with the sleeve attached to the bag without much trouble. 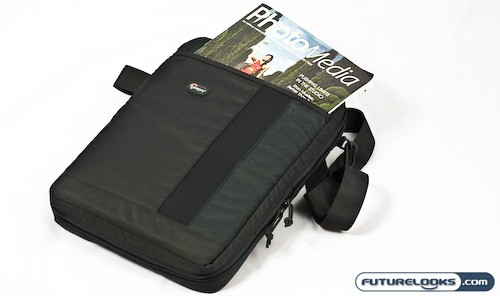 When removed, the sleeve functions as a separate shoulder bag for your laptop with just enough room for a couple of very flat accessories accessories (like a power adapter) or a magazine or book. It features its own strap so you can tote it around without the rest of the CompuPrimus AW if you’re just going for a coffee break at your favourite WiFi hotspot. I did notice that that strap was rather thin compared to the well padded ones attached to the main bag. However, because they aren’t sewn in, you can easily replace it with something more comfortable. At first I didn’t really dig the whole non-integrated thing. However, I quickly started to like not having to lug the whole CompuPrimus AW around, despite the somewhat cobbled on looks. 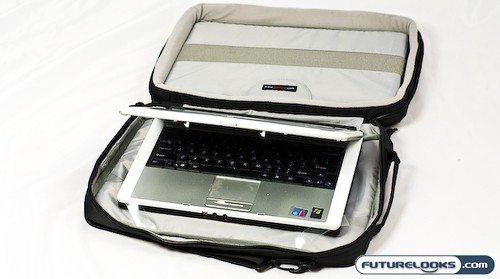 The case is large enough for up to a 15.4 inch laptop and seems tailor made for a MacBook Pro. Unfortunately, anything smaller like our 13.3 inch DELL just seems far too small for this case. Padding is minimal so don’t expect it to save your laptop in a fall to concrete, though you might be alright if it hits the dirt while you’re outdoors. The only thing holding your laptop down in the case are two plastic straps that sit along the corners of the palm rests. 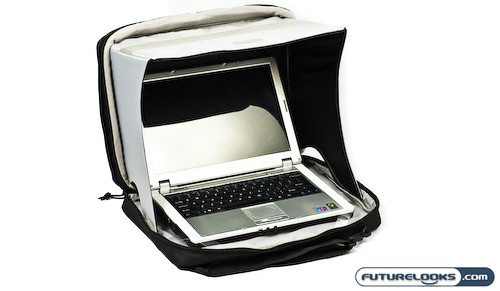 The best feature of this sleeve is the integrated sunshade cover. It’s built right into the case and is a life saver if you’re outside in the sun or in a brightly lit area trying to work on processing your shots. If you’re cursed with a glossy screen, this is definitely a requirement. When not in use, it folds totally flat into the top flap.