At COMPUTEX 2006, we gave VIZO Technology a solid thumbs up as one of the best new companies that we stumbled upon. COMPUTEX is absolutely huge and the fact that this company stood out from the hundreds of tiny booths already makes them special. We met up with them at COMPUTEX 2008 to see what they had in store for us in 2008.

The trend this year has been a move away from hard drive enclosures and into hard drive docks. Earlier this year, Futurelooks checked out offerings from Thermaltake and Vantec and were generally pleased with the results. However, it is fairly certain that this product category will be quickly saturated with copy cats in due time. VIZO has decided to rise above and take a different approach to the hard drive dock category. 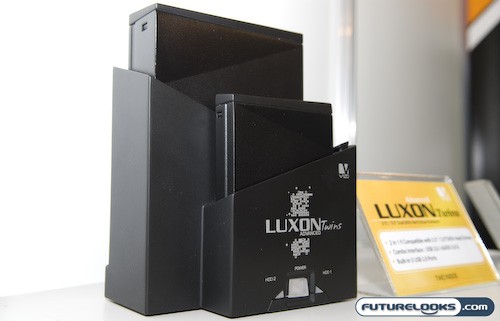 The VIZO LUXON Twins Advanced is a dual bay 3.5/2.5 inch hard drive dock that features a built in USB hub and an eSATA connections. You can use one drive at a time or both at the same time and dual ejection buttons allow you to easily remove the drives quickly. An aluminum enclosure surrounds the drives during use, providing EMI shielding. As mentioned in our previous reviews, it is somewhat hazardous to have your drives running bare, especially when drinks are sometimes consumed at the desk. The shielding also gives the drives some environmental protection in case you’re all butter fingers but are easily removable without tools in case you need to throw new drives in.

The front of the enclosure features individual LEDs for power and independent drive activity. The geometric pattern is actually reminiscent of the new HTC Diamond, one of Taiwan’s other famous products released shortly before COMPUTEX. Although the unit we were playing with was still an early mock up, it was still very well put together.

VIZO unveiled a solid looking multimedia player at COMPUTEX 2008 that features an aluminum machined chassis with a footprint slighty larger than the Apple TV. The unit is fully wireless with 802.11b/g and offers network attached storage and FTP capabilities. The unit plays back most video and audio formats including photos and internet radio. 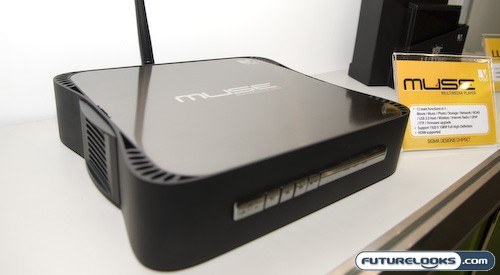 Video output features HDMI and Component up to 1080p along with standard S-video and composite. Audio duties are handled by standard stereo and both COAX/Optical S/PDIF outputs. The unit also has a unique DVD Manager onboard that allows you to playback any DVD “backed up” to it including DTS or Dolby 5.1 tracks. Slap in any SATA or IDE hard drive up to a terabyte and you’re ready to go.

The unit was still under development and final details are still being worked out so we can’t comment on the actual UI or the functionality for the moment.

The notebook cooler market is very saturated. Actually, that’s somewhat of an understatement. On one single floor of the COMPUTEX showfloor, you can probably spot at least a hundred variations. Like the hard drive enclosure market, VIZO wanted to do something special and they’ve totally done it with this products. 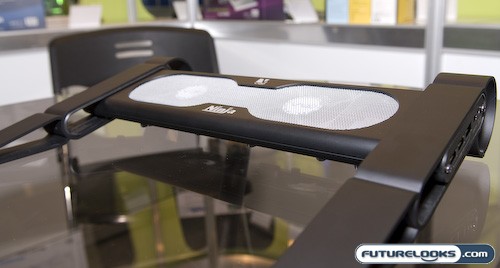 The Ninja DIY Notebook Cooler is by far one of the best coolers that we’ve seen all show. Its imaginative design offers both functionality and quality all in one package. Things like a fully adjustable fan system that adapts to any notebook design from 7 up to 20 inches is just one of many highlights. The unique high quality aluminum machined design is complimented by dual 2000 RPM fans that produce less than 20 dBA of noise. Ad in a three port USB 2.0 hub and rolling feet on the back of the unit that allows you to easily move the unit around and you’ve clearly got one of the best notebook coolers on the market.

The product we looked at was nearly complete and they are in the final stages of tweaking it. We did manage to give them a few suggestions like the addtion of some silicon or rubber inserts in the frame to prevent the unit from marring the bottom of a notebook. Other than that, it looked like it was ready to go.

So as one of the stand out companies in 2006 for us, we’re glad to see them moving along. Their lineup for 2008 certainly contains a couple bright spots and we can’t wait to see them here for testing later this year. VIZO has certainly come far in a short couple years.