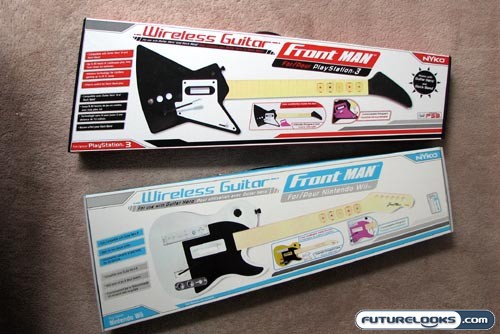 This was a long time coming. A VERY long time coming. Ever since I bought Guitar Hero III for the Nintendo Wii late last year, I’ve been itching to get my hands on a second guitar without having to buy the game-guitar bundle a second time. Even waiting for an official separate guitar from Red Octane took far longer than it should have. PS3 fans were a little luckier though with a far better selection of aftermarket axes.

We first saw the Nyko Frontman for both the Nintendo Wii and the PlayStation 3 at the Consumer Electronics Show (CES) earlier this year. I was hopeful that the wireless guitar would hit retail outlets shortly after that. Unfortunately for all the shredding fans in the audience, it took about another six months before the Nyko FrontMan arrived. Has it been worth the wait? Are there any differences between the Wii and PS3 versions? Let’s find out!

Since I got Guitar Hero III for the Wii before I got Rock Band for the PlayStation 3, I’ll start with the Nyko Frontman Wireless Guitar for the Wii.

As far as I can tell, not much has changed here compared to the version that was being demonstrated at Nyko’s CES 2008 hotel suite. Our test sample had a yellow body and a beige neck, but I did notice that they went with a different approach for the fret buttons. They have also released white version in case yellow doesn’t do it for you or you just want all your Wii stuff to be white. The wireless guitar at CES had solid-colored buttons, whereas the final retail version has fret buttons that are largely the same color as the neck, save for three polka dots. 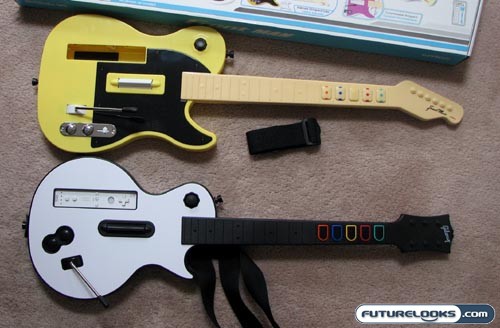 Compared to the version that ships with Guitar Hero III for the Wii, the Nyko Frontman Guitar is slightly bigger, the neck is a little thicker, and the fret buttons are noticeably smaller. Two other observations that I have made about the fret buttons are that they are rounded and have a “softer” feel to them. Taking all of these together, I found that I had more trouble playing the harder songs in the setlist compared to the Red Octane guitar. There was less of a “feel” for where the orange fret button was and “sliding” wasn’t as easy. This was much the same with the PS3 Nyko Frontman as well as they share the same fret board. 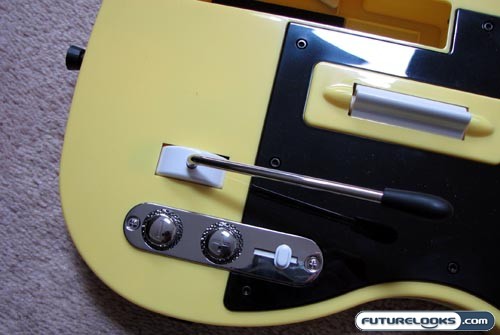 You’ll notice that the + and – buttons have been moved from above the whammy bar to below it for the Nyko Frontman. I have no idea what that white slider next to the + and – buttons are for, because it doesn’t move and doesn’t seem to do anything. I can’t quite put my finger on why, but the Nyko Frontman guitar also feels a grade or two “cheaper” than the real deal. The neck is not detachable either.

On the plus side, the Nyko Frontman Wireless Guitar for the Wii does come with one extra faceplate. On the downside, it only swaps the black portion for a white plate. The unpleasant yellow is there to stay, it seems.