Let’s just put this out there. I’m going to go out on a limb and say that you have more than one WiFi-enabled device in your home. You probably have a smartphone or three, plus maybe a tablet, a smart TV, some WeMO smart home stuff, and a couple of laptops. The problem with a typical wireless router is that it can only serve one device at a time. MU-MIMO overcomes that and Linksys is shipping its first wireless router with that tech.

Standing for Multi-User, Multiple Input, Multiple Output, MU-MIMO effectively enables the new Linksys Max-Stream AC2600 gigabit router (model EA8500) to serve multiple devices with full bandwidth all at the same time. This first MU-MIMO enabled wireless AC router is shipping now and it’s said to ensure “uninterrupted Wi-Fi connectivity to all the devices in the home.” Put another way, it’s “as if multiple devices have their own dedicated router.” 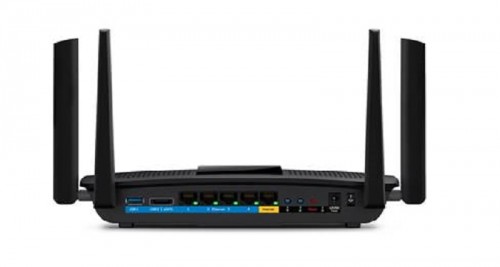 The Linksys EA8500 uses the MU | EFX MU-MIMO technology+ from Qualcomm to provide users with speeds up to three times faster than current Wi-Fi. That’s up to 1733Mbps on the 5GHz band and up to 800Mbps on the 2.4GHz band, combining to provide the AC2600 speeds. In addition to the wireless tech with four removable external antennas, the EA8500 comes with four Gigabit ports on the back, plus a USB 3.0 port and a USB 2.0/eSATA port for network drives.

Watch the brief MU-MIMO overview video and read the full press release below for more information. The Linksys Max-Stream AC2600 MU-MIMO Gigabit Router (EA8500) — what a mouthful! — lists at $279.99 MSRP.

Irvine, CA – May 7, 2015 – Linksys®, the first to sell 100 million routers globally and a leader in networking solutions for the home and business, today announced the availability of the first MU-MIMO enabled Wireless AC router – the Linksys Max-Stream AC2600 MU-MIMO Gigabit Router (EA8500). The new Linksys router leverages the 802.11ac Wave 2 MU-MIMO (Multi-User, Multiple-Input, Multiple Output) technology, which helps ensure uninterrupted Wi-Fi connectivity to all the devices in the home and function as if multiple devices have their own dedicated router. With MU-MIMO, the whole household can play video games, listen to music, check email, shop, stream movies, and more – all at the same time.

The Linksys EA8500 router incorporates Qualcomm® MU | EFX MU-MIMO technology+, which helps to provide up to 3x faster speeds* compared to current W-Fi. The combined 2.53 Gbps Wi-Fi speeds (up to 1733 Mbps for 5 GHz and 800 Mbps for 2.4 GHz‡) help minimize buffering and enable faster downloads. A supercharged 1.4 GHz dual-core CPU and four Gigabit ports offer blazing-fast speeds perfect for heavy-bandwidth wired gaming. Users can attach devices to the USB 3.0 port and a combo USB 2.0/eSATA port for uninterrupted personal cloud content streaming or to share data across their network. The four removable external antennas are adjustable for maximum coverage, while beamforming technology concentrates the Wi-Fi signal to each device for stronger, better performance and increased mobile speed and range.

“MU-MIMO technology revolutionizes the wireless experience in the home,” said Mike Chen, vice president of product management, Linksys. “The average home has more than eight devices connecting to the Internet, and they’re not used for just sending emails and tweets. We’re streaming movies and TV shows in high definition, we’re video chatting with our friends and family, and we’re playing video games against competitors around the globe, all on different devices and often at the same time. To have dedicated bandwidth for their devices simultaneously will enhance the users’ experience so they won’t see that buffering icon when streaming a movie or listening to choppy music or worse, playing games with lag. We are so confident in the experience that MU-MIMO provides that we will be expanding our product line in the future to include more MU-MIMO routers.”

“Qualcomm MU | EFX is designed to greatly improve Wi-Fi performance and consumers’ connected experiences,” said Gopi Sirineni, senior director of product management, Qualcomm Atheros, Inc. “Industry leaders like Linksys recognize the impact that MU-MIMO can have on home networks, and are delivering advanced products with the speed and efficiency to address the ever-increasing number of devices and high-bandwidth applications.”

In an IDC InfoBrief, sponsored by Linksys, titled The Home Network, the Neglected Workhorse, IDC surveyed participants that had at least 3 wireless access users in their household to understand the behaviors of wireless Internet use and how MU-MIMO can benefit multi-user/multi-device households. The research project found that people are doing more on their home networks but are using older wireless technology that is not suited for the type of wireless households today – which are multiple-user/multiple-device households:

More survey results about multi-user/multi-device households can be found here.

What Linksys learned from the survey is that more households are online with multiple devices – and our research showed that there were an average of five devices connected and in use at a time and more than half of users are having buffering and lag issues. People are looking for Wi-Fi that has strong performance, which is why they are willing to pay more for a router that enables them to connect multiple devices simultaneously and not experience any performance issues.

The Linksys AC2600 MU-MIMO router will help address these issues customers are having today and into the future as MU-MIMO becomes the next major Wi-Fi technology in the market. Check out the MU-MIMO video on the Linksys product page found here.

Pricing and Availability
The Linksys Max-Stream AC2600 MU-MIMO Gigabit Router (EA8500) is available at leading retail and online retailers at an MSRP of $279.99.