The second panel of LANcouver 2012 took place bright and early. When I say bright and early, I mean 10AM on June 30, 2012. After all, this is a LAN party and chances are, people slept at their keyboards.

For the most important panel of the LANcouver University curriculum, Futurelooks enlisted the help of ASUS, NVIDIA, NCIX and ANTEC. In order to wake up the masses, we yelled loudly and bribed people to come with offerings of fresh donuts and coffees from a prominent Canadian eatery that specializes in such things, courtesy of NVIDIA.

And as people started to come in, they realized right away that this panel was special and that they had to stick around. Though it could have been the offer of limited gift bags for the first 40 people from NCIX, ASUS and NVIDIA. Or it could have been the promise of bigger and better prizes from the previous day’s Strategies for a Successful LAN Party Experience 101 Panel that kept people sitting. But we’d like to believe that everyone wanted to learn about hardware and that’s what we were hear to do in the Computer Hardware for PC Gaming 101 Panel, which is provided to you in video form above or watch it on YouTube.

A Power House Panel of Panellists 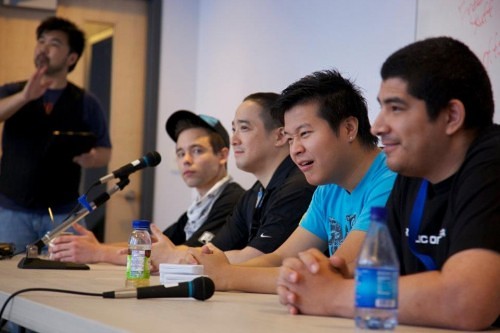 We went out of our way to draft someone each of the big sponsors of LANcouver 2012 and we really wanted to dig as deeply as we could within the 60 minutes we had to spend. Once again, I was on deck to nervously lead the second panel of my adult life. I was made even more nervous by the sheer depth of knowledge and expertise offered by this panel.

All the way from the ASUS Headquarters in California, JJ Guerrero, which you may know from NewEgg TV and ASUS TV on YouTube, graced us with his presence. Well known for his huge wealth of knowledge, he’s never greedy about giving that away. We also had the elusive “Crazy Russian” from NCIX, Ivan Metelitsa, join us. Not only is he the head system designer at NCIX, but he’s also a hard core gamer and a great personality to boot. We were quite lucky to be able to get him to make this rare appearance.

Also on deck was Steve Sung, NVIDIA’s Canada Country Manager who now resides in Toronto. His mission is to spread the good NVIDIA name and in doing so, promote events like LANcouver and PC gaming. Finally, your PC would just be a bunch of parts if it wasn’t for ANTEC. William Au, the company’s Western Canadian Rep, dropped by to give his support to LANcouver and the PC enthusiast community.

With the shear wealth of knowledge on this panel, we ran well over time, but we covered some great topics that every gamer should be aware of to get the best possible performance from their systems. It’s also clear that what JJ knows could fill a panel of its own. We’ll work on that for 2013. 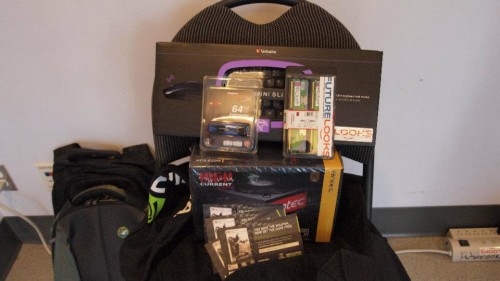 Besides the special gift bag that the first 40 attendees would receive, we also had way more prizes. All the major sponsors of the event contributed something to the prize pile as did Futurelooks. Highlights included bags and T-shirts from ASUS, game coupons and bags from NVIDIA, ANTEC power supplies, memory and USB 3.0 flash drives from Kingston Technology, plus a bunch of things out of the Futurelooks war chest liek the keyboard and mouse combo you see.

Of course, great questions received the best free stuff, but even OK questions got something for the effort. All this simply helps solidify the knowledge that everyone was consuming and you won’t find anyone that disagreed with that at LANcouver.

Videos from the fun non-gaming events are coming up soon and we even help one deserving individual learn how to build their own system. Stay tuned!