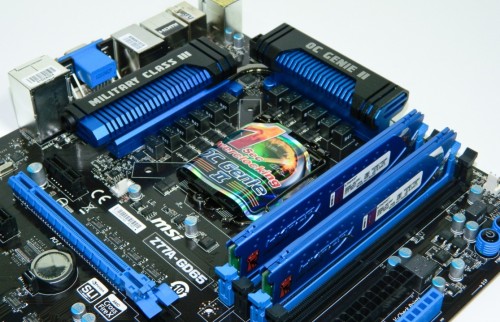 At CES 2012 this year, we saw MSI unveil their new INTEL Z77 series motherboards, which supports INTEL’s 2nd generation and up and coming 3rd generation LGA1155 CPUs. The MSI Z77A-GD65 is now in the labs which means that we’ll be reporting back to you on how well this board does in the benchmarks very soon. That also means that you’ll soon be able pick up one of these new motherboards for yourself and it’ll work with your current 2nd generation Sandy Bridge processor, currently hanging out in your Z68 and P67 boards.

While we wait for Intel’s 3rd Generation processors, our preliminary fun with the current Core i7-2600K has already proven quite impressive. But for now, we’ll tease you with a quick look at this board and some of the things MSI brings to the INTEL Z77 platform.

The list of “Do’s and Don’t’s” for this article, directly from MSI, was pretty extensive. But we did our best to give you what we could. We promise that we’ll dispense all the information we’re dying to give you in our upcoming platform review. But for now, here’s what we’ve got. 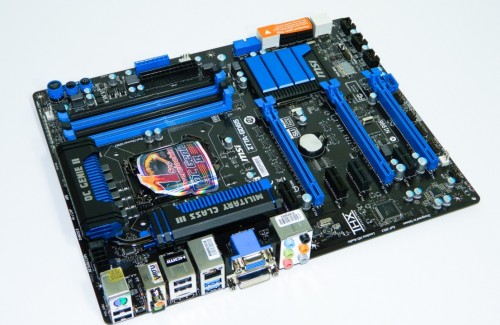 The new Military Class III layout is attractive and has a more efficient layout than its predecessors. There are updates across the range including native SATA6 and USB 3.0 connections as well as updated socket and header placements. While the board offers three PCIE 3.0 expansion slots, it appears the board will only comfortably support 2-way NVIDIA SLI and AMD CrossFireX. The placement of the top two slots will allow better air flow for your video cards while the bottom one will end up covering a number of headers. Keep in mind that the PCIE 3.0 interface provides greater bandwidth only when paired with Intel’s upcoming 3rd generation processors. 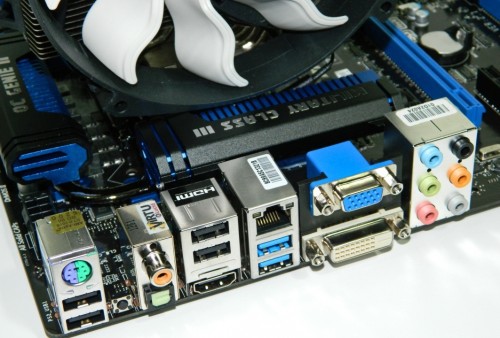 Returning from the Z68 platform is Lucidlogix Virtu as denoted by the VGA, HDMI and DVI port on the board plus the highly successful Intel Smart Response SSD Caching. If you checked out our CES 2012 coverage, the slightly higher end GD80 version may also add Thunderbolt support as one of its upgraded features and price point. But other major features of Intel Z77 will be fairly similar between the two boards. 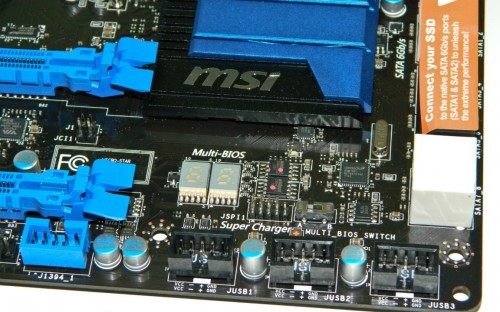 The board appears to offer a better user experience with Multi-BIOS switching via the dual BIOS chips. The platform also comes with an updated ClickBIOS II UEFI interface which should provide some improvements over the first generation. Users should be able to get more out of the board and processor over the previous Z68 and P67 whether it be at stock or overclocked performance.

Speaking of overclocking, the experience continues to be as simple as pressing the OC Genie II button. The internal tuning from this feature is promising to do more than just overclock your CPU. We’ll definitely check that out in our more extensive testing later on. As always, overclocking success will depend on your particular SKU of Intel processor and a little luck. An Intel K or X (Extreme) series CPU as well as a good aftermarket CPU cooler is always a good start.

Unfortunately, that’s where we need to stop. MSI was very specific in what we could provide this early out. But as mentioned, we are already quite impressed with what we’re seeing with an Intel Core i7 2600K. Sandy Bridge testing will continue to give you some idea of how this will fare against Z68 and X79 soon. In the meantime, we’ve taken lots of great pictures so please feel free to browse through the gallery below of what is shaping up to be a great motherboard from MSI. Stay tuned for more previews of other boards as we get ready to welcome Intel’s latest and greatest Z77 chipset and 3rd generation Sandy Bridge processors to the market!